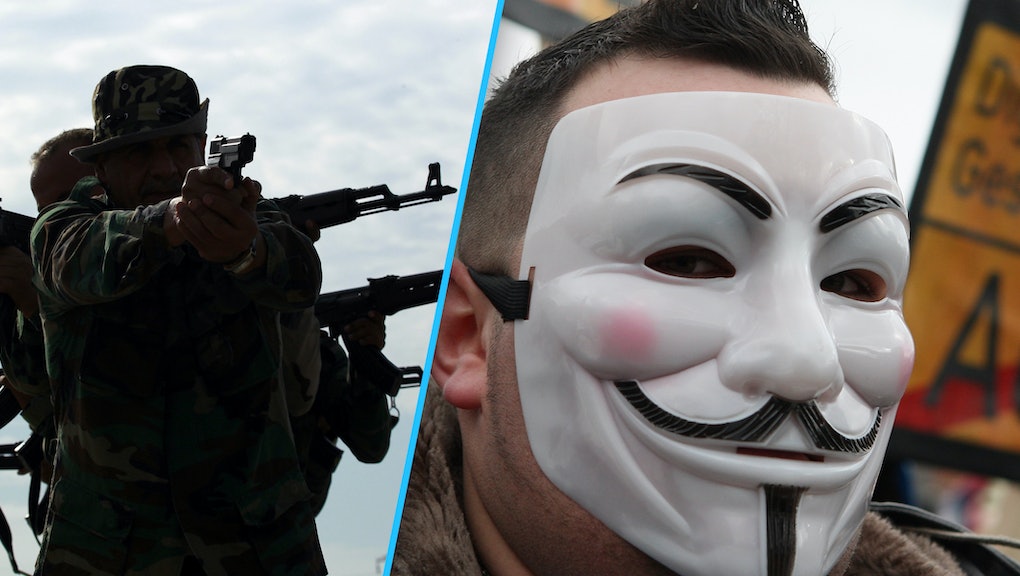 It's almost a cliche at this point: After a national tragedy, government overreach or authoritarian injustice, Anonymous "declares war." In the wake of the massacre in Orlando that claimed the lives of 50 people, Anonymous' most prominent media channel has another message.

What's more, declaring war on ISIS is "silly," a spokesperson for Anonymous media channel @YourAnonNews said in a Twitter direct message. @YourAnonNews criticized the hacktivists taking aim at ISIS, calling them "uncoordinated script kiddies trying to feel important in the world by doing 'something.'"

Anonymous' "war" against ISIS: Throughout 2015, a group of highly organized Anonymous activists organized #OpISIS, an around-the-clock effort by a couple dozen volunteers to identify ISIS Twitter accounts and get them taken down.

"It seems impossible to remove [ISIS] from the internet," said the spokesperson, especially given that "the targeted accounts include academics who do not sympathize with the Islamic State."

A faction of hackers called Ghost Security Group eventually broke away from Anonymous and began working with the federal government to infiltrate jihadi communities and intercept their communications. But other anons involved with #OpISIS, including Ghost Security Group's former allies, insisted that inviting the feds to collaborate was a recipe for disaster.

"Working with the government is deeply stupid because it allows for future infiltration regarding anti-government operations," @YourAnonNews explained. "Only when anons will leak valuable information to the public and not to the government will we be in support of their actions."

But why would Anonymous criticize, well, itself? Because Anonymous isn't a group with a central power structure. Anyone can take on the mask, create a Twitter account, join online chat channels and join in with the loose hacktivist collective.