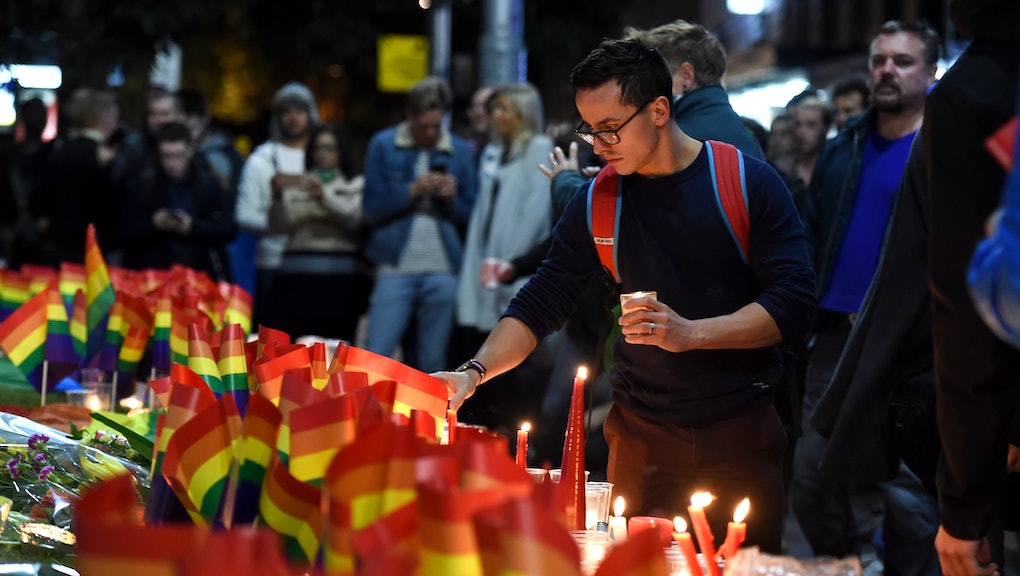 In the early hours of Sunday morning, 29-year-old Omar Mateen carried out the deadliest mass shooting in U.S. history at Pulse, a gay nightclub in Orlando, Florida. Forty-nine were killed; dozens more were injured.

After an attack like this, it's hard to avoid testaments to the physical carnage. We watched news channels broadcast footage of survivors escaping with bloodied wounds. We heard Rep. Alan Grayson (D-Fla.) announce at a Sunday press conference that "there's blood everywhere."

But the Orlando shooting may take an invisible toll, too, on the mental health of LGBTQ people worldwide. What happened at Pulse was a clear act of hate-based violence — and in a historically safe space, no less.

"This is not just the biggest mass shooting in U.S. history — it's a huge triggering event for all of us," Scout, director of LGBT HealthLink, said in a phone call Monday.

"So many of us are survivors of some kind of aggression or violence — and if not, we're definitely survivors of all the micro-aggressions and hate that is currently in the political arena," he said. "So when something like this happens, it triggers all of that."

The shooting may also produce long-term mental health effects, according to Liz Margolies, psychotherapist and founder of the National LGBT Cancer Network. People who directly experienced the attack — or know someone who did — may develop post-traumatic stress disorder symptoms. "The rest of us could be more vulnerable to anxiety and depression," Margolies said in a phone interview.

"It is perfectly natural for most people to be very upset now — and over time, those feelings should subside," she said. "But for some people, the impact will be greater — and will unconsciously stay with them — and can be triggered by going into a club, or years later, they'll hear a sound, and it will remind them."

It's not just the Orlando shooting. Research has found links between other forms of anti-LGBTQ discrimination and dire mental health consequences, according to this 2011 review in the Journal of Homosexuality.

This 2009 study examined how state-level protections for LGBTQ people affected the prevalence of psychiatric disorders among lesbian, gay and bisexual adults. In states without those protections, researchers found a "significantly stronger association" between LGB adults and anxiety disorders, PTSD and dysthymia — or persistent depressive disorder.

"Policies that reduce discrimination against gays and lesbians are urgently needed to protect the health and well-being of this population," the researchers wrote.

The findings were similar in 2010, when researchers looked at mental health conditions among lesbian, gay and bisexual adults in states that instituted same-sex marriage bans in 2004 and 2005.

Compared to a time before the bans were in place, LGB adults in those states showed a 248.2% increase in generalized anxiety disorder, a 41.9% increase in alcohol use disorders and a 36.3% increase in psychiatric comorbidity.

"When you hear religious leaders, politicians and other folks talk about [LGBTQ] people in demeaning ways, there are long-term effects associated with that," Terry Stone, executive director at CenterLink, said in a phone call Monday.

"It has an effect on the way you think about who you are, about your value, about your place in the world," he said.

What you can do: If LGBTQ people are feeling any of those ways, Stone suggests they "reach out to a mental health professional so they realize they are strong, they are powerful, they are good and they deserve respect."

If you're a health care provider who supports LGBTQ folks, it's important to publicly go on record about it, Scout pointed out — even if you're not an expert in LGBTQ issues. "We need a lot more people to stand up and say, 'I may not yet be an expert, but I'm willing to learn,'" Scout said.

If you're an ally, Scout suggests reaching out to your LGBTQ friends and family.