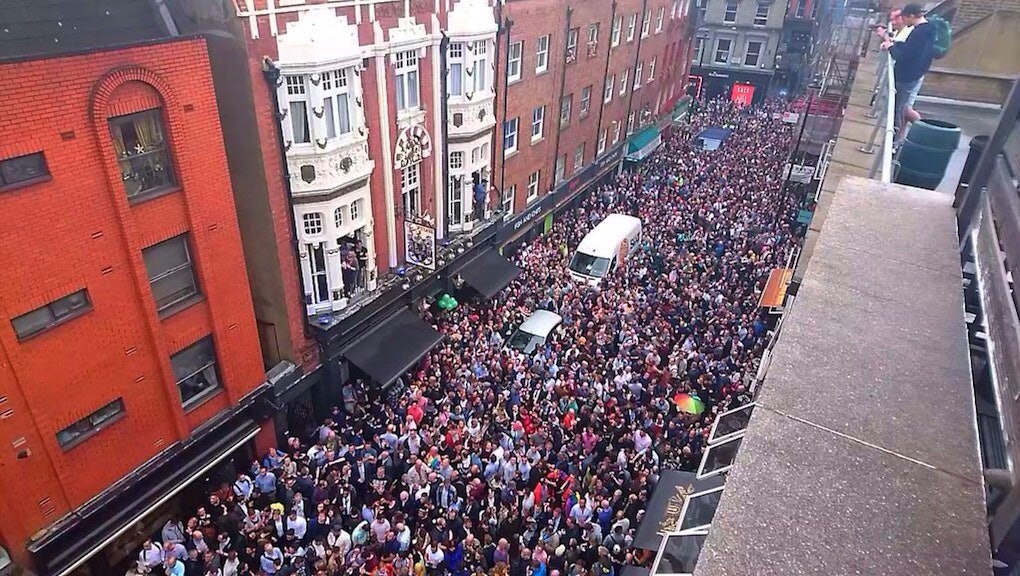 On Monday evening, thousands of Londoners came out in solidarity for an Orlando shooting vigil in the historically gay neighborhood of Soho.

Crowds gathered in and around gay bars on Old Compton Street, an LGBTQ thoroughfare. "They [gay bars] are more than that," Mark, a 50-year-old truck driver, told the Independent. "They are places of safety. They are like visiting family."

A deluge of photos and videos from Monday evening's gathering was shared on Twitter.

The vigil included a performance of Simon and Garfunkel's "Bridge Over Troubled Water" by the London Gay Men's Chorus, which stopped and silenced the surrounding crowds:

The shooting, which occurred early Sunday morning at Pulse, a gay nightclub in Orlando, Florida, was the worst in modern U.S. history and left 50 people dead, including the shooter, and at least 53 injured.

Cities around the world — including Sydney, Tel Aviv, New York and Orlando, among myriad others — paid tribute to the LGBTQ community with rainbow lighting displays on prominent buildings and landmarks. The massacre has largely been seen as an attack on the LGBTQ community, and regarded as a hate crime.

Members and alliances of the LGBTQ community, therefore, have become a significant part of memorializing the lives lost in Orlando.