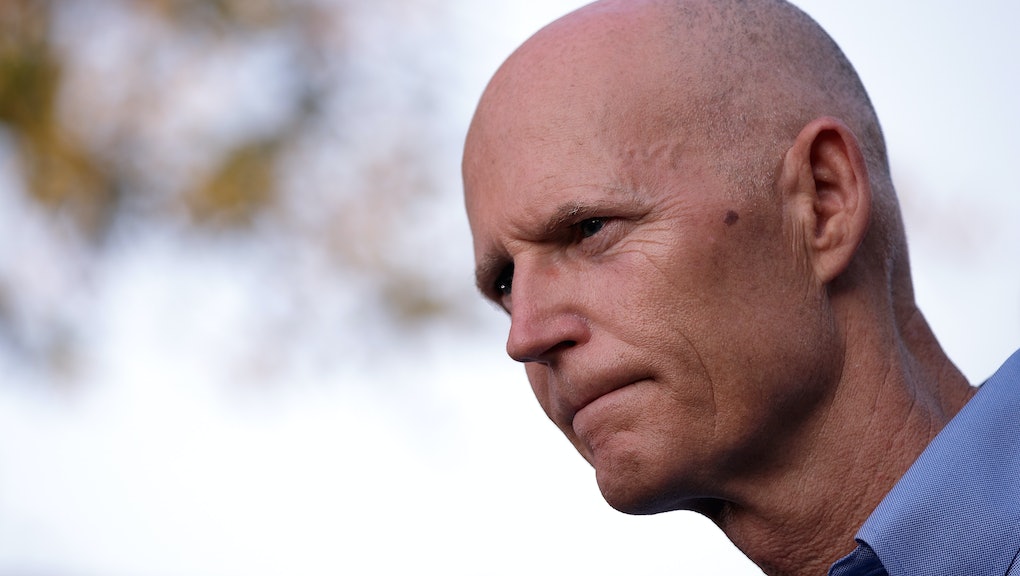 The victims of Sunday's mass shooting in Orlando, Florida — where a gunman entered a gay nightclub and killed 49 people — have met with an outpouring of support from around the world. But at home, legislation in the state where the massacre took place hasn't proven nearly as kind to LGBTQ people.

"Our thoughts and prayers are with the victims, families and all those affected by this horrific tragedy," Florida Gov. Rick Scott (R) said in a statement the morning after the attack.

Yet a few months earlier, in March, Gov. Scott signed into law a bill that prohibits government officials from forcing church pastors to perform same-sex marriages.

This legislation is purely symbolic, not to mention redundant: The First Amendment to the Constitution already prohibits the government from forcing religious officials to perform same-sex weddings. But its passage still highlights the anti-gay animus Florida's politicians harbor, even as they offer hollow condolences to the victims of Sunday's attack.

Not to mention that wasting time on frivolous rhetorical stances like this leaves little space for Florida's governor and legislature to pass laws that protect LGBTQ people from discrimination. In 28 states, including Florida, you can still legally be fired for being gay, for instance.

In February, the state judiciary failed to pass Senate Bill 120, a law that would have added sexual orientation and gender identity to the categories protected from discrimination in housing, employment and use of public accommodations, including restrooms, under the state's civil rights laws.

Lawmakers supportive of LGBTQ rights have pushed to pass similar nondiscrimination legislation for over a decade, but this was the first time it's been voted on in the legislature.

"I think you see the movement changing and just as civil rights generally takes some time to move," Sen. Joe Abruzzo (D-Wellington), who supported the bill, told the Miami Herald. "Ultimately, this will not be an issue one day because this will be the law of the land in Florida."

The Florida legislature's failure to remedy its lack of protection for LGBTQ people speaks to a radical disconnect between how they've mourned these people's violent deaths, even using them to score political points with voters, but failed to guarantee them rights and safety in their daily lives. The year 2015 saw a 20% spike in anti-LGBTQ hate crime homicides. Between that and the Pulse nightclub shooting, its clear America's LGBTQ population is as vulnerable and needing of protection as ever.