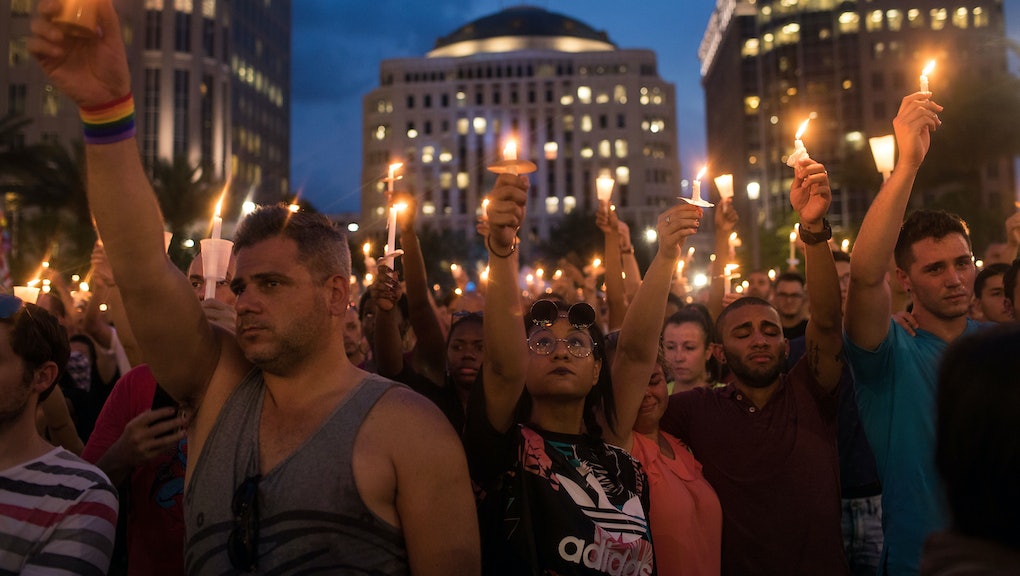 I'm Angry as Hell About the Orlando Shooting. What Can I Do About It?

The news was so terrible, so sickening, that at first I couldn't believe it: In the early hours of June 12, Omar Mateen used an assault rifle to kill at least 49 people and injure dozens more at Pulse — a gay nightclub in Orlando.

Two days later, the initial shock has transformed into another intense emotion: rage. It's a fire licking my insides, and I don't know how to tame it. What do I do with this fury? How do I channel it into something more positive and productive than a fist-shaped hole in the wall?

Read more: After Orlando, I Messaged Every LGBTQ Contact in My Phone. The Response Was Heartbreaking

If you're feeling the way I am, it's normal. "I think we go through those different stages of grief, and anger is one of those," Terry Stone, executive director at CenterLink, told me over the phone this morning.

It may be tempting to internalize your anger over the shooting. Instead, it's important to deal with those feelings, Stone said. There are even ways to do it that benefit LGBTQ folks and victims of gun violence.

"I would urge people to continue to support our LGBTQ community, whether it's by making a donation, volunteering, or attending an event," Sharen Duke, executive director of AIDS Service Center NYC, said in an emailed statement.

Here are some meaningful ways we can channel our anger.

To cope with his anger, Stone is putting things down on paper — namely, letters to politicians and religious leaders asking them to stop using hate speech.

"It's one of the things I want to call folks out on," Stone said, adding that hate speech "does harm to individuals, and causes people to act out."

In the wake of the shooting, Equity Florida set up a GoFundMe page to raise money for victims and their families. It's raised $3.5 million since June 12.

"At this time, it's most important to support the families of the victims and those who are recovering from this heartbreaking tragedy," Duke said. "I encourage anyone who can to make a contribution to the Pulse Victims Fund established by Equality Florida."

Meanwhile, Valentina Monte, a digital marketer at HBO, told me she's "donating more than usual" to the gun safety movement Everytown — among other coping techniques.

When petitions on Whitehouse.gov accumulate 100,000 signatures, the White House reviews and responds to them within 60 days.

This petition asks the federal government to call on Congress to ban the AR-15 from civilian ownership, and has amassed more than 115,000 signatures since June 12. This one, created on June 13, has almost 6,000 signatures.

This petition, created June 12, calls on the federal government to lift the blood donation ban on gay and bisexual men.

Getting a response from the White House doesn't guarantee a change in national policy. But as Stone pointed out, "I think your ability to put your name to something like that releases some of that anger."

One Twitter user, ecologist Nelson Stauffer, said he's using his anger to make the bathrooms at his workplace more inclusive.

At first, Stauffer said he'd been meeting "dead ends and silence." But later in the day, he tweeted me an exciting update:

"When you get out there and do something good for somebody else, some of that anger's going to drain away, and it's going to be replaced with good feelings we all need to feel," he said.

And if we feel hopelessness or despair?

"Together — through grief, sorrow, love, and determination — we can and will rebuild our caring community as a sanctuary," Duke said.

"No matter how much we accomplish and how far we go, we're always going to have some struggles," Stone said. "We've got to find the guts to stand up and say, 'I'm going to stand up for myself, my community and those I love at every turn.'"

Stone has seen successes firsthand. Now in his 60s, he's witnessed massive strides in marriage equality and the status of HIV — issues that may have once seemed insurmountable.

"Life isn't fair, unfortunately," he said, "but we can make it as good as we possibly can."