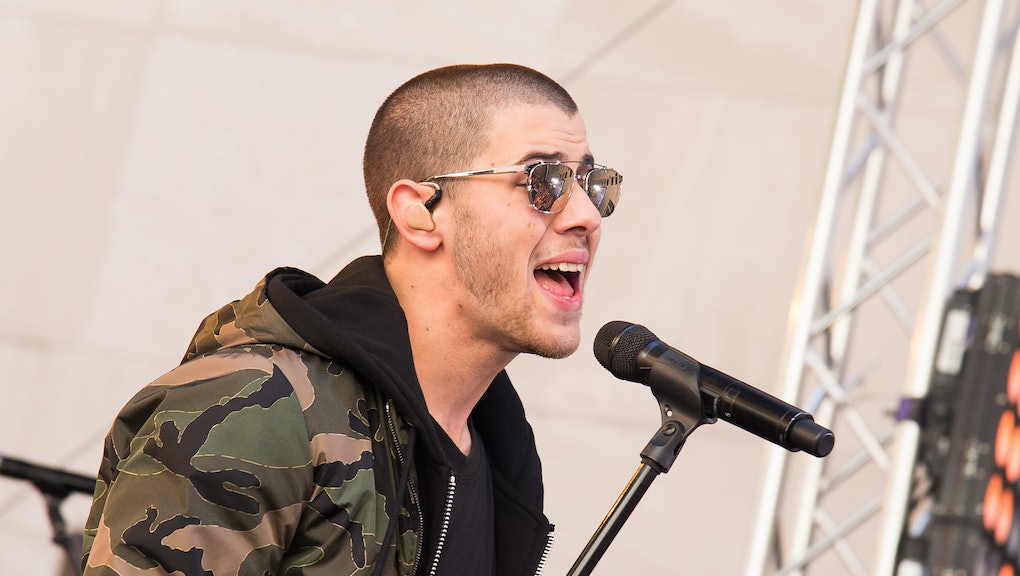 Nick Jonas Spoke at a Vigil for Orlando, and People Are Confused

Why did straight, cis, white singer Nick Jonas speak at a vigil for the victims of the Orlando, Florida, shooting?

It's a mystery the morning after, and it was a mystery to the attendees of the New York City vigil. Jonas stepped on stage for roughly three minutes, according to Mic style editor Evan Ross Katz (who attended the event and took video of the speech). His speech could best be described as "well-intentioned but incoherent'"— and raised serious questions from some attendees as to what his presence on stage really meant.

Throughout the first part of his speech, attendees reportedly shouted names of the victims and yelled "Say their names" — which apparently happened during other speeches as well.

According to multiple accounts, someone yelled "I love you, Zac Efron!" at Jonas.

"When you look out and see the faces here, you know that if we all raise our small voices, we can do a lot of good," Jonas said in his conclusion. "Enough is enough, and I think we're heading in the right direction. Thank you so much for letting me speak, and please know you are not alone. New York is so strong, and we ain't scared of anybody."

While Nick Jonas isn't orignally from New York, nor does he live there now (as of October, he was staying in a house Ellen DeGeneres owns in Los Angeles), he did note his connection to the city in his speech.

"I grew up here in New York City and New Jersey, performing on Broadway shows, surrounded by some of my closest friends from the LGBT community," Jonas said, according to Entertainment Weekly. "My father, a minister from New Jersey, shaped my view that love is love, that we are all equal."

Yet this connection wasn't enough for many, who were puzzled by Jonas' speaking appearance at the vigil.

Part of the problem is the ongoing criticism that Jonas is "gaybaiting" the community. He makes continuous appearances on gay magazine covers in place of actual queer people, gives quotes teasing potential sexual interest in men and plays gay characters on Kingdom and Scream Queens.

So Monday night, just days after his latest album dropped, Jonas took the stage at a vigil for dozens of victims after the worst mass shooting in modern U.S. history. What on earth could he say that would resonate? Whatever it was, he didn't find it — and in the process, he proved a need for more out-and-proud celebrities who could have taken the mic instead.

Jonas showing up to the vigil is a show of respect. Speaking was a mistake, especially considering he failed to mention the victims specifically (as Lady Gaga did at the Los Angeles vigil). The vigil did teach a lesson, however: Being an ally often is not about what you say, but about knowing when to stay silent.

We've reached out to Jonas' representatives for comment on how he came to speak at the vigil, and will update when we get a response.