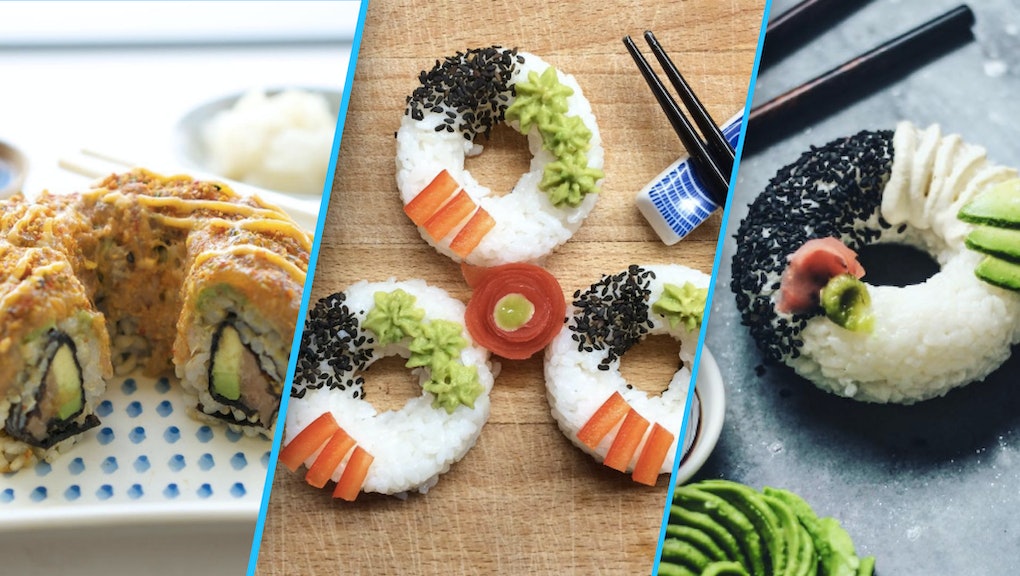 Brace Yourself, the Sushi Donut Is Here

Sushi rice can be molded into just about anything. Artful food Instagrammer @sobeautifullyraw took serious liberties with the malleable product to craft nothing other than sushi donuts. Take a gander, won't you?

This creation is a welcome interpretation of sushi: Donuts and sushi are both beloved in their own right, but the two should probably only be mixed in form and not content. @Sobeautifullyraw's version incorporates rice, black sesame seeds, ginger, wasabi, cashew mayo and avocado, making it fully vegan. (The Instagrammer's food mashup probably wouldn't earn the same praise had she added a Bavarian cream filling.)

Even though chopsticks appear in the Instagrammer's photo, we'd like to be that they're not required, since anything shaped like a donut should be consumed by hand.

Here's a look at some other interpretations of the soon-to-be-trending sushi donut:

Just to be clear: The sushi donut should not be confused with donut sushi. (Yes, semantics matter.) While the former refers to donut-shaped sushi, the latter refers to sushi-shaped donuts. These also happens to look quite delicious. There's nothing fishy about deep-fried, sushi-shaped pillows of perfection. Take a look at the donut sushi below.