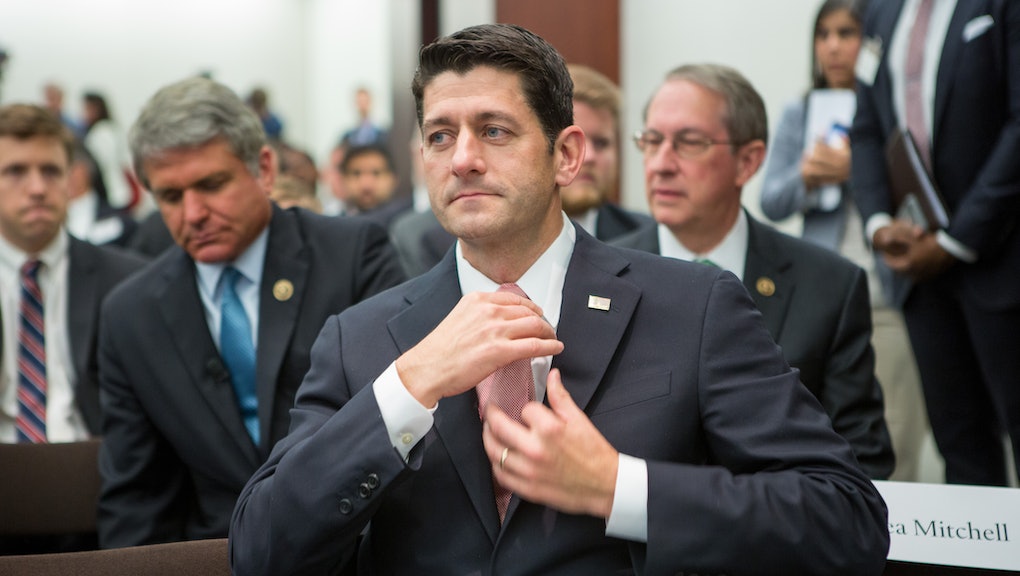 Speaker of the House Paul Ryan, perhaps the most important Republican in the legislative branch of the federal government, issued forceful comments on Tuesday morning in response to GOP presidential nominee Donald Trump's renewed calls for a ban on Muslim entry to the U.S.

Ryan also took the time to implicitly remark on the many colleagues in his party who have downplayed or avoided entirely the LGBTQ identity of the victims of a mass shooting in Orlando, Florida, on Sunday which killed at least 50 people, including the gunman, and wounded at least 50 others.

"This was another act of war against America by radical Islam," Ryan said at a press conference. "At the same time, let's also be clear that members of the LGBT community were the targets. They were simply attacked for who they are. This is an ideology that rejects who we are as a country: open, tolerant, free."

However, Ryan dodged a question on whether a theoretical President Trump could simply enact the ban without congressional approval.

Ryan's apparent rebuke may be more tactical than ideological following widespread dismay over Trump's reaction to the Orlando massacre.

In addition to renewing his calls for a ban on Muslim entry to the U.S., Trump congratulated himself on Twitter for being right about terrorism, insinuated immigrants were broadly responsible for such violence and suggested President Barack Obama has a secret alternate agenda preventing him from fighting Islamic terrorism. The series of remarks did little to help Trump's favor within elite Republican political circles.

However, in November 2015, then-newly minted Speaker Ryan called for a halt to a U.S. program to accept refugees fleeing the Syrian civil war. According to NBC News, at that time Ryan told a press conference "This is a moment where it is better to be safe than to be sorry so we think the prudent, responsible thing is to take a pause in this particular aspect of this refugee program in order to verify that terrorists are not trying to infiltrate the refugee population" — a similar, but less crudely worded, rationale as the one Trump put forward for his ban on all Muslims.