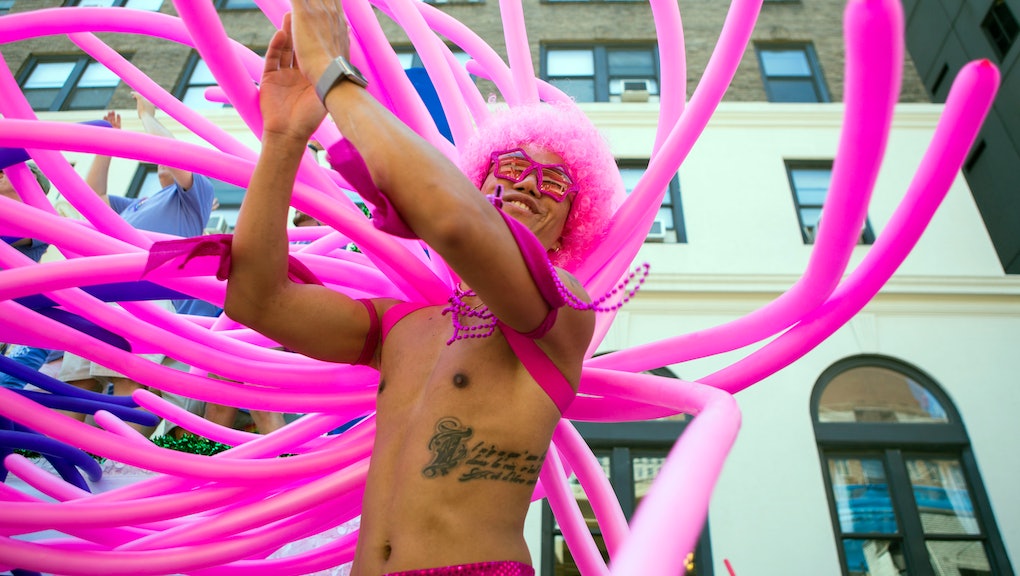 This June has been one of the most challenging in pride history. It's brought months of pain and struggle to an infuriating head. In April, discriminatory legislation in Mississippi and North Carolina has thrust homophobia and transphobia into the national spotlight. In May, birth certificates were burned, and concerts boycotted in protest. And then Sunday, the deadliest mass shooting in U.S. history ended dozens of young LGBTQ individuals' lives.

Every event has only reminded the nation just how much hatred and misunderstanding surrounds the gay experience. But these aren't reasons to show less pride. If anything, pride month should be louder and bolder than ever. These are the songs that will make up its soundtrack, by artists the culture can't afford to overlook during Pride.

Twin sisters Tegan and Sara's latest album, Love You to Death, continues the bright, buoyant synth-pop direction the duo has been exploring since 2013's Heartthrob. While that's an extremely trendy sound, the pair see themselves as being part of a creative vanguard, proving queer women that they too can succeed in pop.

"I wish there were more queer women making music in the mainstream," Tegan told Glamour. "I still feel a responsibility to really push ahead. Not that I want to give in or give up or retire, but there are definitely moments where I wish there was more happening."

Troye Sivan emerged on the scene last December with a striking debut and a simple mission: "I just wanted to write normal pop songs and when the time comes to use a pronoun, I'll use the word 'he,'" the now 21-year-old Sivan told Complex. "A 14-year-old Troye would've definitely appreciated this."

It's a more radical idea than it may seem at first. In a world full of people like Sam Smith, a man who has previously declined to let his identity manifest in his art, and Nick Jonas, a straight white man who is consistently accused of gay-baiting fans, Sivan's comfort with his identity is a small revolution. These telling details he includes on songs, like his June-released single "Talk Me Down," make them that much more personal and poignant.

Anger was one of the most profound feelings seen across the web following the Pulse shooting. No music this month offers a better tool to channel it than the latest release from G.L.O.S.S., Trans Day of Revenge.

Short for "Girls Living Outside Society's Shit," G.L.O.S.S. explores the queer and trans experience and the myriad forms of violence, hatred and ignorance that attempt to diminish it. Their confrontational singles, such as the cathartic "Give Violence a Chance" will resonate with anyone who's ever felt compelled to use their last breath to scream for a better world.

At the beginning of June, New Zealand synth-pop artist Ladyhawke released her third album, Wildthings. Its songs are simple yet high-energy, dealing with subjects like love, insecurity and freedom — sometimes all in one song, like in the album's sunny opener "A Love Song."

Drawing up these stories, she rarely draws inspirations from her own life, as she explained to New Zealand's Stuff. "I prefer to speak in metaphors," she said. "I like implying things, and I like people being able to read between the lines." They lend Wildthings a universal, dream-like appeal, which makes for different stories every listen.

On the very first day of the month, Shura released her "What's It Gonna Be?" video. It's a quirky ode to queer love, showing two friends pursuing their high school love interests. They draw out cheeky plans with magic marker and find private corners of the school to sneak kisses.

Love stories are some of Shura's favorite to tell. "They're things that we all go through, and when we're going through it, we think that we're the only person in the world going through that," she told Complex. "Having that music there sort of reminds you that you're not alone."

Young beat-making prodigy Kaytranada has been on a tear since releasing his show-stopping debut LP 99.9%, back in May. He's since applied his characteristic elastic bounce to tracks from jazz band BadBadNotGood and Rihanna, turning her "Kiss It Better" into a chipper electro pop jam for her dance remix EP.

Later this year, he'll be releasing his .01% mixtape, a fitting compliment to his LP's title, bringing him even closer to that full 100%, which he nodded to briefly during a Fader profile in which he came out as gay. "I've been sad my whole life, but fuck that," Kaytranada said. "I know I have good things ahead. I don't know honestly if I'm fully, 100 percent happy, but I'm starting to get there."

The personality that bursts at the seams of Big Dipper's early hits "Vibin'" and "Drip Drop," earned him a dedicated internet cult following that's been steadily growing since. "I think the internet has offered a huge accessibility to LGBTQ fans looking for LGBTQ artists, looking to connect with someone who they can see themselves in, who can share and reflect their story back to them," Big Dipper told Punk Out, discussing his newfound fame in June 2015. "I think that's amazing!"

His latest, "Good At Sex," relies on campy, raunchy rhymes that leave absolutely nothing to the imagination.