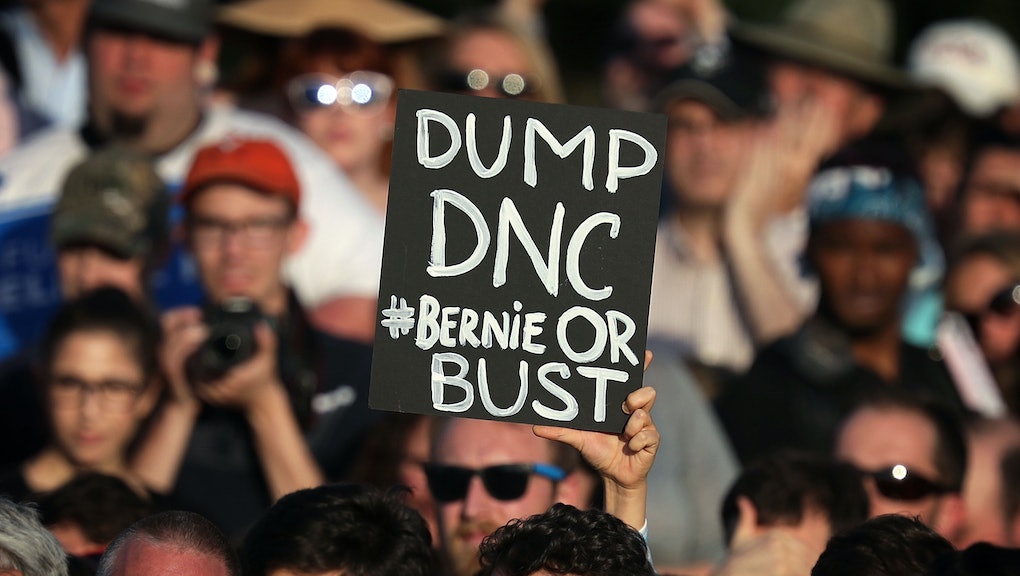 Bernie Sanders Wants to Revolutionize the Democratic Platform — But Do Platforms Matter?

As hope for the Democratic nomination is all but gone for Bernie Sanders, the Vermont senator has set his sights on the next frontier for his political revolution: reforming the Democratic platform.

In a livestreamed speech to supporters Thursday night, Sanders all but admitted his campaign is no longer about defeating Hillary Clinton.

Instead, he vowed to take his campaign to the Democratic National Convention in July to fight to add progressive policies to the party platform before then embarking on the Democrats' badly needed unity tour.

"The major political task that we face in the next five months is to make certain that Donald Trump is defeated and defeated badly," Sanders told his supporters from his home in Burlington, Vermont. "And I personally intend to begin my role in that process in a very short period of time.

"I look forward, in the coming weeks, to continued discussions between the two campaigns to make certain that your voices are heard and that the Democratic Party passes the most progressive platform in its history and that Democrats actually fight for that agenda."

Many of the ideas Sanders is pushing for are already in the Democratic platform. But Sanders could very well push the party even further to the left when Democrats meet at the Democratic National Convention this summer, and in the process deliver his supporters a feel-good win on the issues he's built his campaign on.

Once drafted and adopted, there is nothing binding party members to follow the policies laid out in the platform. In fact, the platform merely serves as a rhetorical device for Democratic elected officials and candidates to point to for what the party stands for.

"Everyone soon forgets it," Jim Manley, a former longtime Senate aide to Sens. Harry Reid and Ted Kennedy, said in an interview. "The reality is, in the end [platforms are] meaningless."

Sure, Sanders could issue threats to Clinton, saying if she deviates from the platform he'd renege on any possible forthcoming endorsement.

He could also run primary challengers against party members who either don't campaign on the policies laid out in the platform, or who actively include proposals counter to the platform while stumping for re-election.

He's built a powerful online donor apparatus that could help him raise money for that effort — an avenue Republicans have taken since the birth of the tea party movement following President Barack Obama's election in 2008.

That year, now-former Sen. Jim DeMint created a group called the Senate Conservatives Fund, which punishes lawmakers who compromise on conservative litmus texts by funding primary candidates to run against them.

The fund has been a thorn in Republicans' side ever since, forcing the GOP to spend millions to defeat candidates who'd likely be too conservative to win their respective elections.

A Sanders' spokesman did not return a request for comment on whether that's a consideration in his post-primary plans.

But that strategy is also fraught with peril.

Creating the liberal version of the fund would likely require the Vermonter to create a super PAC to spend money it raises on television advertising — the same fundraising apparatus Sanders has railed against since Citizens United.

And running primary challengers against fellow colleagues and Democratic candidates would lose him clout in the Senate — where as an independent he's reliant upon Democrats' good will for his plum committee positions.

"Make of the Senate whatever you will, but if he wants to play a larger role than he has in the past he can do so, but he's going to have to change his ways a little bit and stop being such a lone wolf," Manley said.