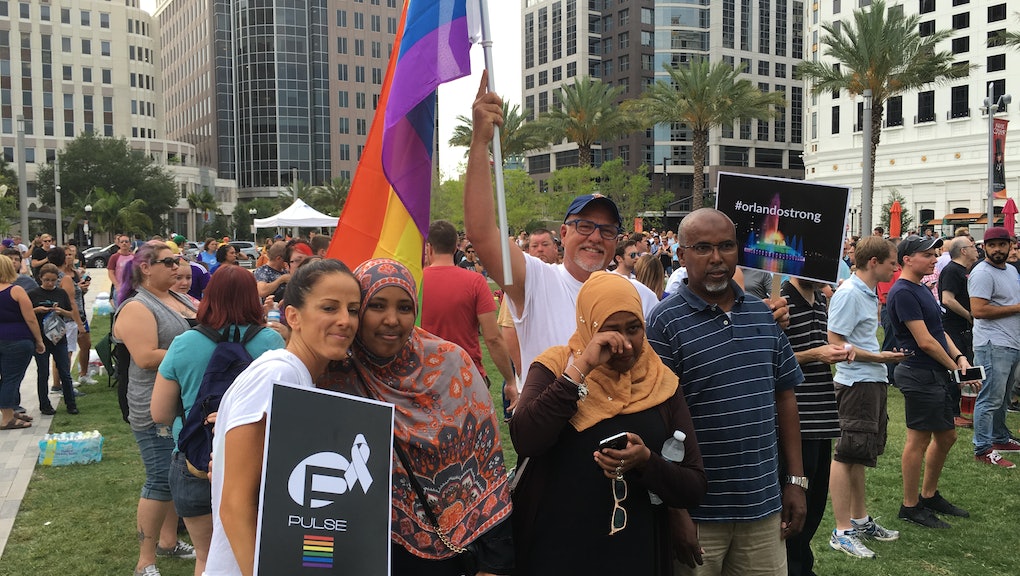 Latino, LGBTQ Muslims in Orlando Are Grieving the Pulse Shooting

ORLANDO, FLORIDA — Diana Serrano woke up before dawn on Sunday to eat breakfast and say her morning prayers in Arabic. It was the seventh day of Ramadan, when Muslims fast from sunrise to sunset.

A native of New York City and the daughter of Puerto Rican and Mexican parents, Serrano, 43, relocated to Orlando 10 years ago and converted to Islam in 2009.

After logging onto Facebook that morning, Serrano spotted a status update from a niece. Her nephew, whom she declined to identify by name out of respect for his privacy, had "made it out alive" from Pulse nightclub the night before. After a moment of confusion, Serrano turned on the news and saw reports of massacre there, now known as the deadliest mass shooting in modern U.S. history.

"The fact that they were Latinos hurt me because these are my people."

"These were innocent people that were killed," Serrano said. "The fact that they were Latinos hurt me because these are my people."

"Forget that I'm Muslim — I put my Latina hat on," she added.

Serrano manages the offices of the Islamic Society of Central Florida, housed in an unassuming brick building surrounded by more than a dozen parking spots, flanked on one side by a carpet depot and an open lot on the other.

Before I could figure out how to ring the bell, Serrano, wearing a hijab and a long black dress, swung open the door.

Serrano clocked me as Puerto Rican and offered me a bottle of water in Spanish. She handed it to me along with a paper napkin, and apologized that it wasn't colder. Although it's Ramadan and she can't drink during the day, Serrano said she can't stand to see someone go thirsty.

Serrano said that many people are often surprised to learn that she is Latina and Muslim. But with an estimated 250,000 Latino Muslims in the U.S. in 2014, the demographic is one of the fastest-growing Islamic populations in the United States. When Latinas call the center interested in converting, they are comforted to hear her accent. "I guess I was meant to have this job to be a bridge, to be a connection to people," she said.

The pain Serrano and Imam Muhammad Musri, the president of American Islam and the Islamic Society of Central Florida, felt in the wake of the tragic Pulse shooting is the same pain that attendees at a June 13 vigil on the lawn of Orlando's Dr. Phillips Center for the Performing Arts gathered to express the pain of knowing that, on that night, gunman Omar Mateen took the lives of Orlando's youngest Latino and LGBTQ people.

As thousands of attendees filtered onto the green lawn outside the performing arts center, two women wearing hijabs and another Muslim man walked through the crowd and posed for a picture with two others — a woman holding a poster bearing Pulse's name and a man with a rainbow sign that said "#OrlandoStrong." As media gathered to take pictures, one of the women removed her glasses to wipe away tears.

During the vigil, Musri expressed grief and solidarity with the LGBTQ communities.

"We are deeply hurt. Our lives are broken," Musri said to the crowd. "We condemn the ideology of hate."

Earlier in the day, blocks away from Pulse nightclub on Orlando's South Orange Avenue, I spoke to Rasha Mubarak, the regional coordinator for the Florida chapter of the Council on American-Islamic Relations, about Orlando's Muslim community and its relationship with the LGBTQ communities.

Mubarak emphasized the tight-knit nature of Orlando's community, noting that Muslims are a thread in its fabric.

"As Floridians, our peace here in Orlando, Florida, has been disturbed," Mubarak said.

Muslims in the area have responded to the tragedy by helping to organize blood drives and starting online fundraisers. Latino Muslims have helped to translate between Spanish and English for victims' families, Mubarak said.

"As Floridians, our peace here in Orlando, Florida has been disturbed."

"We stand united and that's how we're going to fight any kind of bigotry or hate," she said. "There's zero tolerance for it."

Saleena Beharry, a 27-year-old Orlando resident who identifies as Muslim and a lesbian, said in a phone interview that she feels she has to explain to her friends that the massacre is not about Islam. As an LGBTQ Muslim, Beharry said she has wrestled with being a member of two communities: one receiving an outpouring of support and another being scapegoated.

"People are blaming Islam, but people have to understand that everyone is responsible for what is happening, as far as LGBT people," Beharry said. "It's all people targeting us."

"Everyone is responsible for what is happening, as far as LGBT people."

Beharry said the shooter's religious beliefs did not represent an authentic interpretation of her faith. No fact underscores that more than Mateen's decision to carry out the massacre during the holy month of Ramadan.

"It just shows that this person is not doing it in the name of Allah — he is doing it for his own agenda," Beharry said. "You just don't do this."

"We're suppose to be empathizing with people who are suffering around the world [during Ramadan]," she said. "How can you want to kill someone if you're supposed to feel that compassion on a higher level? It doesn't make sense."

"He's not Muslim. I'm Muslim. I would never do anything like that," she continued. "If you kill one person, it's like you wipe out an entire generation of humanity. Look at Adam, Adam fathered the world. Between Adam and Eve, they were the first humans on earth populated. If Adam was killed, there would be no people. It's the same concept for us."

"To kill all these people, he just wiped away generations of people that could've been on this earth," she said.