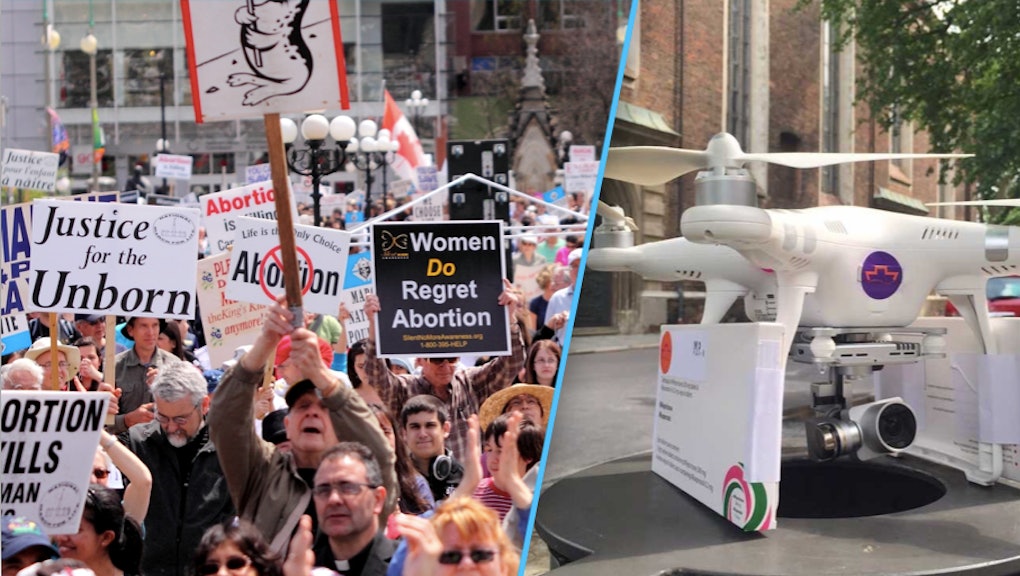 A Drone Is Flying Abortion Pills to Northern Ireland, Where Abortion Is Illegal

A woman in Northern Ireland was given a three-month sentence (the same length of time Brock Turner will serve for sexual assault) suspended for one year for buying pills online to induce her own abortion. That's because abortion is still illegal in Northern Ireland.

So on Tuesday, June 21, a drone will fly from Ireland to the region to deliver abortion pills to spotlight the lengths to which people in Northern Ireland must go to for a safe abortion.

The Abortion Drone is a joint effort between Alliance for Choice, Rosa, Labour Alternative and Women on Waves. It aims to symbolize the obstacles of Irish people living in a region where abortion is illegal.

"It is an all-island act of solidarity between women in the north and the south to highlight the violation of human rights caused by the existing laws that criminalize abortion in both the north and south of Ireland except in very limited circumstances," the Women on Waves press release says.

As stands, having an abortion in Northern Ireland is considered a felony with very limited exceptions —  abortion is only permitted for the "purpose only of preserving the life of the mother."

Following the Abortion Drone's journey next week, there will be a protest in front of the Court of Appeal in Belfast during which the appeal will be heard for the High Court's decision that Northern Ireland's abortion laws "breaches the European Convention on Human Rights," according to the press release.

On June 9th, the UN Human Rights Committee ruled that Ireland's abortion laws violated the human rights of Amanda Mellet — a dual citizen of Ireland and the US who was denied an abortion following a diagnosis of fatal fetal anomaly in 2011, Amnesty USA reported. The UN Committee said Ireland put Mullet through "intense physical and mental suffering" and called on the country to "amend its law on voluntary termination of pregnancy."

The Abortion Drone flight echoes this message that people have a right to sexual and reproductive health.

"Research has shown that abortion pills are safe to use at home until 10 weeks of pregnancy and even if countries restrict access to abortion, women will obtain abortion pills by mail or by drone," Women on Waves said in an email.

And this isn't Women on Waves' first flight — in 2015, it flew an Abortion Drone into Poland, another country with restrictive abortion laws.