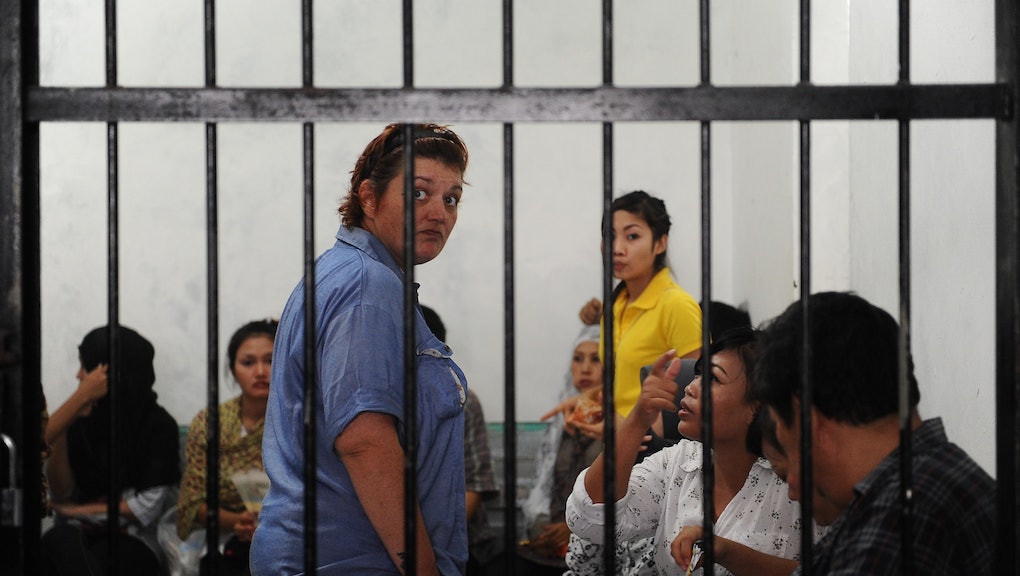 Here's What Relationships Are Really Like Inside A Women's Prison

On Friday, the fourth season of the prison drama Orange Is The New Black will debut on Netflix. Based on the eponymous memoir by former prison inmate Piper Kerman, the series explores the relationships between a diverse group of inmates at Litchfield Penitentiary in Connecticut, a minimum-security women's prison. It also continuously raises the question: is its depiction of prison life — specifically, same-sex prison relationships — accurate?

Mic caught up with several American women who've spent time behind bars to hear about their experiences with sex behind bars. Here's what they had to say.

"Everybody fucks around in prison," 60-year-old Sally* told Mic in a phone interview. "People have more sex in prison than they do on the street."

Sally was in and out of jail for most of her life, starting with juvenile hall in 1972 and ending with a few hours in county jail in 2005. A former homeless heroin addict and sex worker, she's been arrested for everything from fraud to weapons possession, and she's spent time behind bars in numerous states, including California, Florida, Pennsylvania, New Jersey and New York. Since obtaining a college degree in 2002, she's started a program called Way Pass to help former inmates continue their education at San Francisco City College.

Sex and kissing between inmates is illegal, and is technically referred to as a "low severity prohibited act" regardless of whether it's consensual. Yet Sally said many of the inmates she knew not only had sex with each other, but were also involved in long-term relationships. "They all hooked up inside, had long-term relationships with other women. Some kept them on the outside," Sally said. "I also know women who were gay inside together but just really good friends on the street."

None of this means that women prisoners are safe from homophobia. Sally said she often saw male guards target openly lesbian women for verbal abuse, punishment and general mistreatment. "I've seen male guards saying 'you dyke bitch whore' and degrading the gay women," she said. "You can get written up for [lesbian sex]. You can get transferred...don't put it in their [guards'] face."

Maria*, 36, who was convicted of trespassing and possession of a deadly weapon, spent time in a California maximum security prison between 1997 and 1999 when she was just 18 years old. Maria decided to keep her homosexuality a secret behind bars, for fear of abuse from fellow inmates and guards.

"Different prisons in different cities will be different, but I think I was the only lesbian there while I was incarcerated. There's not a high enough population of gay women to be like OITNB. It's completely unrealistic," Maria told Mic in a phone interview. "The one thing that's authentic about the show is when the guards shout 'Inmate, no touching!'"

She lived with half a dozen women in a room, with just an hour of outdoor time and routine meal breaks. She neither saw nor participated in any sexual activity while incarcerated.

"I felt more comfortable being out in the world than in prison," Maria said. "Out in the world you can choose who you hang out with. In prison, God forbid it gets used against you...You never know who's going to be homophobic or violent."

Sally mentioned women using tricks to hide their sexual activity, such as dropping a sheet over their bunks. But female inmates' experiences varied drastically depending on what kind of prisons they were in. While Orange Is the New Black is set in a minimum security prison, many maximum security prisons allow far less interaction and privacy for inmates.

Chandra Bozelko, the 43-year-old blogger behind the site Prison Diaries, had a very different experience from Piper's in a Connecticut high-security women's prison from 2007 to 2014. Since Connecticut has only one women's prison, York Correctional Facility, it has a mix of cells and dorms, the latter of which look more like the set in OITNB, but more crowded.

Bozelko saw widespread sexual activity between both guards and inmates, although technically even being caught holding hands with another woman could be considered grounds for punishment and solitary confinement. "I would say there's homophobia," Bozelko told Mic in a phone interview. "The guards would say 'That's disgusting' [lesbian romance] and huff at inmate relationships."

The truth is, much inmate sex has an undercurrent of violence, which isn't depicted on OITNB. "Some [inmates] beat their wives. There's a lot of domestic violence between female partners," Sally said. "I've seen women raped [by other women] but most of the inmate experiences I saw were voluntary. Then they fight and brutalize each other...being incarcerated is a violent environment...it comes with racism and homophobia."

Bozelko agreed intimate partner violence was commonplace in Connecticut prison romances as well. "They would beat each other up routinely," she said. "No one wants to admit to it because you'll be put in solitary confinement while they investigate, even if you didn't do anything wrong...there's a huge disincentive to report anything."

Sally considers herself heterosexual and avoided what she refers to as the "messy" violence of inmate romance in general, but she did have one prison girlfriend named Elsa with whom she developed an intimate, if not explicitly sexual, relationship.

"I did have a sort of girlfriend at one point but we didn't have sex or kiss...we were very physically affectionate, sitting together with our arms around each other, showering together," Sally recounted. "We presented as a couple to everybody."

Sally said they met "on the inside" and presented themselves as a couple because of the strong bond they shared, not because they feared advances from other women. Their intimate relationship continued through letter-writing even after Sally was released. Elsa was eventually deported to crime-riddled El Salvador, which she had previously told Sally was a dangerous place for her. "I never heard from her again [after Elsa was deported] and I think if she was still alive I would have," Sally said. "We were very good friends."

Sally's interracial relationship with Elsa was unique in a prison culture dominated by racial tension, a segregated dynamic that is echoed by the strict social hierarchy on OITNB.  "I would like to say there were lots of interracial relationships, but that's not the case," Sally said. "There might be hookups but in general the relationships tend to be segregated...but that's not because of the women. It's because of the institution."

Although different facilities had varying amounts of sexual activity between inmates, there was one dangerous trend all of Sally's prison stays had in common: sexually predatory guards. "I've seen women develop relationships with guards, marry guards, seen guards force women to have sex," Sally said. "It was not unique at all. It happened in every single county jail I was in. Every. Single. One."

Statistics on prison rape are scattered and often incomplete. But national surveys by the Bureau of Justice have shown inmates in both federal and county facilities report being victimized by staff more often than fellow prisoners. Out of 146 facilities surveyed in 2007, only 6 didn't have reports of sexual misconduct and the top 10 offending facilities had staff with sexual misconduct rates exceeding 10%.

Sally said she herself was raped twice by two different prison guards in different states, decades ago. Testimonies from the recently released women she works with now haven't given her any hope about the system improving. Prison, she said, provides "a roadmap for victims conditioned to stay silent."

"Most of the women in prison aren't white," Sally said. "Almost every woman I met inside was sexually abused. They've disassociated and they have [mental health] symptoms. They were never on equal footing with a white male. Once you don't have a right to your own body, people can do whatever they want to you and you can't get out."

Bozelko also saw correctional officers charged with sexual misconduct during her years behind bars. Her roommate was allegedly abused every night by an officer for several months, and several times a year at least one such "scandal" would stir up controversy. Even the everyday interactions with guards were laden with misogyny.

"The [Orange Is the New Black] character Mendez is ripped right out of every prison. A guard who talks like 'come-on bitches, come-on sluts,'" Bozelko said. "Stuff like 'you're fat, you don't need any more carbs' is very common."

Bozelko thinks that the policies at her prison discouraged women from reporting abuse. "Reporting it guarantees you're going in the hole [solitary confinement]," she said. "The guard is still allowed free rein of the station to influence witnesses and the investigation while she's looked away for an unlimited period of time. That happened a lot while I was in." She said even if the rapists are put on trial, she's only heard of three officers being punished and they were let off with relatively light sentences.

Both Sally and Maria spoke of feeling powerless, due to dehumanizing policies that strip women inside of their sexual agency. "Even if at some point you manage to hook up with someone on the inside," Maria said, "your physical and mental fortitude are broken down, your standards drop, it probably would be something you regret anyway. There is absolutely not a culture of open sexual expression."

Women who engage in lesbian sex in prison probably fall somewhere on the bisexuality scale, while others may even consider themselves straight and only be acting "gay for the stay." Regardless, their relationships continue despite the prevailing atmosphere of homophobia and sexual violence.

"Anything you do in there, you're never coming from a healthy place," Sally agreed. "There are people who get together for protection, but more to me, I've seen a lot of relationships where people gravitate towards each other for companionship. You need love in there."

*Names have been changed to protect subjects' privacy and allow them to speak openly.