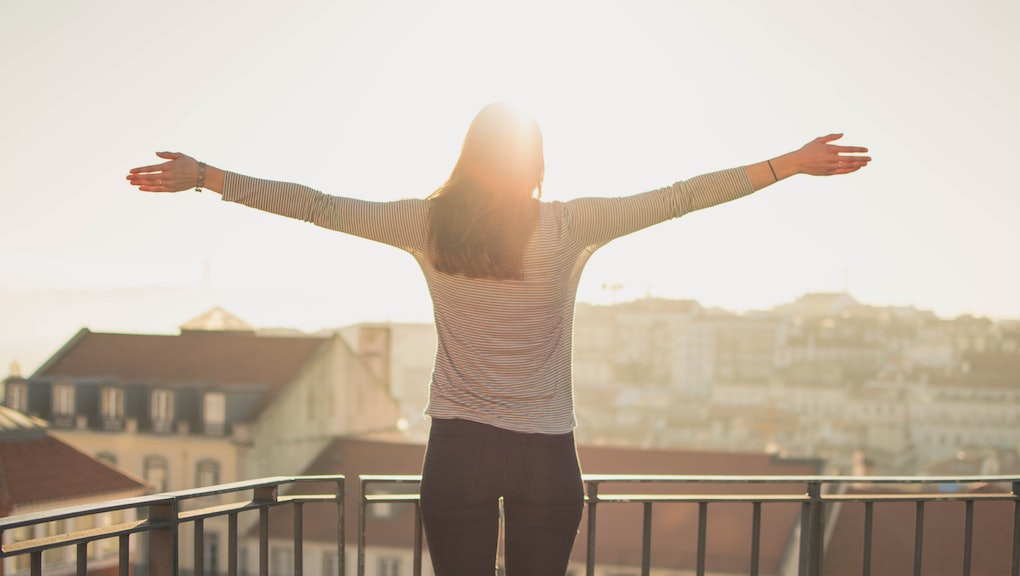 When people find out Lucy Wolf has Tourette Syndrome, their reactions tend to be similar.

"Usually, the first reaction I get is, 'Are you going to start cussing me out?'" the Texas 16-year-old said in a phone interview.

Misconceptions about TS are common, partly due to insensitive portrayals in TV and movies — like Amy Poehler's role in the 1999 movie Deuce Bigalow: Male Gigolo. "The media often portrays it as a cursing disease," Wolf said.

The reality: TS is a neurodevelopmental disorder characterized by motor and vocal tics, according to the Tourette Association of America. The condition, which first appears in childhood or adolescence, is present in an estimated 0.6% of U.S. kids aged five to 17. It's also different for everyone who has it.

I talked to Wolf and Charles Griebell, 16 — both Tourette Association of America Youth Ambassadors — about what it's really like to live with TS.

1. It's not just about spontaneous swearing

In the media, TS is portrayed as "more of a vocal thing," Griebell said. "People think, 'Oh, it's people saying all this stuff that's inappropriate.'"

But coprolalia, "the involuntary utterance of obscene and socially unacceptable words and phrases," is actually uncommon — occurring in around 10% of those diagnosed with TS, according to the Tourette Association.

People with TS can have a variety of different tics, both movement- and voice-related. There's "hopping, clapping, snapping, barking, coughing, sniffing — things like that," Wolf said. "I've met people who had to do certain dance moves as a tic."

2. Tics are like having an itch you can't scratch

Griebell has a tic that involves throwing things, he said. People think he loves shooting objects toward the garbage bin — but in fact, it's more of an uncontrollable urge.

Griebell is using a type of therapy involving "competitive responses," he said — actions he can perform when he feels an "itch" coming on. If a person's tic involved grabbing her hands, she could put her hands in her pockets and press on her legs, instead. "It's not to satisfy the urge, but to deal with the urge until it goes away," Griebell said.

"When you're scratching an itch, you're not only going to scratch it once and leave it alone. It's like a cycle, where the urge sort of builds." — Charles Griebell, 16

When Wolf first started developing noticeable tics at age 14, people had some pretty wacky theories about where they were coming from: everything from "an overdose of red food dye No. 5, to spiritual trouble," she said.

Though the exact cause of TS is unknown, "current research shows that genes play an important role," according to the Centers for Disease Control and Prevention.

"It's hereditary — it's something from my genes," Wolf said. "I didn't catch it from anyone, and I'm not possessed."

4. TS is a real disorder — not a colloquialism

Lots of people — even some of Wolf's friends — will use "Tourette's" as a throwaway phrase after yelling at someone, Wolf said.

"[They'll say], 'I had Tourette's with this person on the phone,'" Wolf said. "I'm like, 'Um, nope, you didn't.'" Any time Wolf hears someone reducing her real medical condition to a colloquialism, "I always make sure to call them out on it and educate them," she said.

People with TS often have co-occurring conditions like obsessive-compulsive disorder and attention deficit-hyperactivity disorder. They may have different styles of learning, but they're as smart as everyone else.

If Griebell finds himself making a lot of loud noises in a classroom, "I have this type of signal with the teacher, sort of like a wink," he said. "I give them a signal, and I'm allowed to go outside in the hallway and sort of chill out. Sometimes I go to another classroom, and then when I feel better, I come back to class."