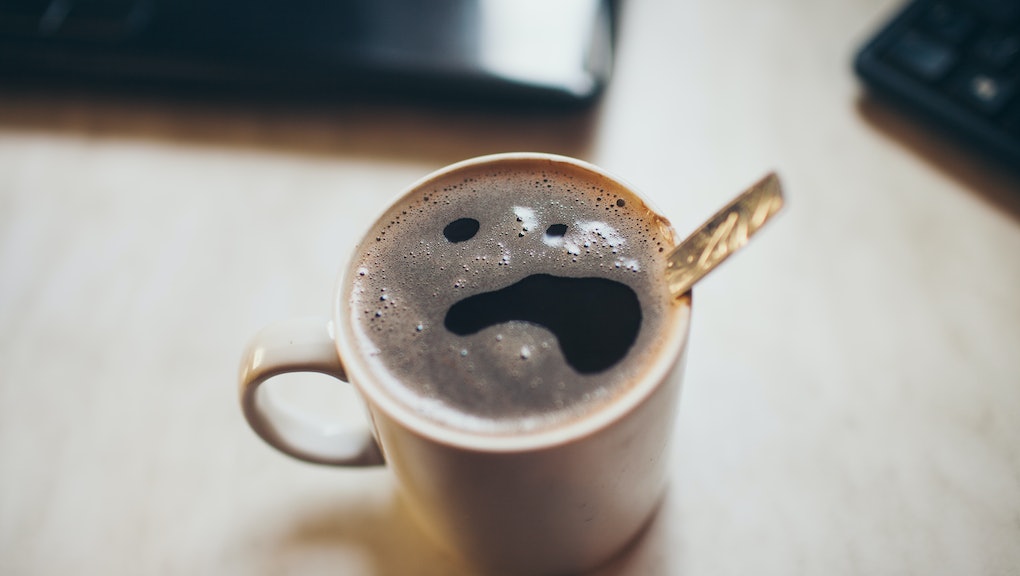 Office coffee has never had a reputation for tasting great. But if it recently started tasting worse, that might be because the beans used to make it are incredibly old, the Wall Street Journal reported. Like ancient.

Here's the deal: Arabica beans, which were stored in warehouses as the coffee market dipped in 2013, are just now being sold, ground up and sipped on. Many of these beans were picked between 2007 and 2013.

"There are some very old coffees that have been sitting around for years that are going out the door," Edgar Cordero, a senior adviser for the Colombian Coffee Federation, told the Journal.

The reason that the old Arabica beans — which are considered to be higher in quality than the kind typically used in instant coffee — are suddenly pouring into the market has to do with their low price point, the WSJ noted.

Old beans aren't necessarily the worst thing in the world. If unroasted beans are stored properly — as in away from extreme temperatures like high heat or severe cold — they can remain "wholesome" for many years, Spencer Turer, the Vice President of coffee research firm Coffee Analytics, said in an email. "[But] as coffee ages it loses aromatics, sweetness, acidity and body." Also, nine years is a long time. Like nearly a decade.

Old roasted coffee beans are the ones to worry about; they go stale much, much faster, Turner wrote. He said when storing roasted coffee for an extended period of time, coffee oils can form on the outside of the beans and coat their storage vessel, and "will become rancid over time." Delicious.

There's some good news: If you drink your java from the local coffee shop, or even a chain like Starbucks, you're not at risk of drinking brew made from geezer beans.

And there's some not-so-good news: The old beans are mostly being sent to companies that supply coffee to large institutions like hotels, schools, offices and vending machines. Yay?

The companies are "expected to combine the older beans with newer ones or roast them longer to mask the taste," WSJ wrote. But don't be fooled; that coffee is still nearly a decade old.

So sure, sticking to the java offered in your office may save you nearly $1,000 a year — but is getting your caffeine fix from coffee beans picked from a time before the song "Single Ladies" even existed really worth it?