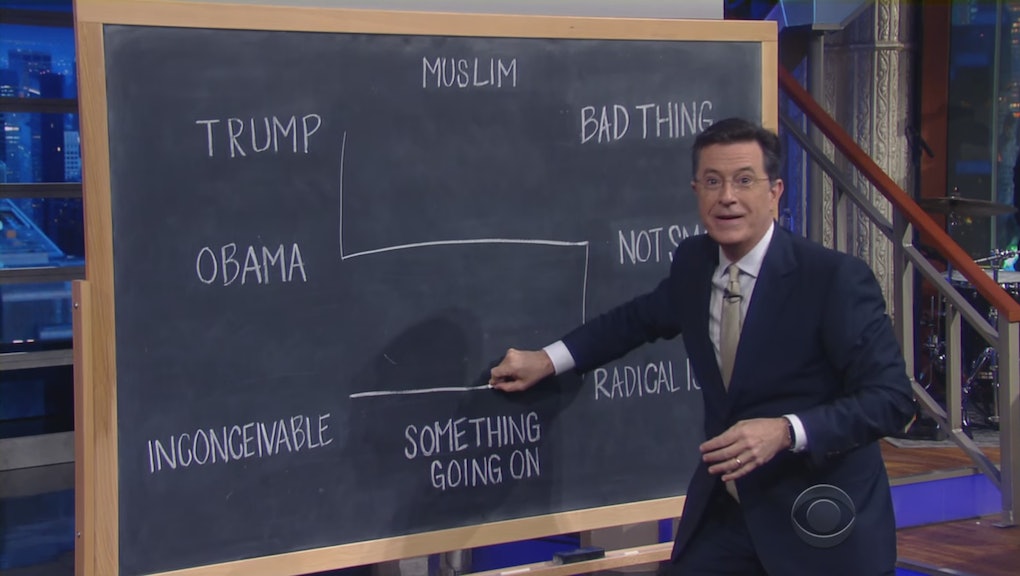 Viewers who missed the acerbic wit of The Colbert Report finally got their moment Tuesday night, when Colbert finally let loose in the wake of our nation's deadliest mass shooting.

The Late Show with Stephen Colbert, which has taken some heat for restraining its eponymous host from the biting commentary of The Colbert Report, finally unleashed Colbert on presumptive Republican presidential nominee Donald Trump's appalling, conspiracy-tinged reaction to a mass shooting in Orlando which resulted in 50 deaths (including the shooter).

"This whole speech, with its nativism, its fear-mongering and especially its self-aggrandizing in the face of tragedy, feels like a new low," Colbert quipped. "It makes me long for the days when Trump was just bragging about the size of his penis."

"Trump's speech, unbelievably, was the least controversial part of his reaction to Orlando," Colbert continued, playing a clip of Trump insinuating "there's something going on" with President Barack Obama's motivations and responding "We'll let people figure it out" when asked what he meant.

Taking a page out of the Glenn Beck playbook, Colbert proceeded to "bring out the Figure-It-Out-Atron 5000, guys! ... Before I figure this out, I've got to think like Trump, so first, I'm not going to take my meds! Okay, woo! I see patterns where none exist!"

The graph started out innocently enough...

...but as the sketch went on, it became clear just what kind of pattern was emerging.

"No no no, that can't be it," Colbert continued, drawing a new pattern on the board. "There's gotta be a simpler answer."

"I don't know what it is," the host concluded. "But I hope Trump explains it soon. Because until he does, that kind of looks like he's an asshole."

Watch the whole sketch below: