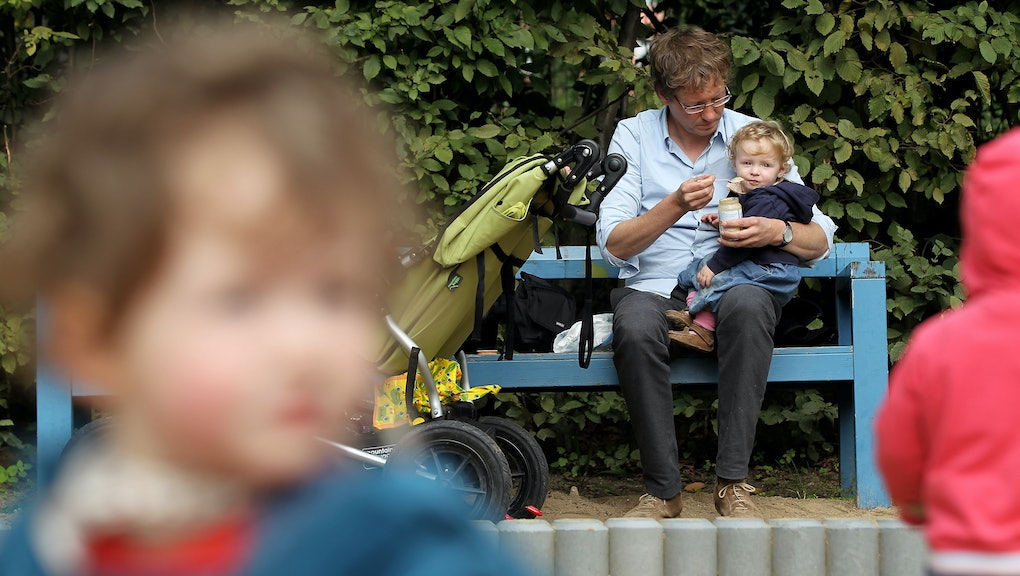 Here's Why Paternity Leave Is a Huge Feminist Issue

When he had his second child, 36-year-old graphic designer Jonas Downey was granted six weeks of parental leave by his employer.

"It made a huge difference," Downey told Mic in a Skype interview. "When we had our daughter, my wife quit her job because they wanted her to go back so soon... [This time] we didn't have this panic, trying to make everything work."

Downey works at a tech startup with a progressive paternity leave policy, which allowed his company to plan in advance how work would be handled in his absence. Now that he's back in the office, Downey believes granting paternity leave helps the company retain skilled employees and support their workers in challenging inequality as a whole.

"I think a lot of dads want to be heavily involved [with childcare] and need to be involved but societal expectations haven't caught up," Downey said. "If more dads had this opportunity we would realize the responsibilities of mother and father can be more fluid. It doesn't have to be strict gender roles."

Downey's experience is not unusual — but taking extended paternity leave is more uncommon than you'd think. A nationwide Department of Labor study found that more than 70% of new fathers took 10 days or less off work, and of men who took leave only 13% received pay, compared to 21% for women. Although federal lawmakers have yet to address the lack of parental leave legislation, several city officials are stepping up to address the gap in their local communities.

"Atlanta has done it, Austin has done it, Boston has done it...for me, it was a weird thing we didn't have it," Councilman Anthony Davis, who sponsored the Nashville resolution, told Mic in a phone interview. "I think cities have to lead the way. Government needs to lead the way...It's shameful that all private employers don't do that [parental leave] in this country."

Davis specifically had same-sex couples in mind while working on the legislation. "We want to be inclusive," he said. "It does help with gender equality. Don't forget about dads and LGBT couples too. We need to be thinking about equality while making policy."

Davis is himself the father of a 21-month-old baby girl. He's also a business owner as the head of a small web design house and a brewery. In his experience, granting employees paternity leave actually boosts business in the long term, an observation supported by numerous economic studies. "We never had an issue. It gets tight as a small company, but people came back charged and more productive," he said.

While the benefits of a paid paternity-leave policy for young fathers are apparent, there are also less obvious benefits for women as well. According to an international study surveying 22,000 companies, sponsored in part by the Peterson Institute for International Economics, countries with the highest percentages of women in leadership offered 11 times more paternity leave days than those at the bottom. Researchers concluded that "women experience less disruptions in their careers and are more likely to make it to the top" when men take paternity leave, The Huffington Post reported.

California software developer Dave Porter believes his six-week paternity leave helped him challenge sexist expectations in his own life. "Pressures of masculinity run counter to nurturing," Porter, 33, told Mic in a Google Talk interview. "I definitely felt more comfortable making faces at my kid after five weeks alone with him...Having those skills and that confidence helps me balance responsibilities with my wife."

Porter strongly believes paternity leave helps promote greater gender equality for parents in general. He hated it when strangers in public asked him "where's the mother?"

"'Well, she's at her fucking job, isn't she?," Porter recalls responding. "The less that we treat nurturing as part of mothering, and the more we treat it as part of parenting, the less of that bullshit that mothers at work will have to swim upstream against."

Downey says he "absolutely" considers paternity leave a feminist issue. "The reason we don't have paternity leave is because of misogyny and a patriarchal society," he told Mic over the phone. "I came away so happy and grateful [to] see the nurturing capacity I really have."

Celebrating fatherhood with official paternity leave policies challenges traditional gender roles, promotes LGBTQ equality and empowers parents in the workplace. It's one of those rare issues where men's rights activists and feminists can find common ground with a mutually beneficial cause.