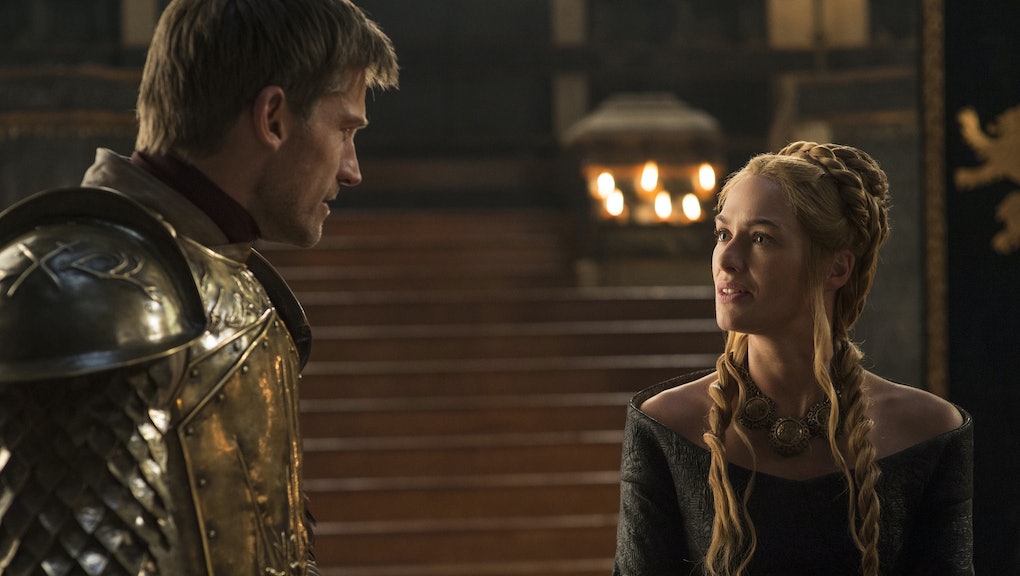 This ‘Game of Thrones’ Theory Posits a Twisted, Full-Circle Ending for Jaime and Cersei

Game of Thrones' flagship couple, which naturally on such an unsettling series also happens to be incestuous, has seen better days in Westeros. Jaime and Cersei Lannister have lost two of their three children, and have fallen out of the good graces of their third, King Tommen. Over the last few episodes, Tommen has removed Jaime from his position as Lord Commander of the Kingsguard and thrown away Cersei's option to elect that her forthcoming trial be decided with a trial by combat, essentially dooming her to punishment.

Despite all the turmoil currently facing the Lannister twins, the one thing that's stayed consistent throughout the show is their devotion to each other. As Jaime plainly stated to an imprisoned Edmure Tully on Sunday's episode, he'd do anything to be with her (viewers have been keenly aware of this fact since the pilot).

However, some fans are theorizing that the duo's romance will have a heartbreaking conclusion befit for a Greek tragedy, and that we may see it come to fruition by the end of this season. As redditor RobertGoulet850 explains in his version of the highly popular theory, Cersei will burn part of King's Landing to the ground with wildfire; Tommen will be killed; and Jaime, in all his rage, will choke her to death and die himself shortly after.

At surface level, it sounds rather presumptive given their current status in the show. However — like most of Cersei's personal misfortunes — its validity harps back to the witch's prophecy from her childhood, nearly all of which has come to fruition thus far. Cersei did marry a king and had three children, while Robert had several more bastards. It also stated she'd lose everything to a younger, more beautiful queen (many interpret this to be Queen Margaery) and that all of her children would be killed.

With two of her children already dead, Tommen's death now feels ominously imminent. However, an additional part of the prophecy from George R.R. Martin's novels that was omitted from the show was her own eventual death. Per the witch, "the valonqar shall wrap his hands about your pale white throat and choke the life from you."

The key here is the term "valonqar," which in High Valyrian translates to "little brother." Now, it's clear from Cersei's actions that she perceives the valonqar to be her little brother Tyrion, but Jaime could also technically be the valonqar, since he was the latter twin to leave their mother's womb.

Jaime's motivations for killing Cersei would make sense in light of Tommen's decision to remove trial by combat as an option for her trial, coupled with her conversation with Qyburn when he informs her that the "rumors" he was investigating are true. If these rumors happen to be related to wildfire that was stored in the Red Keep by the "Mad King" Aerys II Targaryen, it could be her last-ditch effort to escape her trial and, ultimately, to kill the High Sparrow. It would also give payoff for all the times Cersei has threatened to literally "burn cities to the ground" for her family.

But like the substance's infamous volatility, the plan could lead to some unwanted consequences or unexpected deaths. This could include Tommen, and regardless of the extent of the damage to King's Landing, the theory stipulates that Jaime will kill Cersei for hatching such a demented plan and will in turn come full circle on the moment that defined his character and earned him the name "Kingslayer": killing the Mad King to save thousands of commonfolk from wildfire.

If true, the twisted irony of Jaime telling Cersei "fuck prophecy, fuck fate" would culminate with a chain of events leading to the very death that she's been so consciously aware of since she was a child. It's certainly cruel, but as Ramsay Bolton so eloquently put it, this isn't the type of show that doles out happy endings.