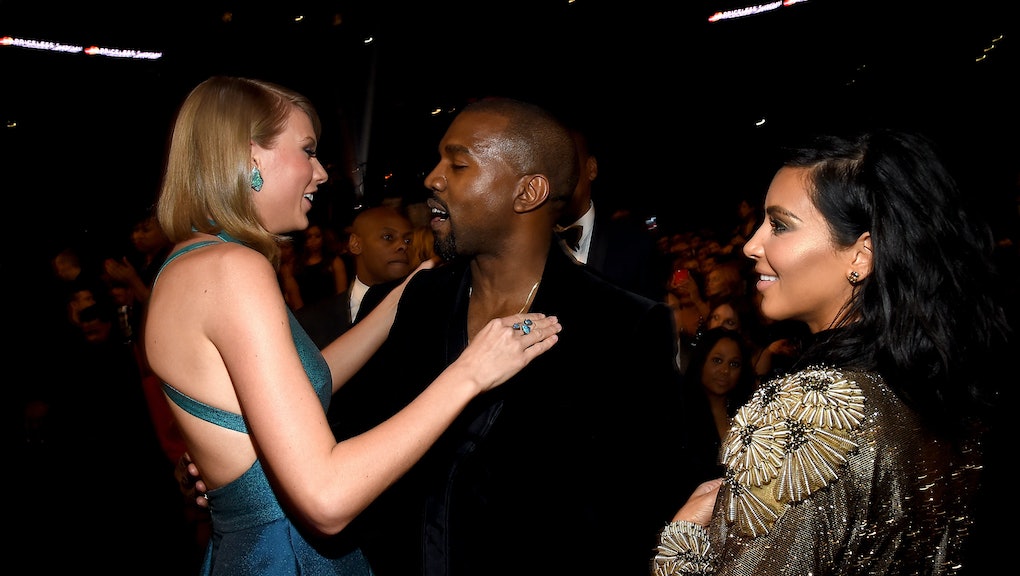 The GQ profile of Kim Kardashian West is a masterwork of iconography. Over the course of the article's nearly 5000 words, Kardashian West invites a reporter to feel her breasts so they can describe the feeling in prose, slings light shade at a U.S. president and lets carefully chosen secrets slip. The most direct and damning of these has to do with one very powerful pop star: Taylor Swift, an artist with whom Kardashian West's husband Kanye West has had a long, trying history with.

The subject Kardashian West speaks to specifically was the brief spat surrounding Kanye West's "Famous" in which West rapped, "I feel like me and Taylor might still have sex/ Why? I made that bitch famous."

You may remember that when the song first dropped, Kanye claimed in a Twitter rant he had run the lyric by Swift and she had approved it. Swift's spokespeople called that account bullshit, saying she had "cautioned him about releasing a song with such a strong misogynistic message."

Kardashian West has now resurrected that months old beef, calling Swift's account a straight up "lie" — and she says she has receipts to prove it.

West apparently always has videographers on hand when he records an album, and this Swift-West conversation was part of the filming. Swift's team has been going through some great lengths to make sure that evidence never sees the light of day.

"She totally approved that [song]," Kim told GQ. "She totally knew that that was coming out. She wanted to all of a sudden act like she didn't. I swear, my husband gets so much shit for things [when] he really was doing proper protocol and even called to get it approved."

Their little agreement was originally supposed to have Swift reveal she was in on the joke at the Grammys. "When I get on the Grammy red carpet, all the media is going to think that I'm so against this, and I'll just laugh and say, 'The joke's on you, guys. I was in on it the whole time.'" Kardashian West claims Swift said.

But instead she took the Grammy podium accepting her award for album of the year and warned the young women of the world against men who would try to "undercut your success or take credit for your accomplishments, or your fame."

Kardashian West isn't exactly sure how Swift's team found out that they had the video, but apparently her attorney sent West a letter threatening, "Don't you dare do anything with that footage." Kardashian West claims Swift's people were "asking us to destroy it."

The whole encounter feels like an episode of House of Cards, or a minor backstabbing in Game of Thrones. Whether or not it's true (Kardashian West never actually produces the tape for the reporter) it shines a light onto how high-stakes the power moves between stars can be. The Swift and Kardashian West empires are two of the biggest in pop culture. If Swift is still as willing to stand up to her rivals as she was during her "Bad Blood" days, then the shade fest is likely just getting started.