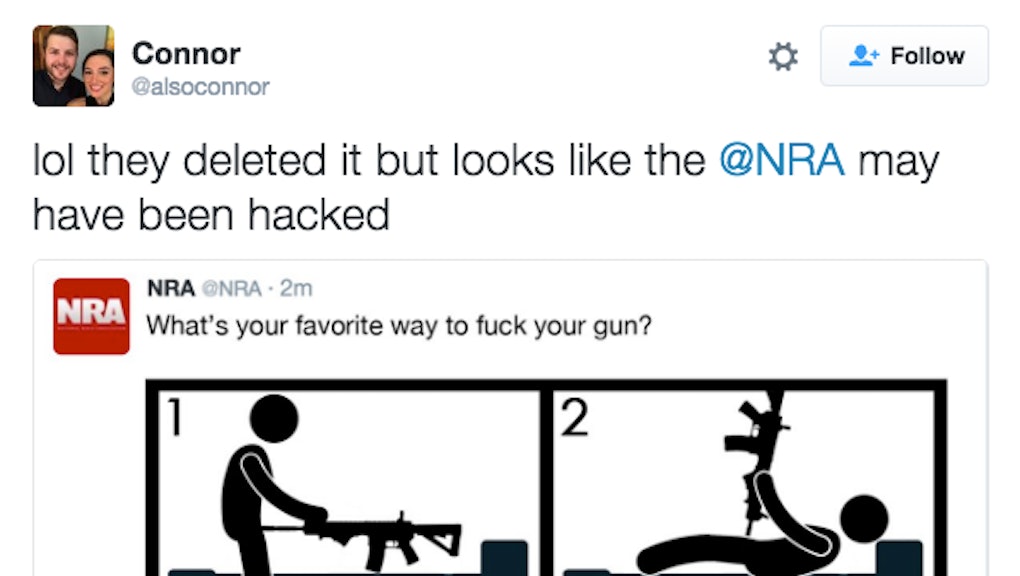 This "Hacked" NRA Tweet Is Fake as Hell but Still Amazing

What's your favorite way to make sweet love to an assault rifle? Is it standing or straddling? Or lying back, leaning on the headboard, holding the military rifle's handguard, tenderly penetrating its barrel? Perhaps you're the type of gun owner with a flair for sexual gymnastics, adept at balancing your gun on its butt end, lodging yourself inside it and bracing yourself on the magazine well as you spin in circles and thrust? Or do you keep it vanilla?

The above meme, a sort of Kama Sutra for the Second Amendment, was supposedly posted by whoever perpetrated the hack.

The tweet quickly went viral, racking up thousands of retweets and likes by Thursday morning. It's easy to see why: If the hack were real, it'd be pitch-perfect satire, commenting on the near-fetishistic treatment of assault weapons by gun lovers and the NRA itself, even in the wake of shooting sprees like the attack in Orlando that left 49 dead.

If only. But for a real-life sample of gun obsession from the right, look no further than the homepage of NRANews.com, which features a segment on the AR-15, a military weapon that was never meant to be in civilians' hands, titled "The AR-15: Americans' Best Defense Against Terror and Crime."

Mic reached out to the NRA, which did not return our request for comment.