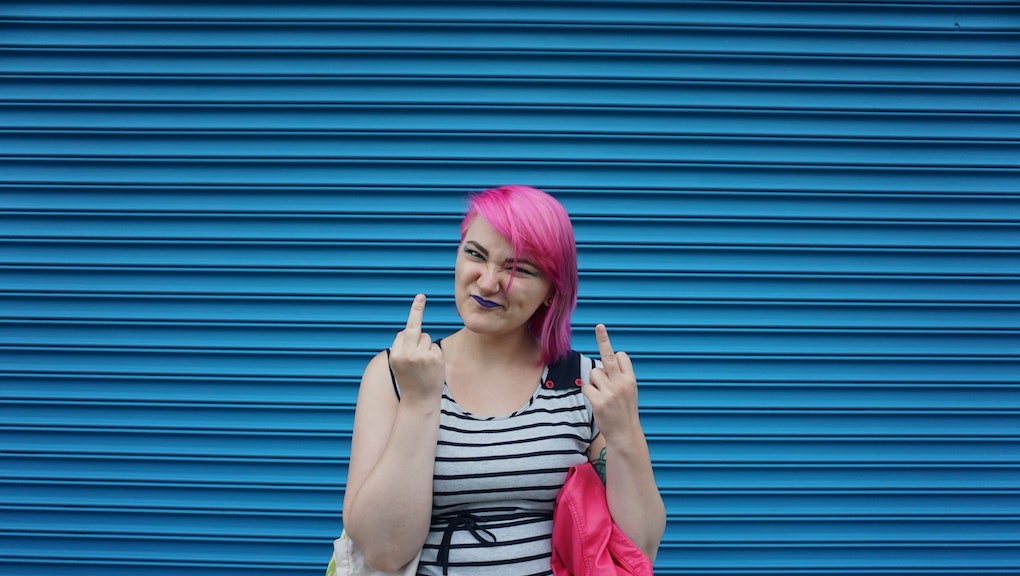 On Wednesday evening, at Holyrad Studio in Brooklyn, New York, scores of millennials with brightly colored hair, septum rings and thrifted outfits stood in line waiting to go inside. Some were there to enjoy the music and free beer inside, but most were in attendance for Fuck Rape Culture, a protest against the Stanford sexual assault case judge Aaron Persky.

Since news broke that Persky, a superior court judge in Santa Clara county, California, sentenced former Stanford University swimmer Brock Turner to a mere three months in jail for sexually assaulting an unconscious woman, there's been a growing push to have him removed from the bench. Persky has already been removed from his next scheduled sexual assault case, but a number of people want to see him off the bench permanently.

That's why the attendees at Fuck Rape Culture organized an event encouraging people to write letters to get Persky disbarred. In all, the event generated nearly 2,000 letters.

Sponsored by the group GRLCVLT, the event was the unexpected success of Remy Holwick, who initially planned to gather a group of friends to write complaints against Persky. Instead, Holwick decided to find an event space and provide letter-writing supplies to the public, assuming others would want to give the double bird to Persky and to rape culture. She was right.

"For a lot of us, direct action is all we can really afford," Holwick said in an interview with Mic. "I think that's what's so appealing about this. [Persky's ruling] involved a clear cut, black-and-white, nonpartisan case. You can't say this doesn't matter. Plus, going to a party is something people do on a Wednesday night anyway. Why not go to a party and feel like you're changing something?"

Mic spoke with several attendees at Fuck Rape Culture about why they decided to join the letter-writing campaign, why they want to see Persky removed from the bench and why they care about fighting to end sexual assault. Here's what they had to say.

"I'm here because I'm a survivor. This is the first time I've shared my story. I felt comfortable enough to actually express and vocally say [I'm a survivor] when this event came about. I didn't realize so many women have actually been affected by this. When it happens to you, you think you're the only person. ... It was a perfect opportunity to stand up for the times I wasn't able to stand up for myself. That's why I'm here. If I can help out just a tiny bit, as one extra voice, then there you go — we'll make a difference." — Jasmine, 31

"I really don't think [Persky] should be trying any more cases like this. I saw he was taken off his next sexual assault case, and I think it's awesome. I'm glad someone is already doing something besides this, and that they're taking action into their own hands. People are saying that it's not okay for him to try any of these cases. I heard about the case on social media, all over the press online. I don't know, it's just crazy — I think you see this stuff, especially with white males, all the time. Especially prestigious schools, you see people get off scot-free." — Hannah Tatro, 24

"I don't want a future generation to grow up thinking rape is what happens when you drink too much. It's not connected. I've been drunk many, many times, and I've been fortunate enough never to be raped. There shouldn't be a connection between drinking and rape; there should be a connection between nothing and rape. Rape just shouldn't happen, and it shouldn't be okay when it does happen." — Michelle Avedon, 25

"When something like [the Brock Turner case] happens, it's not about status or race or the fact that you're an alum or could possibly bring a gold medal to the school. It has nothing to do with money, it has to do with the fact that somebody has been robbed of their basic human rights — of their basic right to say how, when and where you use your body. It's awful. If the defendant were anonymous, would this same sentencing have happened? Does Judge Aaron Persky actually think six months is a real reasonable amount of time for someone to learn their lesson for raping someone? Brock Turner is not being held responsible for his actions." — Maxine Cher, 25

"I'm here because a lot of women in my family have had to deal with [the consequences of] rape culture. The fact that it's caused my mother, for example, to never feel comfortable wearing dresses is really fucked up. It's fucked up that men make her feel uncomfortable when she's wearing stuff like that. Even on the walk here, there was a bunch of guys harassing people — on the walk here! I think it's ridiculous nobody would stop them." — Ty, 23

"I'm here because I'm hopeful. Sexual assault has been kind of a commonplace thing in my family. Events like this show us that we're not alone, and that we actually have allies in many causes. I came here to show that I'm an ally, and I won't stand for [rape culture] the same way that I hope generations of me don't stand for it either." — Danielle Covington, 24

"Fuck Rape Culture was inspired by a particularly terrible decision in the courts, however it's a problem that's been pervasive and persistent forever. This case has inspired a lot of people, and I think the leniency of Judge Persky is an injustice to our society. It maintains fear in everybody, and questioning victims and supporting rapists. Sexual assault is obviously a problem. Rape is rape, no matter where it is — whether it's on a college campus, whether alcohol is involved, whether you're an athlete. No matter what. It's wrong, and the punishment should fit the crime a lot more than 90 days." — Taylor Maggard, 30

"I am a rape survivor. I am also a survivor of abuse. It took me a really long time to share my story. When [the Brock Turner story] came out, it hit home really hard, and I said fuck this. I'm not being quiet anymore. I decided to share my story and be vocal about it." — Alex Graves, 25