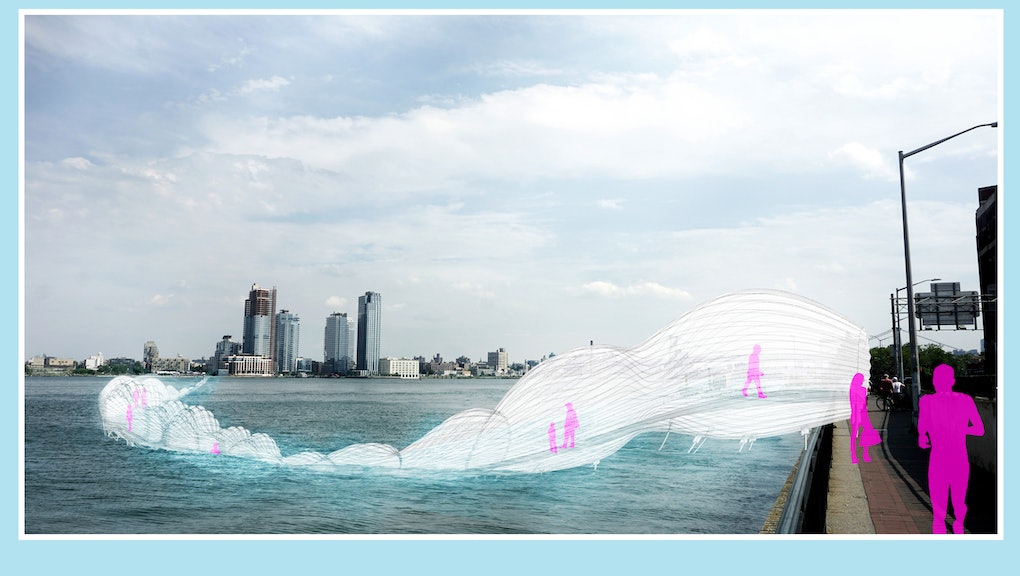 As doomsday for those living along New York City's L-train line (the line connecting North Brooklyn to Manhattan) nears, a light at the end of the tunnel has emerged. Literally.

Light at the End of the Tunnel is actually the name of a proposed solution to the three-year closure of the L train — a tunnel that floats on the East River.

It's rad. Van Alen Institute held a competition that invited teams to propose solutions to the L-train shutdown, and one team was like, fuck that noise, we're just going to make like Jesus and walk over the East River.

The transporter tunnel — dubbed the Light Transporter — would use NASA tech, according to the proposal, to create a 2,400-foot translucent passage with "digitally enhanced environments" (holograms of dirty subway cars for those who don't like change?) that would either be completely underwater or floating and partially submerged. The proposal adds that on the ground, commuters could take a "fast cart people-mover commuter system" along 14th street in Manhattan to North 7th Street in Brooklyn, which would connect them to L Transporter entrances along the river.

The team doesn't see this as a permanent solution (although walking or biking along a beautiful river sounds far more appealing than stuffing your body into a busy subway car) but rather as a temporary solution while the L line is spiffed up. According to the proposal, sections of the system could be manufactured offsite within six months to then be quickly assembled onsite.

If you're having trouble picturing what this massive see-through tunnel might look like, as Gonzalo Cruz, one of the designers, told DNAInfo, you can just "imagine a giant condom."

So it's not that different from a subway car after all!