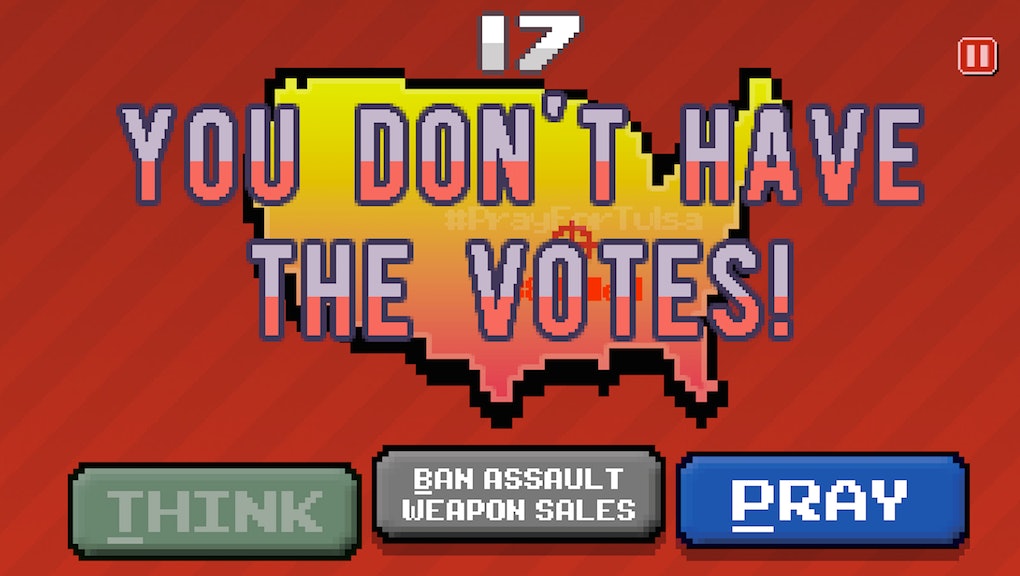 Gun violence is an epidemic that has systematically threatened our schools, our cinemas, our nightclubs and our military bases.

But instead of enacting policy changes in the wake of terror, many politicians only provide "thoughts and prayers" to families who had their loved ones lives'  stolen from them.

The innovative team at Everyday Arcade decided to create a game to prove just how useful thoughts and prayers are.

Thoughts and Prayers: The Game shows the very real impact — or complete lack thereof — lawmakers' thoughts and prayers have on effecting genuine change in the United States.

"America faces an epidemic of mass shootings," the game begins. "It's up to you to stop them...With the power of your thoughts and prayers."

When you try to click on the tab "ban assault weapon sales," different signs appear in bold, declaring, "That's un-American!" "You rely on NRA donations!" "You don't have the votes!" and "Weak!"

When you're slow to offer enough of your thoughts, the game implores you to "EMPATHIZE!!"

Meanwhile, reports of fictional mass shootings pop up on a map with their respective death tolls and #PrayFor hashtags.

How do you win? You can't. That's the point.

In order for massacres — like the Sunday's mass shooting at a gay nightclub in Orlando, Florida — to stop happening, it's obvious we'll need lawmakers to do something more than offer "thoughts and prayers."

And it shouldn't take a video game to figure that out.