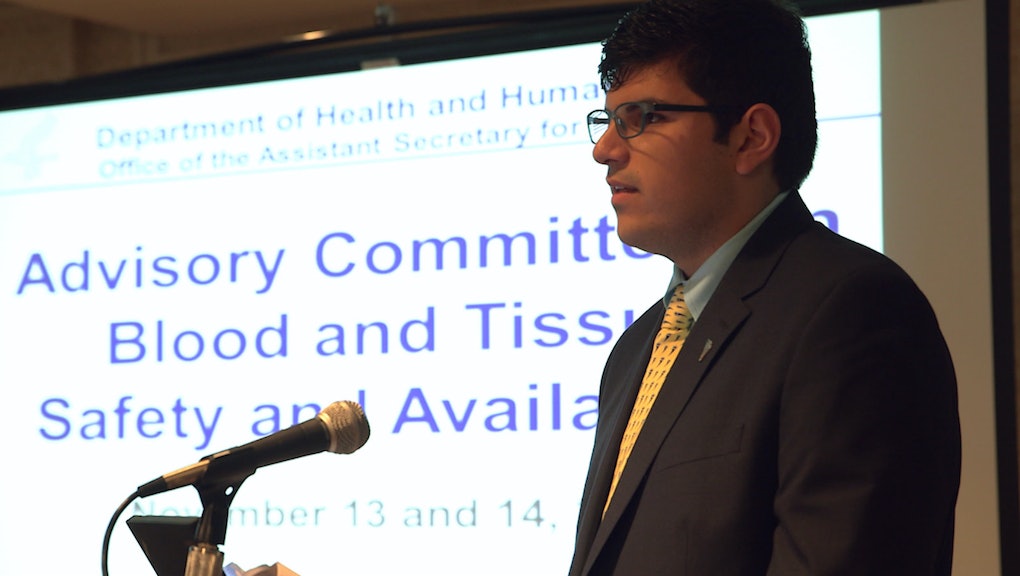 College senior and 21-year-old Jay Franzone is choosing not to have sex for one year to prove that the FDA's de facto ban on gay men donating blood is discriminatory, BuzzFeed reported.

"Some people want to go skydiving or see Roman ruins before they die," Franzone said in an email. "I want to give blood."

The gay blood ban returned to the national spotlight this week after the tragic shooting at Pulse nightclub in Orlando, Florida. After the shooting, gay men hoping to donate blood and help their community were unable to do so.

"The attacks in Orlando only magnify my choice to be able to give blood and highlight this outdated, discriminatory policy," Franzone told Mic.

Though Franzone is gay, the blood ban has also affected his own loved ones.

"Family and friends have needed blood and their life would be cut much shorter without it, for that reason alone it's why I really want to give blood," Franzone said.

This week, the Daily Beast reported that some members of Congress don't even know about the blood ban that disallowed Franzone from helping his family.

Franzone told BuzzFeed that while being abstinent won't change the FDA policy, he hopes it will add to the conversation.

Franzone said that when he turned 21 in April, even though his boyfriend brought him out for a birthday dinner, they did not engage in sex.

"We got home, and, well, most people on their birthday are gonna have sex — that's a pretty common thing in my age bracket," Franzone said. "The hardest part about being abstinent for a year is laying to next to my boyfriend and being like, 'Night, babe,' and just going to sleep."