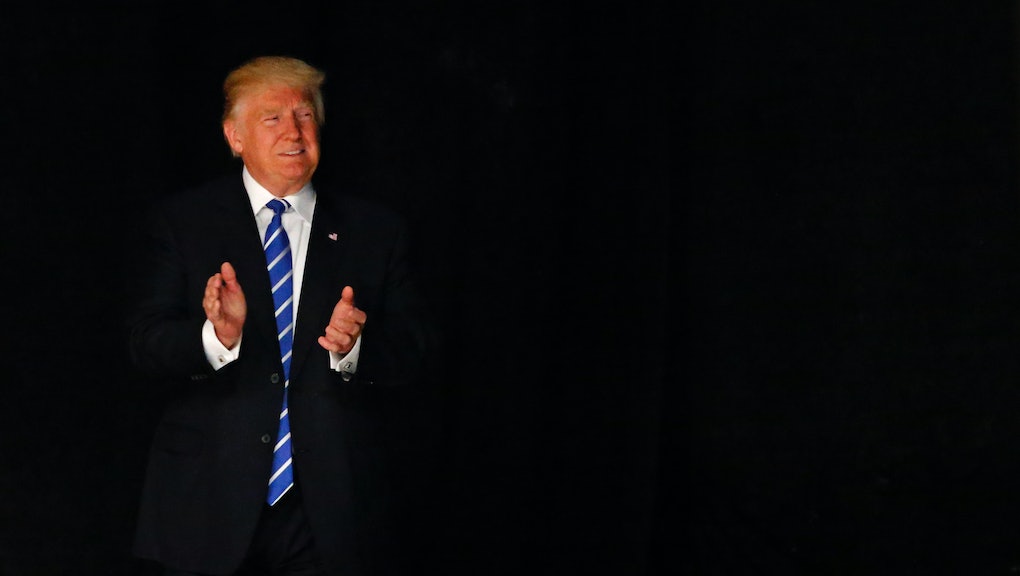 In the days following a mass shooting which killed at least 50 people, including the gunman, at a gay nightclub in Orlando, Florida, presumptive Republican presidential nominee Donald Trump has attempted to get the LGBTQ community in his corner by suggesting his Democratic rival Hillary Clinton can't protect them against Islamic extremists.

Clinton "can never claim to be a friend of the gay community as long as she continues to support immigration policies that bring Islamic extremists into our country and who suppress women, gays and anyone else who doesn't share their views or values," Trump said at a rally on Monday.

But that didn't stop him from courting the favor of Pastor Robert Jeffress of Dallas, Texas, an anti-gay, religious-right leader who the candidate welcomed onstage at a rally in the city on Thursday.

Jeffress posted a photo of the meeting of minds to his main account on Thursday night, and it subsequently got retweeted to Trump's millions of Twitter followers the next day.

It's not the first time Trump and Jeffress have teamed up on the campaign trail, but the embrace of the pastor suggests Trump is more concerned with consolidating his support among Evangelical voters than convincing LGBTQ people he will be a reliable ally.

In 2014, Jeffress told radio host Alan Colmes gay marriage devalued the "real thing," saying "if marriage is whatever you define it to be, why bother to get married at all? Anytime you counterfeit something, you cheapen the value of the real thing."

As the Advocate notes, Jeffress has a long public record of statements bashing homosexuality as a "perversion" comparable to "bestiality, uh, incest or pedophilia." In a 2012 sermon, Jeffress warned his congregation "homosexual marriage" and other liberal social ideas might cause the almighty to smite the U.S., adding "there is absolutely no amount of armaments we could require to protect ourselves against the judgment of almighty God." In 2015, the Christian Post reported Jeffress claimed protecting LGBTQ people against discrimination by Christian business owners could "pave the way for that future world dictator, the Antichrist, to persecute and martyr Christians without any repercussions whatsoever."

As the Dallas Observer recounted last month, it's hardly the only subject on which Jeffress has strong opinions — including on the Supreme Court decision which legalized gay marriage nationwide, which he thinks is the worst SCOTUS decision in history.

The same day at the Dallas rally, Trump told his supporters "LGBT is starting to like Donald Trump very much lately," an apparent reference to the events of the past week.

That's certainly debatable. According to NBC News, a "Gallup poll conducted from June 1 to 16 found that 78 percent of Americans who identified as LGBT had an unfavorable opinion of Trump, versus 14 percent who had a favorable view."