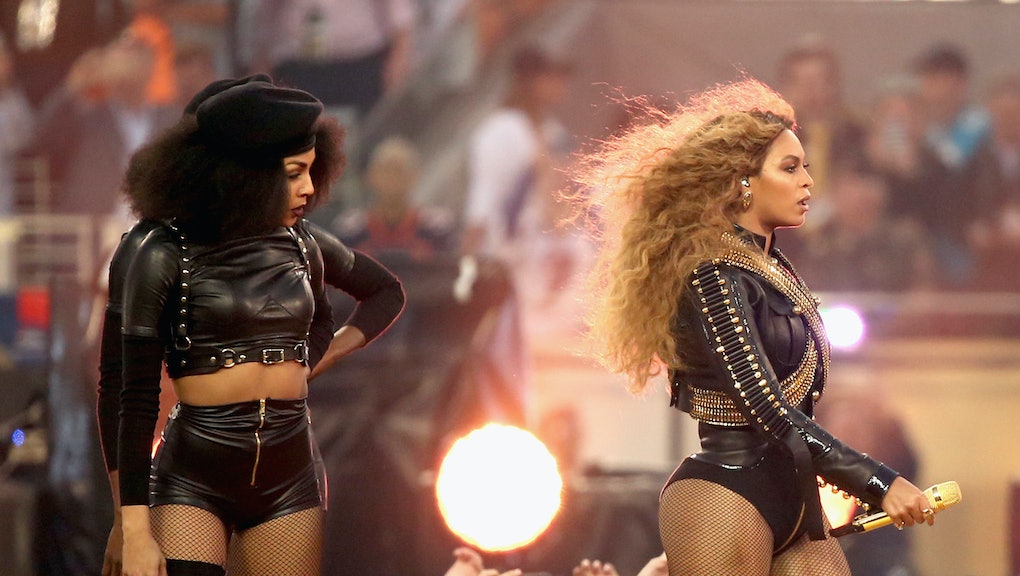 The History of the Beret: How a Peasant's Hat Turned into a Political Statement

Think "beret" and an image of a cool-looking French woman who looks like Brigitte Bardot might pop into your head. She's smoking a cigarette and/or eating a baguette. It's raining, and she's wearing a black beret to shield her blonde locks from the slow drizzle.

Think "beret" and an image of guerrilla leader Che Guevara looking sullen while wearing a black beret with a silver star on the front might pop into your head.

Think "beret" and an image of a Black Panther member, their fist high in the air, might pop into your head. Or, similarly, an image of Beyoncé during her Super Bowl halftime show, for which she dressed up her background dancers as Panthers.

Needless to say, the beret has been around for a while, and has been linked with a plethora of different types of peoples, countries and identities. It's a hat with a powerful, unlikely history.

The ancient era: The first berets were just a cheap thrill.

The silhouette of the beret we know of today — a disk of wool that snuggly hugs the wearer's head — has been around for thousands of years. According to Dis Magazine, archaeologists found traces of hats similar to the beret inside Bronze Age (3200-600 B.C.) tombs in Italy and Denmark, as well as depicted in sculptures and paintings across Western Europe. In ancient Greece and Rome, historians say people primarily wore two kinds of hats — the petasos, which was a floppy sun hat, and the pileos, which was conical — and those two, together over time, evolved into a flat, floppy hat made of wool.

Although the shape and size of this hat varied as it popped up in other parts of Europe between 400 B.C. and the 13th century, there was one mainstay of this flat, floppy hat: They were all made of felt. Felt was (and still is) cheap and easy to make, needing just wool and water and pressure, so for hundreds of years, farmers and pastors would find globs of melded, wet wool and craft tufts to fill their shoes for weather protection on long walks. After realizing how weather-proof it was, it was seen as an optimal textile for weather protection, eventually making its way from being stuffed in shoes to being crafted into jackets, scarves and then, finally, hats.

Blame it on how cheap felt was to manufacture, but by the 14th and 15th centuries, berets (which were not yet known as berets, but simply felt hats) had effectively permeated Europe's farming and artist classes (read: the poorest classes).

Where you now see it most, in varying silhouettes, is from art from this era, worn by artists like Rembrandt in self-portraits and seen in artwork from Johannes Vermeer and Europe's low countries depicting peasant life. It was one of the most utilitarian items a person who would be working outside (as many landscape artists did) could wear, so they did. Simple as that.

But then, the 1800s happened. The beret as a political statement first appeared in Spain during the Second Carlist War when Tomas Zumalacarregui, a leader of the Carlists appeared wearing a red beret, beginning a long line of revolutionaries and militarized persons donning the flat hat.

The word "beret," which is originally French in origin, was first documented in 1835. It originates from the Latin word "birretum," and the term "bearnais berret" refers to a flat, woolen cap worn by local peasants, according to House Appeal. During this time over in France, as opposed to in Spain, the blue beret became a symbol for mountain warfare, with the French Chasseurs Alpins, who would wear light blue berets to signify their status as elite members of the French Army.

Meanwhile, the black beret still remained a symbol of peasant status in most of Europe.

The early 1900s: At last, the black beret becomes a fashion statement for women.

There's no one answer for why a hat associated mostly with the peasant class became a fashion statement. There is only just this: The black beret looks chic as hell. And at the turn of the century in France, this was realized at last, with both men and women turning the hat into a metropolitan staple.

In the streets of Paris through the 1920s on, artists and poets and writers and singers and movie stars, from Ernest Hemingway and French singer Edith Piaf to French actress Arletty and Lauren Bacall, were seen wearing the felt cap, which signaled a type of bohemian chicness to passersby.

And maybe it was that universal appeal, which spread from country to country in Europe and then to America that made the military take notice. Or, maybe it was their cheapness and how easily they could be mass manufactured. In any case, the hat that could be utilitarian in its construction and stylish in its versatility started to become a military staple in this era.

Previously, Britain's Royal Tank Corps had adopted black berets during World War I, both for their utility and their ability to hide oil stains. So, by the 1950s, the beret as a military garment had already started to spread, with the U.S. Army's Special Forces adopting green berets, which was a fashion statement so remarkable that the group of men was soon known as "the Green Berets."

From then on, berets would only spread further to different military branches and groups throughout the world, from China and Sri Lanka to Canada and Ukraine.

The 1960s: The beret becomes the political revolutionary's favorite headpiece.

With a renewed interest in new wave French film in the 1960s came the revival of the beret as a fashion item. But don't think that's all it was known for in this era.

Sure, movie stars like Brigitte Bardot and Catherine Deneuve were seen wearing little black caps on red carpets and to the Cannes Film Festival, as were men like Pablo Picasso and Dizzy Gillespie, but the beret also had a larger significance politically at this time.

It was a signature of men like Che Guevara and Fidel Castro, two of Cuba's most influential political revolutionaries. Castro, who was a leader of the Communist Party and would become Cuba's prime minister, and Guevara, a Marxist leader and guerrilla politician, both wore black berets as they gave speeches and rallied for supporters to rise against the Batista government in Cuba.

The 1970s: The beret becomes a revolutionary symbol.

Although Guevara died in 1967, political leaders' interest in the beret didn't die quite yet. The 1970s (and the late 1960s, for that matter) saw the beret being worn by activist groups across the world, including, most famously, members of the Black Panther Party. Its members were known to wear lots of black leather, a powder blue shirt, black shoes and their hair in its natural state with a black beret, which was a wink to the green berets worn by soldiers. As High Snobiety wrote, the look "further [symbolized] their position as soldiers on the frontline. Yes, there were functional and political reasons for the way the Panthers dressed, but style was also part of the equation."

Like the many activist groups formed after their creation in 1966, they had a uniform, and that uniform had meaning. According to a PBS documentary titled The Black Panthers: Vanguard of the Revolution, the look was, above all else, about celebrating their own blackness. "All of us were born with our hair like this and we just wear it like this," a Black Panther member says in the doc. "The reason for it you might say is that it's like a new awareness among black people that their own natural physical appearance is beautiful."

Other than the Black Panthers, there was a group called the Brown Berets, a Chicano organization formed in 1967 that called for all lands once occupied by Mexico to return to Mexico, that wore brown berets, naturally. There was the Young Lords Party, which was a Latino revolutionary organization based in the United States that formed in the late '60s, and they wore black berets. And there was the Guardian Angels, which were formed in the 1970s as an anti-crime citizen patrol, which wore red berets.

In this era, if you wanted to stand for something, the beret was how you did it.

1990s: The beret collides with fashion — and political controversy.

After the Black Panthers made the black beret all their own, who would have thought that it'd find itself on Monica Lewinsky's head in an iconic photograph of the young intern meeting then-President Bill Clinton? The world sure is a strange place.

Along with that blue dress, the black beret became something of a signature for Lewinsky. "It's time to burn the beret and bury the blue dress" in an effort to put her affair with Clinton behind her, she said to Vanity Fair in 2014.

While for a short time during the decade, the black beret was signifier for Lewinsky, it also found its way back to fashion runways. Whether it was an ode to Lewinsky or not, the black beret was seen on high fashion runways in Paris, with a number of models in Thierry Mugler's show donning them with slinky red carpet dresses. As with many decades before this, the beret could live on the line between political statement and fashion statement.

2010s: The past is present and the political is fashionable.

And now in the 2010s, those two worlds can collide. Now, the political (past and present) is fashionable. See: Beyoncé's ode to the Black Panthers during the Super Bowl halftime performance in February with black berets or the use of black berets in Chanel's Resort 2017 runway show, which was hosted in Havana, Cuba. Given the location, it very well could have signified a nod to the country's former leader.

We are now in a decade where the political beret and the fashionable beret can live harmoniously, with performers and designers alike looking to the past for a few revolutionary fashion statements.

After thousands of years of existence, the beret has taken on a number of meanings. At first, it was meant to symbolize a peasant's status, and then an artist. In the 19th century, it had the power to symbolize a political belief. In the 20th century, it could be a fashion statement and a hint to one's ideology. By the 1970s, it could be a signal of black pride and by now, the 2010s, it can symbolize pretty much anything, from a political stance to just wanting to innocently wear a beret.

For a hat, it certainly has a lot of power.