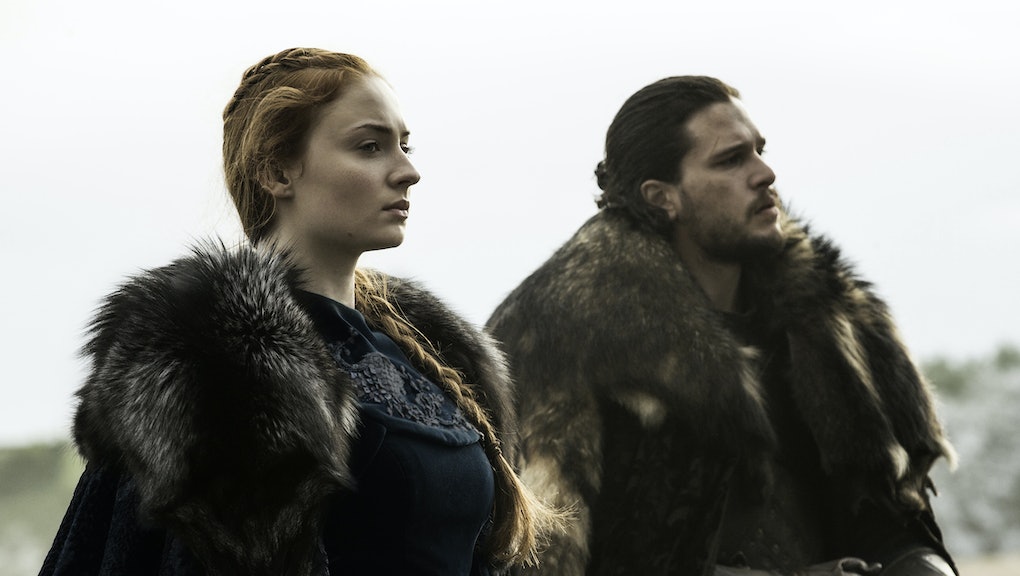 In "Battle of the Bastards," Game of Thrones staged what many of its fans believe to be one of the series' most epic, breathtaking battle sequences. As expected, viewers were treated to an inevitable clash between the titular bastards: Jon Snow and Ramsay Bolton. However, while Ramsay's forces dominated much of the battle, Jon's forces ultimately emerged victorious with some ninth-inning assistance from Littlefinger and the Knights of the Vale (Game of Thrones' own "the eagles are coming" moment).

From a narrative standpoint, it was unsurprising to see Jon Snow and House Stark prevail — what was unexpected was how they did it. While the name of the episode implies Jon and Ramsay taking center stage, the real winner of the "Battle of the Bastards" wasn't Jon Snow — and it definitely wasn't Ramsay Bolton.

It was Sansa Stark.

The evening before the showdown with the Boltons, Sansa warns Jon that he's making a mistake by assuming he knows enough about Ramsay from one interaction to understand how his forces will fight. Sansa has been at the brunt of Ramsay's physical and mental torture for a lot longer, and assures Jon that he has something up his sleeve — and it probably involves the murder of their little brother, Rickon Stark.

It's grim to consign Rickon's violent death before it even happens, but Sansa's prediction is proven spot-on when Ramsay brings Rickon to the battlefield. He tells him to run across the field to Jon's side, all while aiming arrows in his direction. He waits to deliver the fatal arrow to Rickon until he's close enough to Jon that he's not just painstakingly close to rescuing his brother, but also within striking distance of Bolton arrows.

This causes the Stark forces to ride to Jon's aid, and in turn, ruins their plan of letting the Boltons come to them (Jon, ironically, says he was baiting Ramsay to fight him one-on-one the day before just so they'd expect him to charge). The battle — chaotic as it is from this point on — is heavily in favor of the Boltons, who have more soldiers and horses.

And that's the exact moment when Sansa Stark wins this one for her family.

The overwhelming odds against Jon almost literally crush him underneath a sea of bodies. It's Sansa's trump card in writing to Littlefinger and the Knights of the Vale that ultimately save Jon's life. Sansa's move demonstrates how adept she has become at playing the game in Game of Thrones — Littlefinger taught her much of that — and also her skill at making the cool, calculated decisions that are necessary. Jon's method, particularly running to rescue Rickon, was a move expected from a Stark: A house with unquestioned honor.

It's through this type of deception they've felt their greatest losses — namely, the Red Wedding and Ned Stark's execution. Here, Sansa's gambit helps her house emerge victorious. Her willingness to diverge from the Stark way by writing a letter to a man she despises behind her brother's back was the only way the Starks would survive.

Ultimately, too, it's more important to diverge from the Stark way to defeat someone as sadistic and cruel as Ramsay — perhaps the worst villain in modern television. Poetically, Sansa gives him an ending fit for his inhumane practices: Eaten to death by his prized hounds he kept starving for a week before the fight.

Now, the question remains how Sansa will behave post-battle, and whether she's more deceptive like Littlefinger, or more willing to open up and be honest with Jon.

It's clear from the "Battle of the Bastards" that Sansa's character arc has changed dramatically in the span of a season. Last year, fans were lamenting her controversial fate as Ramsay's unwilling bride. On Twitter, fans now praise Sansa's ferocity and vengeance in the same light as Beyoncé — the highest compliment of all.