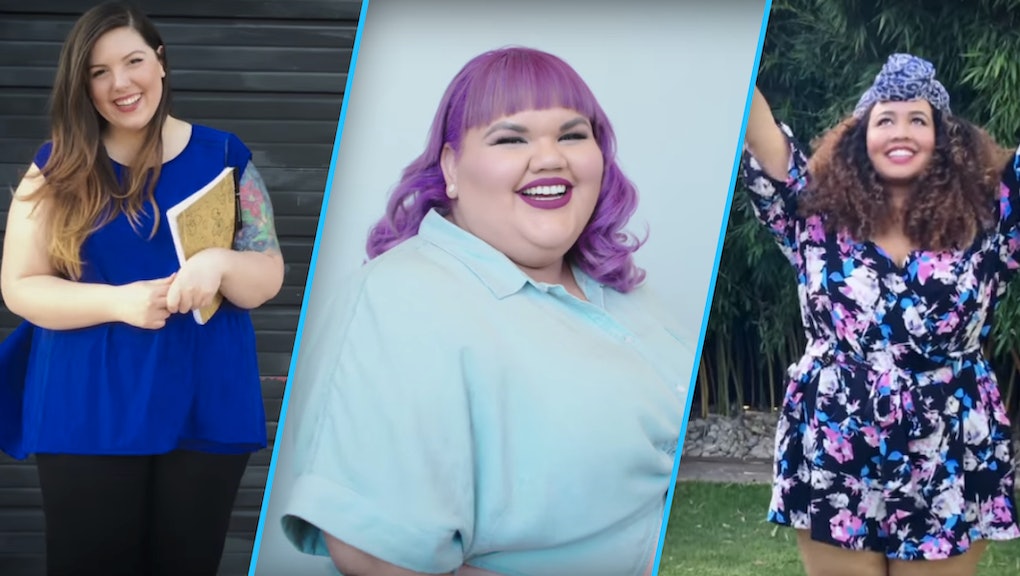 In the first few seconds of JCPenney's new #HereIAm campaign, Jes Baker, the author of Things No One Will Tell Fat Girls, stares into the camera and asks, "Would my life be better if I were thinner?"

After a quick second, she responds: "No. But it would be better if I wasn't treated so poorly because I'm not."

And with that, JCPenney's #HereIAm campaign, which is meant to celebrate its new boutique for plus-size clothing, is doing what few plus-size ad campaigns have done before it: Letting plus-size women tell their stories, before getting all about the clothes.

"There is true beauty in individuality," JCPenney wrote in the caption of the video. "So, when we start letting go of preconceived notions of who someone is based on what they look like on the outside, we all take one step closer to body positivity."

In the three-minute video, viewers are introduced to not just Baker, but the Grammy-nominated singer and songwriter Mary Lambert, who tells her own story about how society treated her as a child, when she wasn't stick-thin.

"I remember when I was 10, I wanted to be a singer and I remember a family member telling me, 'Sorry, kid. It's not going to happen for you.'"

Baker then chimes in and talks about her own experience growing up, saying, "As the fifth grader called 'hippo,' that was a very scary thing for me and something that I was spending my entire life trying to change."

Then, we meet GabiFresh, a plus-size blogger and designer who's created hugely popular lines for both Target and swimsuitsforall. "In high school, I was one of those girls that was like, 'I would be so much prettier if I were thin.' If I could just reach that one last level, my life would be perfect."

After her is Ashley Nell Tipton, the winner of Project Runway season 14 and a designer who's teamed up with JCPenney before for her own plus-size line. "I was a target for people to make fun of or bash," she says. "I didn't know what was wrong with me, like why was I so different?"

And finally, there is, Valerie Sagun, who is a proudly curvy yogi and blogger, with more than 136,000 followers on Instagram. "There was the stereotype of yoga where you have to be the skinny, perfect body, bleach blonde kind of woman," she says. "I definitely am not that."

Their collective stories are deeply personal retellings of how society ostracized them from the beginning. However, they didn't let that stop them. Not one bit. All of the women featured have succeeded in their crafts, from getting nominated for a Grammy to collaborating with major retailers.

So with the last minute of the video left, the women turn it into a testament of the power of self-love. As Baker says, "We're countering a lifetime of learned hatred." As Tipton says, "The only person who should be defining me is me."

The women then show off some of what they do best: Whether that's songwriting or rock climbing, while also outlining exactly what fat girls can do. And as Baker says, ultimately, "Fat girls can do whatever they want."

"Fat girls can have amazing jobs," Fresh chimes in. "We can walk runways. We can be on the cover of magazines."

The ad also does its part to demolish some of the rules and preconceptions that are slapped on plus size women in the world. For example, Baker says she loves her bikini, and Tipton is adamant that they're not trying to hide, and they are sexy.

"The bodies don't need to change," Lambert says. "The attitude does."

So, with that, JCPenney joins just a handful of retailers that have gotten this whole plus size thing right, including Selfridges, which released a similar ad for its loungewear department that focused on the models' individual stories to tell the real story: Society judges women's bodies to a ridiculous degree.

Rather than letting a bunch of professional copywriters create scripts for these women, both Selfridges and JCPenney allowed them to tell their own stories, and therefore make a powerful message about how society treats women of different shapes and sizes. These women have the power to change their own narratives and challenge the many misconceptions society has already created, so why not let them tell you that?

As Sagun says at the end of the video: "It's really up to us to change the narrative and to share photos of ourselves, follow each other and show each other that this is what women look like."

You can watch the entire #HereIAm ad campaign below: