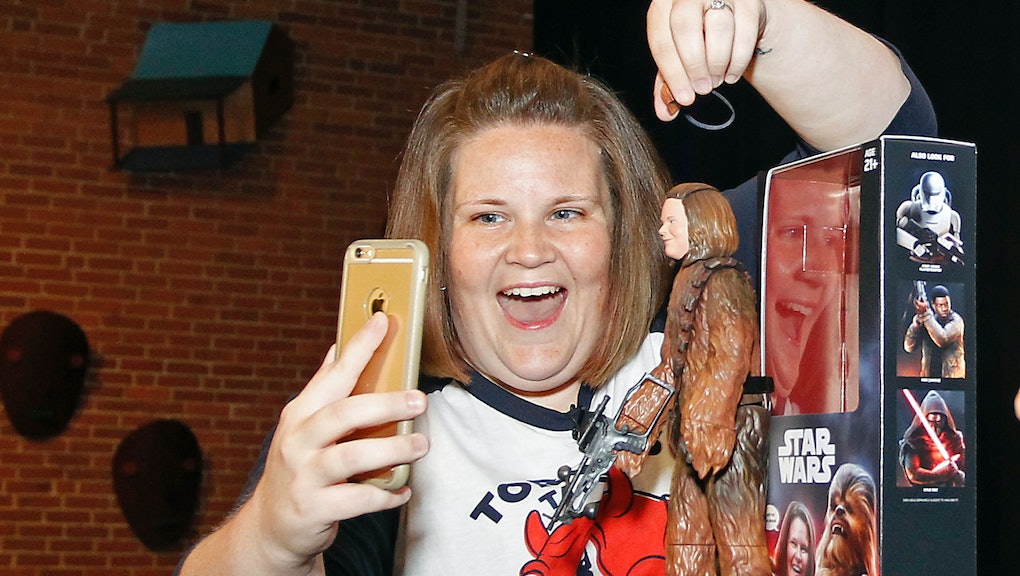 Things just keep getting better for "Chewbacca mom," aka Candace Payne, the Texas mom whose four-minute Facebook Live video about a plastic Chewbacca mask, filmed in a Kohl's parking lot, became the most popular Facebook Live broadcast to date.

Estimations say she's already racked-up over $420,000 in freebies since going viral, including college scholarships for Payne and her entire family, a television appearance with Star Wars director J.J. Abrams and a visit to Facebook headquarters to meet with Mark Zuckerberg. Now she can add her very own custom action figure to the list.

That's right — not only did Payne and her family get a visit to Hasbro this week, the toy company's CEO, Brian Goldner, also presented her with a one-of-a-kind custom action figure featuring her face on a Wookie body, reported Entertainment Weekly. The action figure recites 13 of Payne's "catchphrases," including, "That's not me making that noise, it's the mask," and, "I am such a happy Chewbacca." Of course, it comes with a removable Chewbacca mask.

Payne's entire story is proof that, if you are pure of heart on the internet, you will be showered with riches and rewards. Now get out there and go viral, kids.