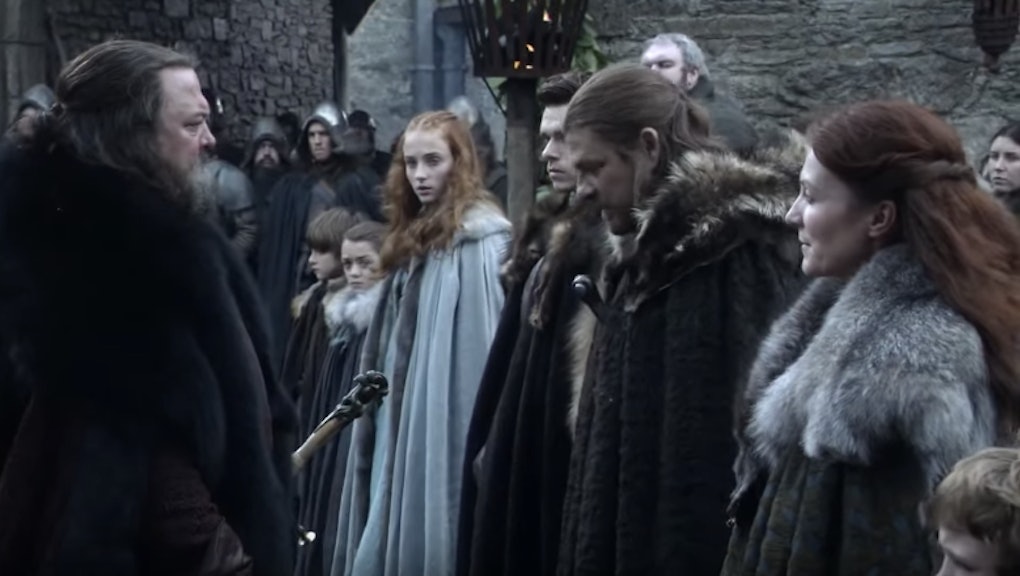 "Robert's Curse": 'Game of Thrones' Easter Egg May Reveal the Next Major Character to Die

(Editor's note: Spoilers ahead for Game of Thrones.)

If you're caught up on Game of Thrones, Westeros in season one is nearly unrecognizable. The White Walkers were still considered a myth, not a threat; Daenerys Targaryen was without her dragons or her army; and the Stark family was together, happy and alive in Winterfell.

Cut to season six, and many of the Starks — patriarch Ned, wife Catelyn, eldest son Robb and now young Rickon — have met their fate.

As one savvy-eyed redditor pointed out after last night's "Battle of the Bastards" aired, all the deceased Starks have an odd thing in common: Robert Baratheon touched them.

Writing on the subreddit /r/GameOfThrones, NANAs_Mic references "Robert's Curse" — a scene in season one, episode one, in which the king arrives at Winterfell and greets the Stark family. Everyone touched by the king eventually meets his or her gruesome fate on Game of Thrones. As the user notes, Rickon was the final piece in Robert's unfortunate curse.

So Robert's curse is now over — at least for the Starks (thank god he didn't give Arya a fist-bump). However, the curse could still doom the fate of another character who interacted with the king plenty: Robert's widow, Cersei Lannister. She was known to have avoided Robert's touch in general — we know their children aren't really his — but a pivotal scene in season one shows Robert slap Cersei after she insults him.

If the curse also rings true for Cersei, we should expect her impending death — and that could well happen either way. Though she is currently facing trial for her crimes by the High Sparrow, there have been heavy hints suggesting that Cersei will use wildfire to escape punishment, potentially destroying King's Landing and killing her son, King Tommen, in the process.

Whether that includes herself — or, as some have theorized, her brother Jaime Lannister killing her in a rage over Tommen's death — remains to be seen, but it appears Robert's curse looms over at least one more major character.