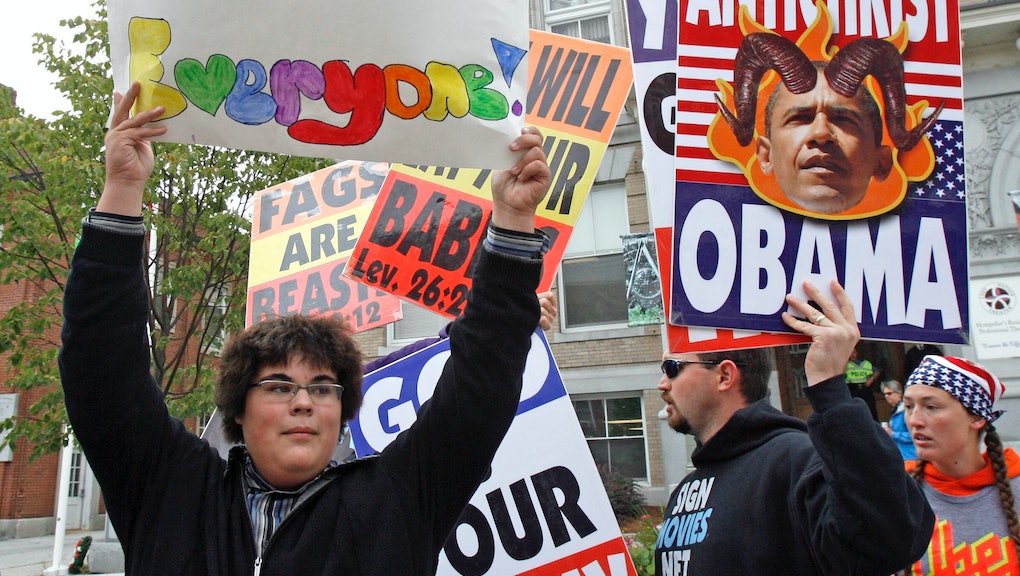 On Saturday, a group of men and women with the Orlando Shakespeare Theatre lined up together while dressed in all-white linen and makeshift wings by their sides. They were shielding mourners from anti-gay rhetoric of the Westboro Baptist Church, who were picketing the funeral of Orlando, Florida, shooting victim Christopher Leinonen.

But this wasn't the first time angels appeared to protect mourners from the Westboro Baptist Church members. In fact, these angels appeared nearly 20 years ago at another watershed moment in American LGBTQ history: Matthew Shepard's funeral.

On the night of Oct. 6, 1998, Shepard — a University of Wyoming student — was brutally beaten and tortured by two college-aged men who were reportedly motivated by homophobic sentiment. Aaron McKinney and Russell Henderson, offered to give Shepard a ride home from bar in Laramie, Wyoming. Instead, McKinney and Henderson drove Shepard to a remote area where they robbed him, then beat him until they fractured his skull.

Led by Fred Phelps, the Westboro Baptist Church picketed Shepard's funeral on Oct. 16 with anti-gay slogans. Disgusted by the sight of such hatred, Shepard's friend Romaine Patterson created Angel Action. Donning themselves with white linen robes and wings, the angels blocked the sight of the homophobic protesters from mourners at Shepard's funeral.

In an 1998 interview with CNN, Patterson said she couldn't just sit and watch anti-gay slurs hurled at the funeral procession of her beloved friend. She felt like she had to do something.

"I could no longer sit idly by and watch others bring forth messages that were nothing more than vindictive and hate-filled," said then 21-year-old Patterson. "As a young person, I feel it is necessary to show the great nation that we live in that there doesn't need to be this kind of violence and hatred in our world."