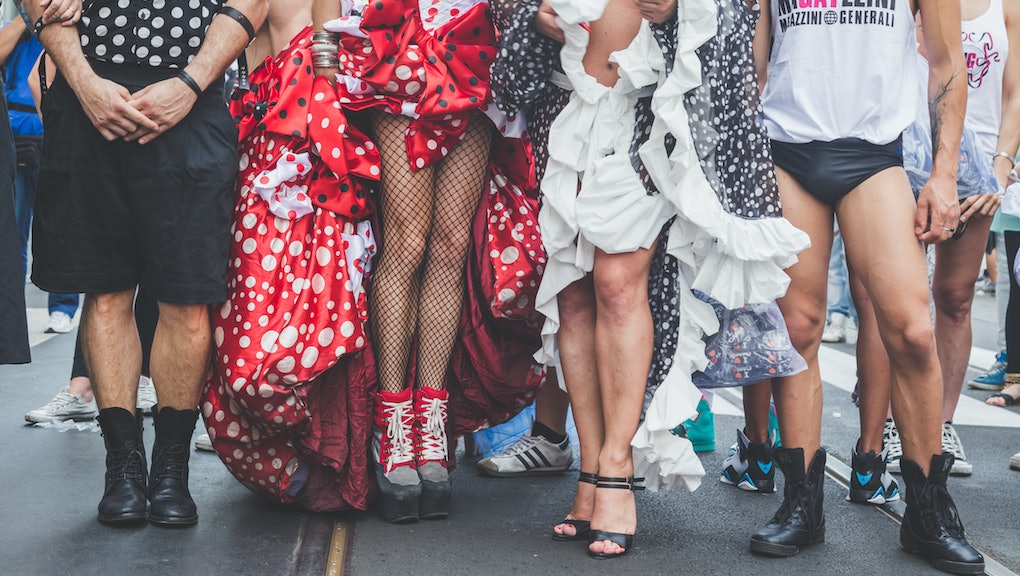 In the Wake of Orlando Shooting, NYC’s 2016 Pride Will Go on — But With New Vigilance

NEW YORK — It's Friday night at Industry Bar, a modern, chic Manhattan club that caters to a mostly LGBTQ crowd. Men and women gather on the dance floor with drinks in hand as others order rounds at the bar. Groups of people circle up around dimly lit tables for photographs. Some patrons are here to link up with long-time friends; others recede to more private corners where they can talk, flirt and kiss.

As NYC Pride Week commences, the ambiance in Industry and other LGBTQ clubs is overwhelmingly positive. Patrons still very much describe the club as a safe haven for the community, though many note there is a new sense of vigilance in the air. In the aftermath of the deadly mass shooting at Pulse nightclub in Orlando, Florida, those who had been to places like Industry since the attack said they were far more aware of their surroundings — and their vulnerability.

"I felt this anxiety coming out of the subway last night — the first night I went out since the shootings," said Seth Silberman, a former LGBT studies professor at Yale University who was also a DJ at a handful of NYC gay clubs, in a phone call. "I can't even really tell you if there's a back entrance at Industry, a club I've been to a thousand times. That's never a question I've asked before, and that'll be something I ask every space this year."

The mass killing of 49 people at Pulse's Latin night will have lasting effects on how the LGBTQ community thinks about its safe spaces. Such spaces — ones that used to feel impenetrable — now feel vulnerable. The Orlando attack was also a sobering reminder that anti-gay sentiments run deep and, at their extremes, can be deadly.

A community on high alert

Ingrained in New York City's LGBTQ community is a new sense of self awareness. LGBTQ folks now feel that on the doors of their clubs, lounges and restaurants is a red target — similar to the ones that marked the entrance to Sandy Hook elementary school, a Century 16 movie theater in Aurora, Colorado, the Fort Hood military base in Texas, Virginia Tech's University, the Red Lake Indian reservation in Minnesota, and a Sikh temple in Wisconsin. The list goes on and on.

That's not to say the shooting has tempered people's desire to celebrate Pride Week. Many have said they've decided the attack won't force them into the shadows, but it certainly would lead them to celebrating smarter.

Geena Russo, an LGBTQ activist and editor, admits to being on high alert after what happened June 12, sometimes silently strategizing exit plans when out with friends. The 23-year-old has even taken two active-shooter training courses, although those were completed before the Pulse shooting. "They show videos of a real-life simulation, and at the end of the training they do walk you through a real-life situation that's pretty intense," Russo said in a phone call.

Russo doesn't know if the active-shooter courses would be truly resourceful during an event like Orlando, though "they do instill a sense of calmness throughout the situation ... They teach you how to hopefully get through it."

For the time being, Russo has vowed not to become intoxicated in public spaces. "But I don't want to just stay home. I should be allowed to celebrate," Russo said. "Who I am is a celebration."

"I don't want to just stay home. I should be allowed to celebrate. Who I am is a celebration."

Pride will go on

With the annual NYC Pride March days away, there's a complicated mixture of emotions across the city: This time last year, Manhattan was awash in rainbow colors following the Supreme Court having deemed marriage equality the law of the land. This year, those same flags drape doorways and windows across the city as the LGBTQ mourns losses in their community.

On June 13, at the Stonewall Inn, a historic landmark for the gay rights movement and a favorite dive bar for locals, a candlelit vigil for the 49 victims of Pulse's shooting held the next day was filled with flowers, rainbow flags, makeshift decorations and the voices of community members. As a crowd lined the streets outside of the bar, so did a visibly armed police presence. Some of those officers held assault-style weapons like the one used to attack Pulse.

NYC Pride's co-chairs Maryanne Roberto Fine and David Studinski have assured the public that the upcoming Pride festivities would continue in spite of Orlando.

"The reason for this is simple: We must never let those who wish to silence us win," the co-chairs wrote in a statement. "Since the news broke out of Orlando, our staff and executive board have been in communication with the NYPD and our private security team, both of which are now putting together plans to adjust our existing security protocols in light of the Orlando attack."

The city's police commissioner Bill Bratton even predicted, "We will probably have, somewhat as a result of this event, the largest gay pride parade in the history of the city."

And so, instead of hiding in their homes and waiting for the powers that be to provide a solution, the LGBTQ community will celebrate the city streets once more.

The vibrant spirit of Pride Week indeed remains, and this year's Pride will likely bring the community one step closer to healing.

For many, NYC Pride will be more than a celebration — it's a call-to-action. "The fact of the matter is that we are not Orlando," said Angela Dumlao, a digital advertising manager at M+R, referring to the outpour of social media responses to the shooting. "We need to do more than changing our Facebook profile pictures and giving up our 'thoughts and prayers.'"