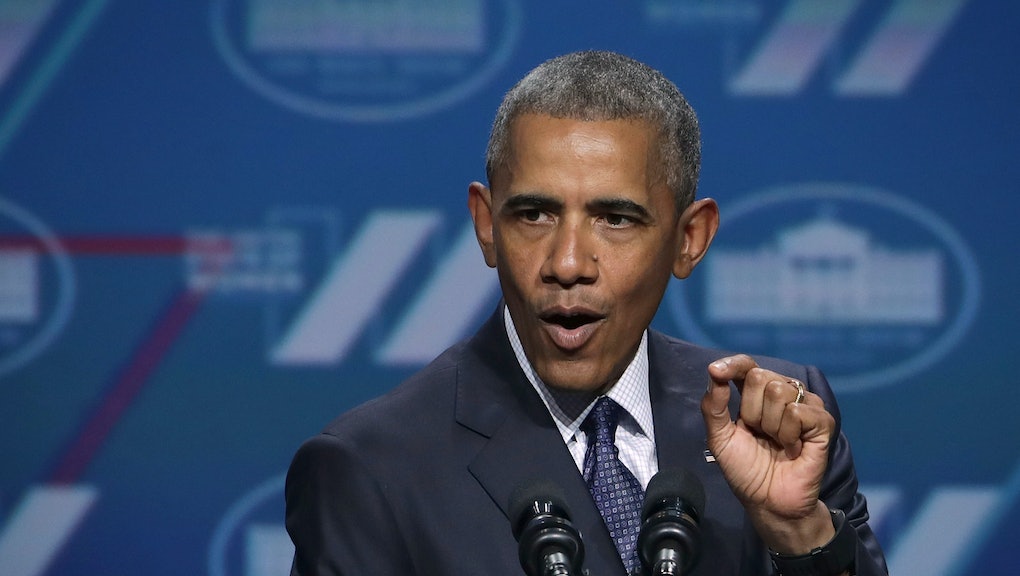 On Monday, June 27, the Supreme Court struck down a Texas law imposing restrictions on abortion clinics that would have prompted many clinics in the state to close. The 5-3 ruling in Whole Women's Health v. Hellerstedt determined that the Texas law placed an "undue burden" on women seeking abortions in Texas.

The Supreme Court ruling has been widely touted as a huge victory for women and reproductive rights advocates, one that's all the more satisfying in the context of recent attacks on abortion clinics and the several dozen abortion restrictions that have passed at the state level in the past year alone. The ruling is also significant in light of the fact that Election Day is coming up in November, forcing the abortion issue into the limelight — whether the candidates on either side of the political spectrum want it there or not.

Throughout the election, reproductive rights advocates have been frustrated with not only the Democratic candidates' treatment of reproductive rights issues, but also President Barack Obama's. While Obama has been steadfast in his conviction that women should enjoy the freedom to make decisions about their own bodies, throughout his administration, the president has avoided using the word "abortion" in public, instead opting for the terms "reproductive health" or "reproductive freedom."

Nowhere was this more evident than at the United States of Women summit, a conference intended to spotlight the status and well-being of women today, earlier this month. Typically designated as a women's issue, abortion should've been a banner discussion topic, but it didn't even make the agenda. (Planned Parenthood Federation of America President Cecile Richards proved a notable exception.)

Although the June 14 summit featured 200 speakers and presenters running the gamut from activists, writers and business owners to administration officials and the president himself, the number of times that the word "abortion" was uttered could be counted on one hand. That's a problem, said Erin Matson, co-founder and co-director of Reproaction, a group intended to increase abortion access and advance reproductive justice.

"It's just mind-numbingly odd to look at a summit that says, 'OK, let's take a big picture look at progress for women and women's lives and policy, and how that impacts women,' and leave abortion out of it," Matson said in a phone interview.

"The reality is we need to deal with the elephant in the room, and that's abortion."

The right to safe and legal abortion is in peril. According to the Guttmacher Institute, states have passed 1,074 abortion-restrictive measures in the 43 years since Roe v. Wade. 27% of those have been adopted since 2010 alone, giving "the last five years the dubious distinction of accounting for more abortion restrictions than any other single five-year period since Roe." Omnibus bills intended to force the closure of abortion clinics on a state level are increasingly frequent, as are violent attacks on abortion clinics.

Abortion is a right women stand to lose, and if they do, the implications for their health care will be dire. At a summit intended to address "key gender equality issues," it's puzzling that abortion was not a priority.

Yet the White House seems to think that it sufficiently addressed abortion rights during the summit. A White House official pointed out in a statement via email that women's health — "including preventive care, prenatal care, access to contraception, unplanned pregnancy and abortion" — was identified as "one of six key pillars" of the summit. They also clarified that the administration "support[s] the reproductive freedom of women across this country."

But as writer and activist Renee Bracey Sherman explained in an interview at the summit, by referring to abortion exclusively under the umbrella term "reproductive rights," the Obama administration missed a crucial opportunity to confront abortion stigma head-on. To fail to do so is to fail the many women who've had the procedure and feel they can't talk about it.

"We're at a point where, because abortion stigma is so pervasive, we need to be able to talk about it openly ... so it can be in the light and the stigma can go away," she said.

Abortion stigma is the likely reason why the word abortion wasn't mentioned until the eighth Democratic primary debate, despite the ease with which it was bandied about on Republican stages. The absence of any abortion-related discussion even inspired the creation of a hashtag, #AskAboutAbortion.

But to sweep abortion under the rug is to allow the right to traffic in misinformation. It allows the violent imagery associated with partial-birth abortions to persist, the Daily Beast explained, noting that the specter of Planned Parenthood sting videos hung over the first Democratic debates. For Republicans, citing the videos as evidence of abortion's evils proved a political boon; for Democrats, it proved unspeakably awkward. How does one come out explicitly in favor of something that's so polarizing? Most abortions take place within the first trimester. They look nothing like Republicans say they do.

The White House's avoidance of the term "abortion" during the summit could've been an attempt at keeping the larger conversation on-track. Perhaps the administration wanted to make it impossible for the conservative media to skew the event as a government-sponsored abortion rally, which would overshadow the other items on the docket. But in playing into abortion stigma, in trying to "dodge the controversy," Matson explained, even reproductive rights advocates "hand [the narrative] to the other side."

"The White House has a moral obligation to talk affirmatively and positively about abortion, and about the role that access to abortion has to play in this struggle for women's equality, dignity and justice," she said. Otherwise, it plays into politics that are ultimately about "keeping women down."

The argument for speaking freely about sexual assault, an issue that Vice President Joe Biden discussed at length during the summit, is not unlike the argument for speaking freely about abortion. As Bracey Sherman pointed out, in both cases, women often struggle with feelings of shame after having an abortion, assuming they will face stigma if they openly discuss their experience.

In a study she conducted with the Sea Change Program, Bracey Sherman surveyed 39 women and conducted in-depth interviews with 13 women. She found that the most common reasons women didn't discuss their abortions were fear of "negative reactions from family members and friends; backlash in their community; and threats via online comments, on social media and in person." Yet after publicly sharing their stories, 92% felt good enough to keep doing it.

When we start talking openly about taboo topics, policy changes. What was taboo becomes normal. That's why Bracey Sherman thinks it's time for the White House to set an example.

"The words I'm waiting for Obama and Biden to say [are] about how everyone knows someone who's a survivor of rape or sexual assault, but everyone knows and loves someone who's had an abortion," she said. "They probably just don't know it yet. And if we could get the highest office in our nation to stand behind us, that would be huge."

Matson agreed. Rather than trying to "sanitize feminism and women's empowerment to be less controversial," she said, Obama should "lean into the controversy." He should take the same "muscular" approach he has with executive action on transgender rights, gun violence and marriage equality, and in so doing, leave behind a legacy that protects women.

"It would be seismic," Matson said, "if the White House were to go out there and specifically embrace abortion, say the A-word." Obama can't truly call himself a feminist until he does.