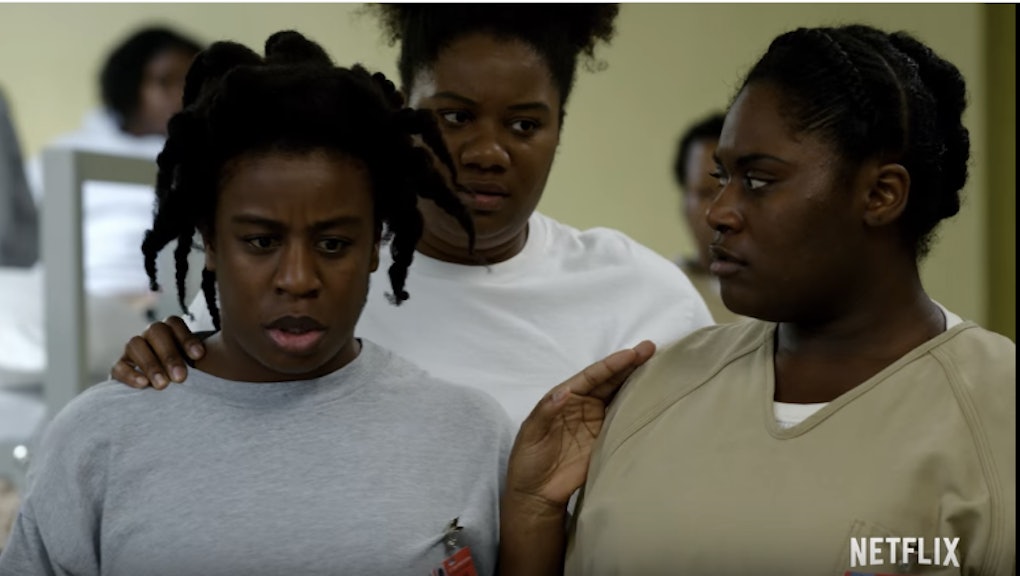 This 'Orange Is the New Black' Character's Death Was Inspired by Tragic, Real-Life Events

The continued success of Netflix's Orange Is the New Black hinges on its ability to tackle relevant social issues within the confines of the fictitious Litchfield Prison. Season four, to that point, isn't just the best season of the series to date, but the one that's most enveloped those narratives — none more powerful than its take on the Black Lives Matter movement.

(Editor's note: Spoilers for Orange Is the New Black season four ahead)

Unfortunately, to really allow this message to resonate with viewers, it meant the death of a beloved character in the ever-charismatic Poussey (Samira Wiley). The death itself was controversial for Litchfield, as she was killed during the staging of a peaceful protest by the prison's inmates, who wanted the imposing, tyrannical prison guard Piscatella (Brad William Henke) to resign.

Poussey's death was more than just the tragic death of an inmate; it was a direct nod to several high-profile killings of black Americans by law enforcement. Poussey was killed in a strikingly similar way to Eric Garner, who suffocated at the hands of a police officer while selling cigarettes on the street in New York City in 2014. Garner's final words — "I can't breathe" — became a powerful mantra of the Black Lives Matter movement.

In season four, episode 12, Poussey was being restrained by C.O. Baxter (Alan Aisenberg) as he was trying to handle Suzanne (Uzo Aduba) attacking him, and unintentionally killed her by pinning her down by the neck, obstructing her breathing. Then, like the controversial 2014 killing of Michael Brown — who, after he was shot by police officer Darren Wilson in Ferguson, Missouri, was left lying in the street — Poussey's body was left in the prison cafeteria for hours (in the show's case, overnight) as the prison's new management debated on how to spin the death to the media to avoid culpability.

When Warden Caputo (Nick Sandow) finally announces the death to the press — this after management conceded that Poussey's military background and charismatic demeanor would make it hard to paint her the villain, instead targeting Baxter as a reckless, rogue guard — doesn't reference Poussey by name. This fact enrages Poussey's best friend, Taystee (Danielle Brooks), who rallies the rest of the inmates over her disbelief that they won't say Poussey's name, echoing the controversy of Sandra Bland's death in July.

As an amalgam of these contentious deaths, it also placed the priorities of the Litchfield inmates toward the real villains of this season: the new prison guards and institutional evil. While the majority of season four set forth a culture war between different prison factions, such as the Latina group headed by Maria Ruiz (Jessica Pimentel) and Piper (Taylor Schilling)'s unintentional formation of a white supremacist group, the common enemy was ultimately the guards' abusive power that affected each of them.

While the tension boiled over when Poussey was killed, it reached a fever pitch by the final scene of the season, in which a particularly horrible guard Humphrey (Michael Torpey) drops the gun he brought into Litchfield at the hands of Daya (Dascha Polanco), who picked it up and aimed it at him. We don't know if she pulled the trigger or not — or perhaps, if another inmate will opt to shoot him in place of her.

However, what is clear is that the scene — and the controversial events that preceded it — mark an irreversible change at Litchfield. Like the show itself, which has slowly transitioned from a more comedy-centric series to one that's heavy and reliant on drama, the stakes will never be higher going into season five. For the prisoners, it's now more than just serving time; Poussey's death demonstrates it's also about survival.