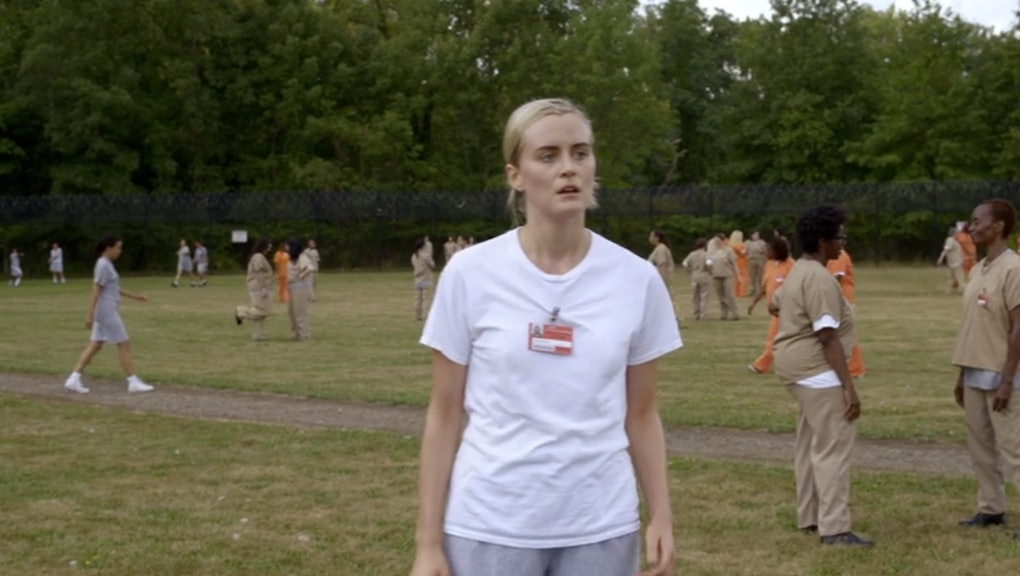 What It's Like to Have Your Period in a Women's Prison

Periods can turn a women's prison into a hormone-charged hell when inmates don't have access to affordable menstrual products and facilities don't enforce humane policies.

The topic recently gained more attention after the launch of the fourth season of Netflix's Orange Is The New Black, which featured an episode centered around the facility's shortage of pads and tampons. In the fifth episode, the overcrowded facility deems menstrual products "inessential" and prisoners are forced to pay for them themselves. Inmates without money must barter on the prison's emerging black market for menstrual products.

In Orange Is the New Black, prisoners had an option of buying overpriced supplies at the commissary — but that's not always the case. Former California inmate Maria*, who asked to remain anonymous, said she only had limited access to pads provided by the prison, as there were no supplies available for inmates' purchase. She sorely missed tampons and Tylenol during two years in a high-security prison.

"You were given an allowance [of menstrual pads] and they kept track of how often you asked," Maria said in a phone interview. "We weren't allowed to use tampons, which is terrible. As someone who doesn't use pads on the outside, I was forced to stew in my own fluids."

New York activist Jennifer Weiss-Wolf agreed with Maria, stating in a phone interview that limiting the number of menstrual products for prisoners "isn't good for anyone's health or well-being," noting that "the idea of allocating a certain amount of pads ignores the fact that [monthly flow] is not the same for every woman, even from month to month."

One city, however, is taking a stand against this issue. On Tuesday, New York City voted to pass a package of menstrual equity bills that will guarantee citywide access to menstrual products in schools, homeless shelters and jails.

"Providing menstrual hygiene products privately, immediately and for free is also about sending a body-positive message by not perpetuating shame and humiliation and secrecy," Council Member Julissa Ferreras-Copeland, who spearheaded the legislation, said in an email. "Women serving time in prison, have value and deserve respect and dignity during their periods."

"New York is the first major city to pass a package legislation like this, that calls out the idea of menstrual equity," said Weiss-Wolf. She played an instrumental role in developing the new groundbreaking policy, which was first discussed at a roundtable in June 2015. Weiss-Wolfe, who testified at council hearings as she campaigned against the broader tampon tax, believes Tuesday's vote is only the beginning. "Getting rid of the tampon tax in a few states is just the tip of the iceberg," she said. "We're going to take this [legislation] to other cities."

Activists and entrepreneurs across the country are crusading to end period stigma and draw attention to how it affects disenfranchised women.

The Orange is the New Black plotline's take on the issue isn't that far from reality. In 2015, the Correctional Association of New York published a report that found that 54% of female inmates said they didn't have enough sanitary pads each month. "They end up bleeding all over their clothes and have to stay in bloody clothes," Weiss-Wolf said. "Obviously the risk of infection and odor can be rectified by access ... This is a matter of basic health and dignity."

Rationing menstrual products and restricting access to laundry can leave inmates in an unhealthy and humiliating situation. "Stains on clothes seep into self-esteem and serve as an indelible reminder of one's powerlessness in prison," wrote former Connecticut inmate and prison blogger Chandra Bozelko.

Inmates can usually buy extra products in the prison's commissary, but they are only available at inflated prices. The Correctional Association report estimated that a single box of tampons can cost an inmate her entire week's earnings. On Orange Is the New Black, women who earn 10 cents an hour must save up to buy a single $10 box of tampons, and New York Magazine reported that in one prison, eight tampons can cost $4.23.

In 2014, the ACLU of Michigan filed a lawsuit on behalf of numerous women, citing how the Muskegon County Jail failed to provide adequate period supplies and frequently didn't let prisoners change out of soiled clothes until "laundry day." The suit also alleged that guards were permitted to humiliate menstruating women. Former inmate Londora Kitchens said that when she asked an officer for supplies, he admonished her that she "better not bleed on the floor."

According to the nonprofit A Woman's Worth Inc., which helps inmates get hygiene supplies, "for-profit prisons often charge extraordinarily high prices for pads and tampons and not for profit prisons, often due to limited budgets, simply run out and have none available."

One inmate in Washington wrote a letter, published by the Committee Against Political Repression, in which she described menstrual products being used as bargaining chips or leverage to manipulate prisoners. She wrote that the facility didn't provide enough pads didn't always have materials available for purchase at commissary. She described menstruating in prison, and struggling to get supplies, as "an experience that either intentionally works to degrade inmates, or degrades us as a result of cost-saving measures: either way, the results are the same. Prison makes us hate part of our selves; it turns us against our own bodies."

As if not having a pad or tampon wasn't uncomfortable enough, a report published in the Internet Journal of Criminology suggests that incarcerated women experience "a higher degree of menstrual irregularity and symptom distress" — such as cramps and headaches — than women on the outside. A whopping 58% of surveyed prisoners with regular periods said they felt especially "irritable, anxious or depressed" around their monthly cycle.

There doesn't seem to be a national policy moderating how periods are handled behind bars. Los Angeles-based artist and activist Kiran Gandhi suspects that's because lawmakers are simply uncomfortable talking about periods and women's bodies in general.

"Period stigma is what's blocking that [political] issue. It needs to be framed as a human rights issue," Los Angeles-based artist and activist Kiran Gandhi said in a phone interview. She's become one of the menstrual rights movement's most visible spokeswomen since she "free bled" at last year's London marathon to raise awareness about period stigma.

Gandhi sees a clear correlation between public conversation and legislative action. "The reason we're seeing policy change today is because of radical activism and art," Gandhi said. "Policymakers don't give a shit unless the people actually care about it ... It's 2016 and this [NYC bill] is just passing, which shows the lack of conversation that we've needed to have for so long."

*Names have been changed to protect subjects' privacy and allow them to speak freely on private matters.