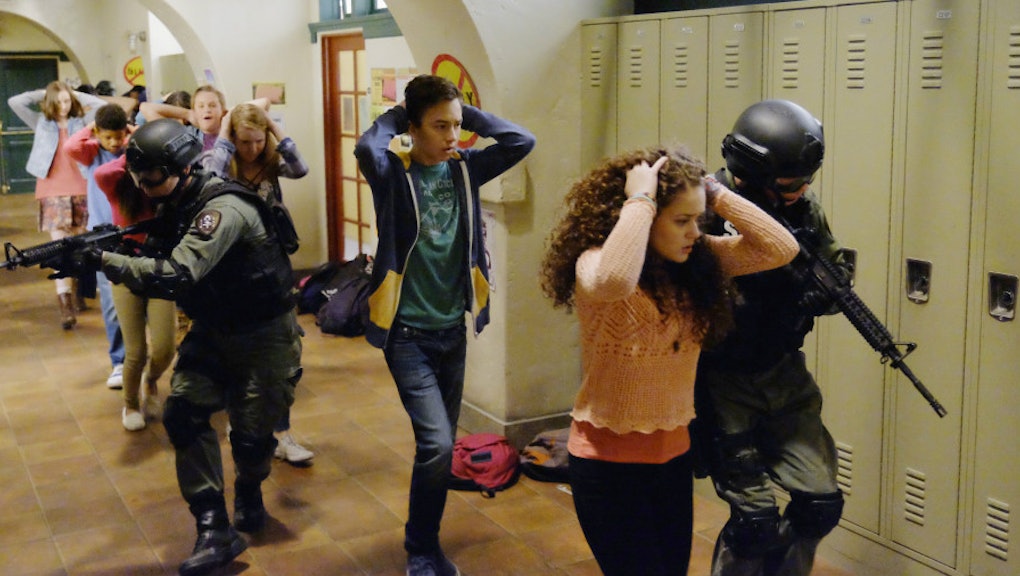 The Fosters' season four premiere put gun violence, a topic that has increasingly been in the public discourse, especially in the wake of last week's Orlando Pulse nightclub shooting, front and center. The unsettling episode, which aired Monday, showed just how easily someone can access a gun, and the great lengths schools must go in order to prepare for a shooting, which have become all too common in the United States.

(Editor's note: Spoilers for the season four premiere of The Fosters ahead).

In Monday's episode, an unstable student, Nick (Louis Hunter), is upset with his girlfriend Mariana (Cierra Ramirez) because he believes she cheated on him, and brings a gun to school. The gun is owned by his father, and the show is quick to point out that even a legally purchased gun with a carry permit can fall into the wrong hands.

Additionally, the episode picks apart the concept of having a gun as the best defense for an active shooter. While the school is on a "Code Blue" lockdown and a SWAT team rolls in to account for students and the shooter, a substitute teacher brandishes his gun — assuming the SWAT team is the shooter himself. This causes a panic for the students stuck in the classroom with him, but nobody is hurt.

Throughout the episode, no one is actually killed, but it didn't have to rack up a body count to prove a point. As The Fosters showrunner Bradley Bredeweg said earlier, it's an important, and timely commentary following the Orlando shooting.

"Orlando, obviously, is one of the most tragic things that has ever happened in this country," Bredeweg said, in an interview with TV Line, published Saturday. "So this episode is very timely. Unfortunately, I feel like this episode is timely no matter what point we're at in this country. That's why it's so important for us to explore the subject matter on the show."

Fans of the The Fosters, which has been lauded for tackling other important storylines, including the youngest gay kiss on television, heaped praise on Twitter following the intense premiere.