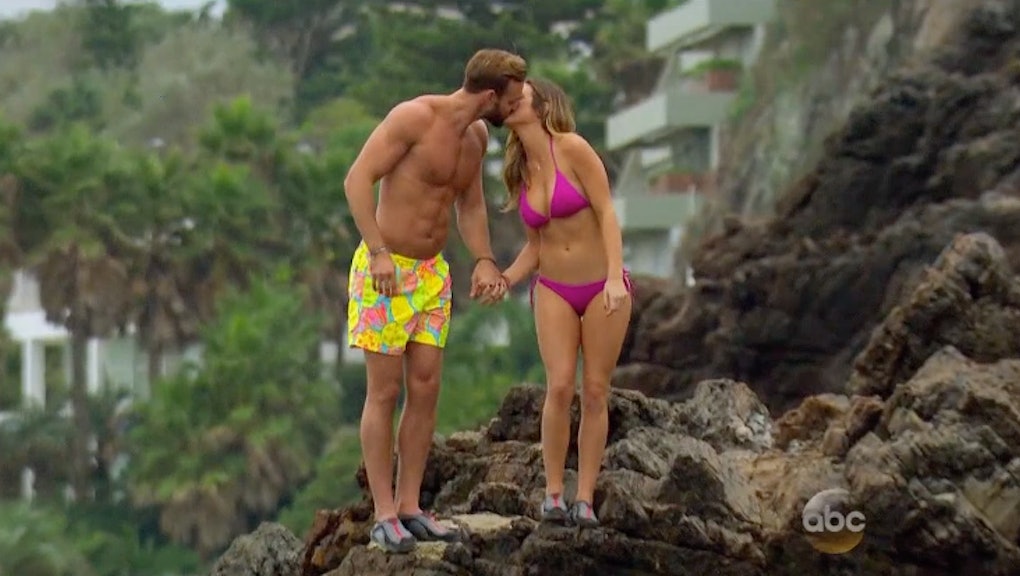 Ding dong the Chad is gone! This week's episode of The Bachelorette kicked-off right where we left it two weeks ago — in the backwoods of Pennsylvania (?), a whistling Chad stalking through the woods like an angry Chad bear. He comes back to the lodge just as all the dudes are celebrating his defeat by tossing his protein powder in the air.

Luckily everyone emerges unharmed (except Jordan's hand, which Chad squeezes really, really hard) and Chad leaves the house, and the show, without beating anyone up or apologizing — or buying Evan a new shirt.

Moving on to the kissing contest cocktail party, the men wither as Former Competitive Swimmer Robby kisses JoJo in front of everyone! But then Former Pro Quarterback Jordan kisses her even more. Jordan is the kissing winner.

We're getting to that stage of the game where the dudes become obsessively insecure and are constantly calculating their odds of making it to the end. Here's the thing — most of them won't.

At long last we get our Rose Ceremony and, sadly, say goodbye to James F. and Daniel, who will presumably return to his job as "Canadian." Oh James F., we hardly knew ye. (Seriously, who are you?) Daniel's exit interview is probably the most interesting thing he does all season because he basically tells the country that his personality sucks. Which is, at the very least, self-aware.

Anyway, now it's time to leave Pennsylvania — again, why? — and go to a decidedly more exciting place like Uruguay!

Jordan gets the first one-on-one date, and JoJo tells him that she's talked to his ex and she did not say nice things about him (but how did they meet?!). But Jordan, fluffily-coiffed Casanova that he is, manages to convince JoJo that he is Here for the Right Reasons (HFTRR). Then they kiss more.

Meanwhile, back at the hotel, Barber Vinny is wearing a fedora and giving out haircuts — no one seems to care that Vinny himself still rocks the Caesar haircut that went out when George Clooney left ER — and the dudes have SOMEHOW gotten ahold of a copy of InTouch with a story about JoJo still being in love with her ex-boyfriend from Texas, Other Chad.

Obviously this upsets Alex a lot, sensitive man that he is. His eyes basically bug out of his head while he's reading. Alex just can't get away from Chads!

Once JoJo returns from her Jordan date, a producer kindly informs her that all of the dudes are reading bad things about her in a magazine that they SOMEHOW managed to find just casually laying around in a hotel in Uruguay. Somehow...

This is very, very sad for JoJo (she later calls it the "worst day of her life," suggesting she was dealt a pretty solid hand) and she's worried that the guys will think that she's not HFTRR, so she goes to their room to set the record straight and cry. Because she is HFTRR. They all reassure here that Original Chad sounds like an asshole, and they trust that she's HFTRR. Then — because they, too, are HFTRR — each dude takes a turn hugging her.

Now it's time for everyone's fave activity, a group date! While Jordan and Robby have a spa day eating the cucumbers off their faces, the dudes on the date go "sand-surfing" until it starts to rain. It's mostly just bros rolling down a hill.

They're all starting to get snippy about the awkward, competitive nature of group dates — like who gets to help JoJo step over a rock, who gets to touch JoJo's head while she just stands there, you know, normal date stuff.

At the evening part of the date they take turns kissing JoJo and talking about feelings. Derek tells JoJo he's worried about their connection, so she "reassures" him by giving him the group date rose. Alex the Marine Devoid of Chill doesn't like this, not one bit.

Alex calls it a "pity rose" and says that Derek is a "little bitch." Alex needs to chill because he is headed down the dark road to Bittersville.

Robby gets the next one-on-one date and turns out a strong showing. This guy's gunning for Hometowns. Robby, whose occupation is listed as "Former Competitive Swimmer" (what does that look like on a day-to-day basis we wonder?), gets a swim date and shows off his rocking abs. They both show off their ability to rock Day-Glo.

Then, he and JoJo leap off a cliff together. GET IT? IT'S A METAPHOR FOR LOVE!

And at the nighttime part of the date, Robby tells JoJo that he loves her. It's a little early but whatevs, life is a highway and Robby's going to ride it. JoJo says thanks for the love but also she doesn't say it back because it's only been a month and also she's not Ben Higgins.

There's no cocktail party this weekend because JoJo has made up her mind and also this episode is a million years long — so we skip right to the Rose Ceremony. But while the dudes are in their holding pen, Jim Halpert Derek decides to tell Jordan and Chase and Robby and Alex that they're being totally mean and cliquey and it's hurting his feelings.

Jordan goes all Regina George on him and tells Derek that no one feels excluded but him, further proving that Jordan was definitely a bully in high school. So fetch.

Everyone shrugs off the drama and puts on their best faces for the Rose Ceremony, where we say goodbye to Firefighter Grant, Barber Vinny and, at long last, Erectile Dysfunction Expert Evan who cries into his sleeve and walks off into the night.

Next week on The Bachelorette, the guys continue their petty feuds and untamed jealously and also we go to a different country! See you all in hell Argentina!