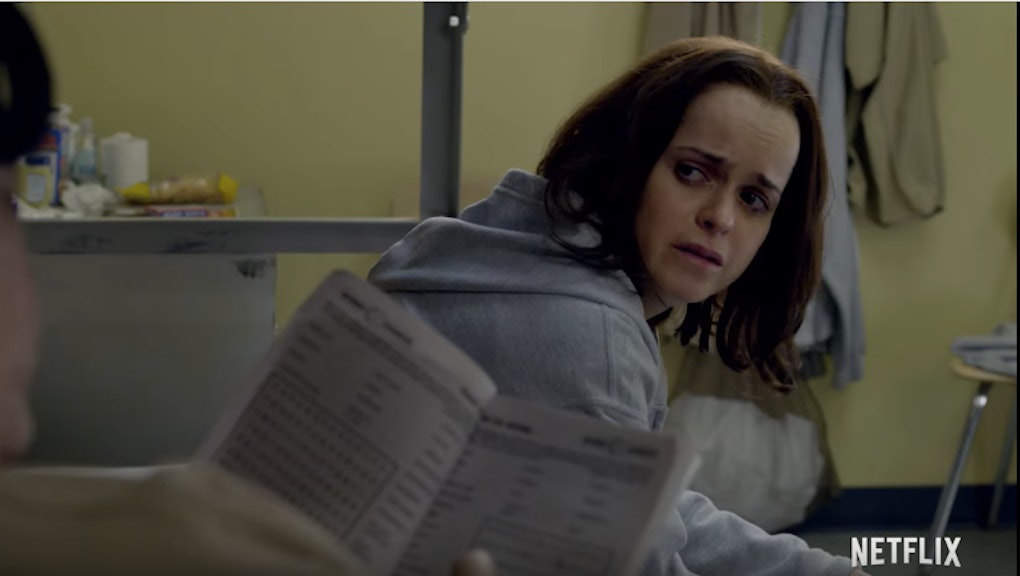 There's very little commonality between Game of Thrones and Orange Is the New Black, aside from expansive casts and complex storylines. But both series did tackle one noteworthy issue in their 2015 seasons: rape — albeit with very different outcomes.

In Orange Is the New Black's third season, Litchfield Prison inmate Pennsatucky (Taryn Manning) is raped by prison guard Coates (James McMenamin). The realistic and chilling portrayal of the crime was praised by critics, particularly for the way the effect the assault has on the victim surfaces not in one single shot or episode, but rather permeates scenes throughout the season.

"Rape is not sexy, or a plot point, or a shocking secret to be set up for a dramatic reveal," Vulture's Jada Yuan wrote in July. "The reason — the only reason — to film a rape scene is to make the audience dig into that feeling of discomfort, to force us to be witnesses to the torture we are capable of inflicting on one another and come away with a deeper understanding of who we hurt and the depth of their pain."

It's a rule of thumb, Yuan argues, that Game of Thrones' writers in particular could do well to consider.

Last season, the HBO series was panned for failing to do just that. There was no point to Sansa Stark (Sophie Turner)'s much maligned rape scene by her newly betrothed, sadistic husband Ramsay Bolton (Iwan Rheon). We had seasons' worth of evidence that Ramsay was the worst person in Westeros (and arguably all of television); the rape didn't do anything to further the plot. It didn't even focus on Sansa's suffering, but rather the suffering of Theon Greyjoy (Alfie Allen), his face grimacing as he was forced to watch.

It's the very reason some thinking fans, like Missouri Sen. Claire McCaskill, have stopped watching the series — and it's hard to blame them.

One year later, and both storylines are playing a part in each series' new season, in ways true to the nature of their respective shows.

Orange Is the New Black harps on Pennsatucky's choice to forgive her rapist, a slow-building theme throughout the 13 episodes with plenty of bumps along the way. When fellow inmate Lolly (Lori Petty) builds a "time machine" out of cardboard, Pennsatucky asks Coates what he would do differently if he could go back in time. He initially says going to a Judas Priest concert he missed with his buddies; it's only later that he comes to terms with the rape, and changes his answer.

However, owning up to a crime hardly absolves the perpetrator, and Big Boo (Lea DeLaria) tells Coates that Pennsatucky's choice to forgive him doesn't vindicate his previous actions, and she'll literally kill him if he ever does so much as hurt her feelings. But given the nature of a show set in a prison where the characters are serving time for their crimes, forgiveness will inherently be a theme. Whether the audience chooses to forgive Coates is irrelevant, as Manning told Marie Claire — it's ultimately Pennsatucky's choice. We can, and should, come to terms with her choice to forgive, even if we won't accept the same absolution ourselves.

"I invite the controversy, I invite the challenge to people," Manning told Marie Claire on Monday. "And at the end of the day, Pennsatucky's OK. She's alright. She survived. So, if she's OK, everyone else should be OK, really. It's the path she wants to walk down. Let her stumble through it."

This season on Game of Thrones, meanwhile, the women are taking charge of Westeros — and how they confront the threat of rape speaks to the show's violent nature, controversial or otherwise. When Dothraki leaders threaten to rape and murder Daenerys Targaryen (Emilia Clarke) for her dismissal of their traditions, she burns them alive.

Most recently, Sansa is able to confront Ramsay. After Jon Snow (Kit Harington) defeats Ramsay in the highly anticipated "Battle of the Bastards," she looks on as Ramsay's own beloved hounds — the ones he starved for a week prior to the battle — ate him alive.

Brutal? Yes, but also accurate to the conventions of the show. Ramsay was cartoonishly evil; someone who, up until his death, delivered on every disturbing promise the series presented him with. As Vox's Todd VanDerWerff posits, Ramsay is the embodiment of the chaos of the series, living in a world that invites people like himself to succeed (and he did for a long time).

It's also a series where women, cunning as they may be, are rarely afforded opportunities to rule. Thankfully, this dynamic in changing at a frenetic pace, with the likes of Daenerys, Sansa, Yara Greyjoy (Gemma Whelan), Cersei Lannister (Lena Headey) and Margaery Tyrell (Natalie Dormer) all in positions of power. But before they could do that, some had to confront, and ultimately destroy, their abusers.

Both Orange Is the New Black and Game of Thrones have tackled rape this season with widely different approaches — and one show, to be sure, has a much better track record with the sensitive subject. However, at a time when convicted rapists are treated with kid gloves and victims' testimonies are thoughtlessly dismissed, television writers have a lofty responsibility to take up the issue with nuance and care.