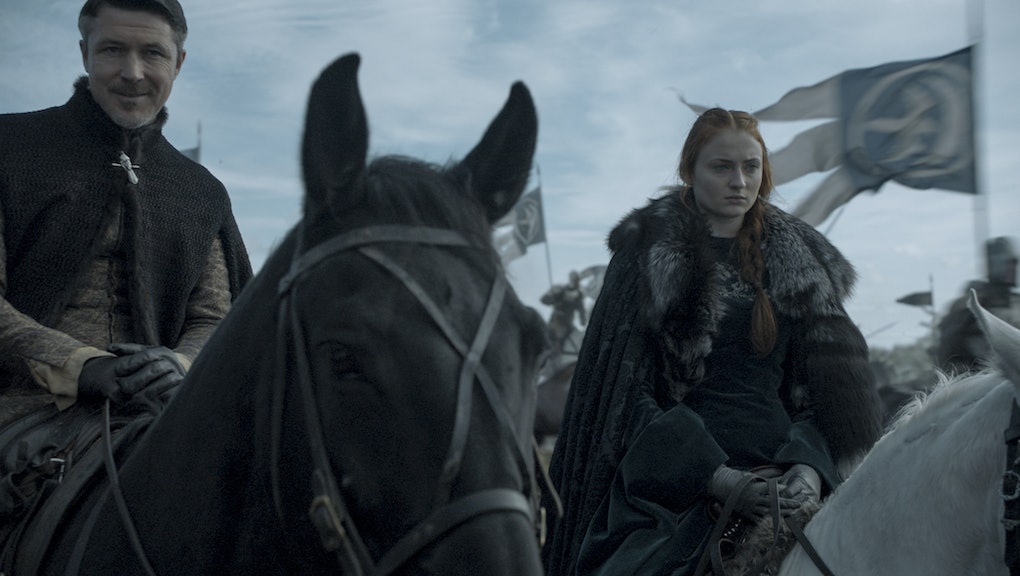 The result many fans expected to happen from Game of Thrones' epic "Battle of the Bastards" came true: Jon Snow and the House Stark loyalists were able to overcome Ramsay Bolton's forces and reclaim Winterfell. What was less obvious, however, is how they got there.

Jon's forces were being decimated by the Boltons, who had them in a Carthaginian-esque envelopment, trapped by soldiers and mounting corpses alike. Thankfully, and with nary a moment to spare, Littlefinger and the Knights of the Vale came to the rescue, and from that point Ramsay's forces were soundly defeated. Soon after, Ramsay was treated to a poetically gruesome death from his own starved hounds.

However, Littlefinger's last-minute assist came through Sansa Stark sending a letter his way prior to the battle — a fact she kept secret from Jon and the Stark army.

Given how close Jon was to suffocating from a sea of bodies and his own men, it was a fact that has pretty grim implications if Sansa was aware of Littlefinger's timing. Here are three reasons Sansa could have opted to keep the secret from Jon:

Sansa wasn't sure Littlefinger was coming.

While she did send the letter to Littlefinger, there might not have been enough time for her to receive assurance from him that he'd come with the Knights of the Vale. Sure, he had offered to help her cause when they spoke earlier in the season, but she curtly told him she didn't need his help — and even threatened to have Brienne of Tarth kill him for setting her up with Ramsay in the first place.

Without the assurance of Littlefinger's army, she might have viewed it as a moot point for Jon, who had to plan ahead with the limited men he had (he would have kept that plan during the battle by waiting for the Boltons to attack them, if Ramsay had not lured him into a trap using Rickon Stark as bait).

Sansa used Jon and the Stark forces as bait to get Ramsay out of Winterfell.

Disturbing as it may be, Sansa might have been consigned to Jon's potential death on the battlefield by intentionally omitting the arrival of the Knights of the Vale. Ramsay would've had a sufficient advantage if he had stayed within Winterfell, and likely would have retreated back behind its walls were Littlefinger's forces there from the beginning.

Sansa clearly wanted to see Ramsay killed — her pleasure in seeing him eaten alive proved that alone — even if that meant Jon and Rickon had to be used as pawns for his eventual demise. It's dreadful, but that's something the likes of Littlefinger or Ramsay would pull off; the people she's had the most contact with in the previous two seasons.

Of course, if she was willing to see her brothers die as a means to take back Winterfell, the implication is that Sansa is, for all intents and purposes, a villain — and a Stark only by name.

She wanted the credit for taking Winterfell.

The Littlefinger trump card is inherently a victory for the Starks, but especially Sansa for pulling it off. It's important too for Sansa to demonstrate her value as more than a nominal Stark family member. Throughout the season, she and Jon have been clashing on how to best handle Ramsay and rally the North to their cause, her methods in the end proved successful.

It's unclear whether she and Jon will be competing for ruling rights at Winterfell; because he is a bastard, her claim takes precedence anyway.

Whatever Sansa's decision was to keep this fact from Jon — and chances are we'll have some inkling to her mindset during the season finale — this fact is ultimately indisputable: Without Sansa's help, Jon and his army would be among the sea of bodies outside Winterfell.