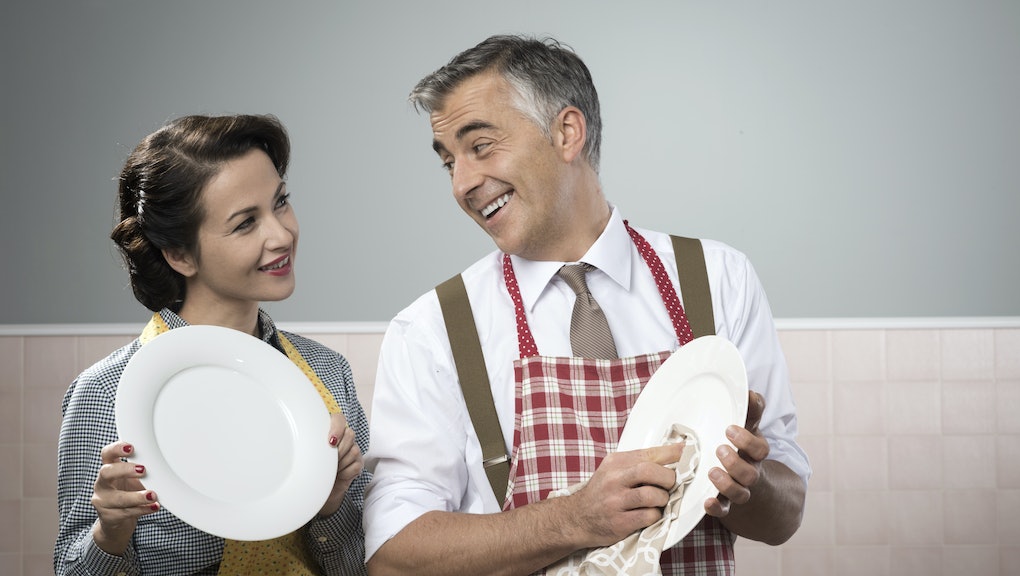 If you were a housewife in the 1950s, you pretty much had nothing else to do but cook and clean and listen to your soaps and take your husband's D while thinking about how you need to clean out the icebox tomorrow. (Yes, iceboxes were a thing, and they weren't great. The ice would melt and various food juices would intermingle with one another and it was gross.)

Luckily, times have since changed; not only have food storage systems improved exponentially, but women are now allowed to do things other than take care of their households. That means men are picking up the slack when it comes to doing chores, and contrary to the grumblings of MRAs or those nostalgic for the Leave it to Beaver era, that doesn't make them emasculated — in fact, quite the opposite.

According to recent research from Cornell University, couples that share the housework tend to have more sex than couples that don't, flying in the face of those who champion traditional gender norms.

While that difference might seem negligible, it's more symbolic than anything else, according to the study's lead author and Cornell University professor Sharon Sassler. That's because it flies in the face of traditional wisdom that women's entry into the workforce has resulted in domestic strife, which has in turn resulted in fewer forays to the bone zone.

"There's been a lagged response to women's transition into the workforce. Initially it was stressful," Sassler told Quartz. "It affected relationships. We've had a few decades to educate each other about the stresses we went through, and we are coming out okay."

That doesn't necessarily mean that men and women are living in a gender-neutral Nordic-inspired utopia and dividing the housework perfectly equitably: they are not. A 2014 study from the Bureau of Labor Statistics found that women were still performing the vast majority of household chores like cooking and cleaning, with 83% percent of women reporting having done some form of housework on the average day versus a piddling 65% of men.

And yet! The fact that an equitable division of domestic labor won't have a detrimental effect on your sex life is undoubtedly good news — not just for couples trying to keep track of whose turn it is to do the laundry on the chore wheel, but for women who are looking for a reason to get their husbands to clean the goddamn toilet bowl every once in a while.

The only thing that's missing? Statistics for couples who don't do any housework at all, opting instead to stew in their own filth like pigs in shit.