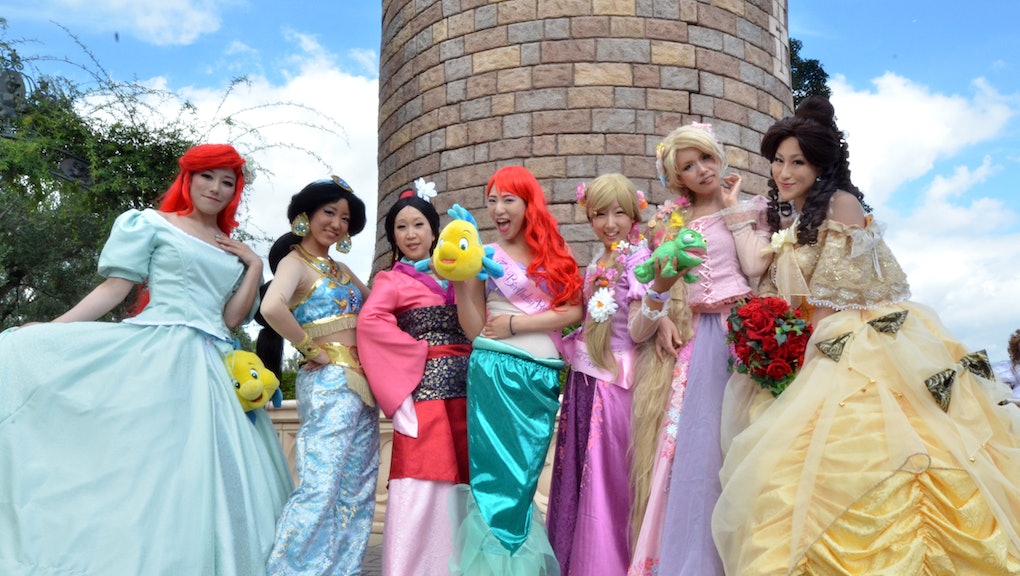 We all know our favorite Disney movies have problematic undertones, from The Little Mermaid (Ariel swaps her musical talents for the love of a handsome prince) to Beauty and the Beast (Belle essentially develops Stockholm syndrome after being imprisoned by the Beast.)

The study looked at the behavior of 198 preschoolers and how much they engaged with so-called "Disney Princess culture," including watching princess-themed movies and playing with toys, etc. The researchers interviewed the preschoolers and assessed reports from parents and teachers over the course of a year.

Ultimately, the researchers found that 96% of girls and 87% of boys had interacted with some form of Disney princess media over the course of about 12 months. Yet while both boys and girls were more likely to display stereotypically "female" behavior as a result of watching tons of Disney princess movies, this behavior manifested itself differently for both genders.

"We know that girls who strongly adhere to female gender stereotypes feel like they can't do some things," coauthor Sarah Coyne, a BYU psychology professor, told Science Daily. "They're not as confident that they can do well in math and science. They don't like getting dirty, so they're less likely to try and experiment with things."

This isn't the first time that researchers have found that the Disney princess narrative might have a negative impact on young children, particularly young girls. Countless studies have analyzed Disney's role in perpetuating retrograde gender stereotypes, with one 2016 study finding that the male characters in most Disney movies have more lines than the female protagonists.

That said, there's still hope for feminist parents who love princess tales. The report recommends that parents have an ongoing conversation with their children about Disney movies as a way to curtail their potentially negative impact. Coyne suggested that speaking critically about princess media could have a significant effect on kids' behavior, offering her own discussions with her daughter about Princess Merida in Brave as an example.

"In the marketing, Disney slims her down, sexualizes her, takes away her bow and arrow, gives her makeup," Coyne told Science Daily. "So then we're at the supermarket and see this 'new Merida' on fruit snacks and soup cans, and I point it out to my daughter and we have a conversation about the difference."

Jerramy Fine, feminist write and author of the book In Defense of the Princess, also offered some advice for how parents can draw empowering lessons from fairytales.

"Talk about how the Disney princesses aren't afraid to speak their minds...Use these examples to encourage girls to speak up in class, to state their opinions, and be ready and willing to defend them. Talk about how real princesses don't always live happily ever after," Fine told For Her.