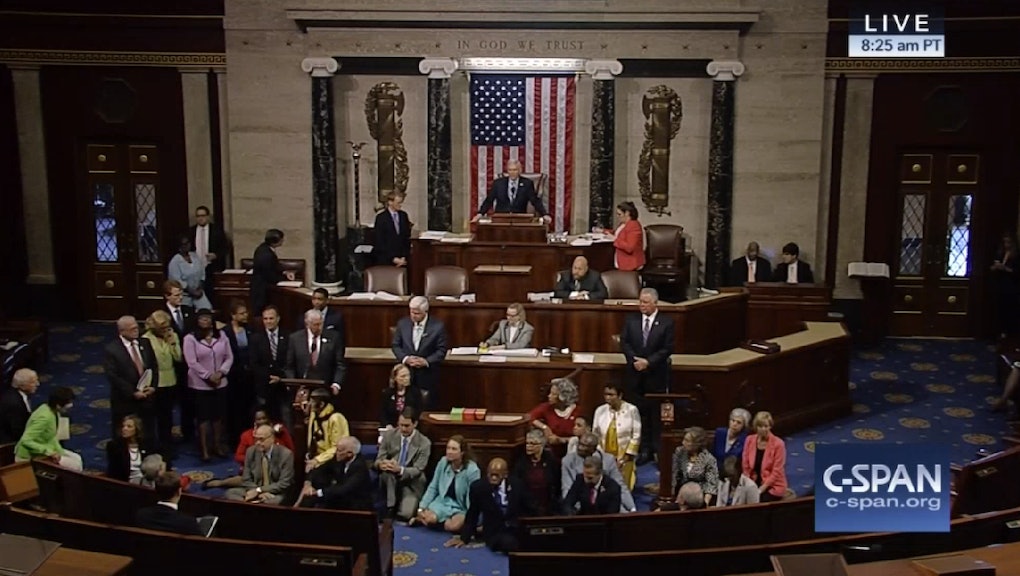 Democratic members of Congress staged a sit-in Wednesday morning on the House floor, demanding a vote on gun reforms in the wake of the Orlando, Florida, massacre.

Led by Rep. John Lewis, a Georgia Democrat who was a leader of the civil rights movement, more than two dozen members joined the sit-in — which came a little over a week after 49 people were killed and 50 more injured when a man opened fire on a gay nightclub.

"We have lost hundreds and thousands of innocent people to gun violence," Lewis said at the outset of the sit-in. "Tiny little children, babies, students and teachers, mothers and fathers, sisters and brothers, daughters and sons, friends and neighbors. And what has this body done, Mr. Speaker? Nothing. Not one thing. We have turned a deaf ear."

Because the sit-in began as the House gaveled into recess, it was not broadcast on C-SPAN, the only television network allowed to film on the House floor.

To circumvent the lack of television coverage, lawmakers involved in the sit-in tweeted their own photos, despite the fact that photos are not allowed in the chamber.

Some members even broadcast the sit-in on Periscope, before the House came back from recess and the C-SPAN cameras turned back on.

During the sit-in, members chanted "I'm sick and tired of being sick and tired" over gun violence, according to reports from the chamber.

The sit-in comes two days after the Senate failed to pass gun reforms that would have barred suspected terrorists from purchasing guns, as well as expand background checks to people wishing to purchase firearms.

Senate Democrats staged a 14-hour filibuster to push for votes on those bills, which went on to fail.