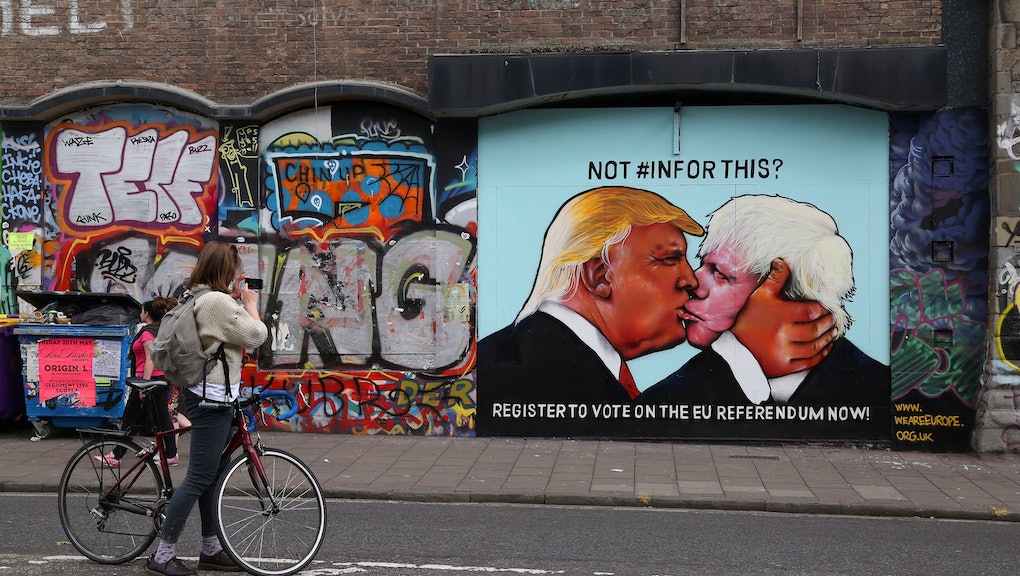 Brexit: What’s the worst that could happen?

If you're looking for work or hoping to switch jobs in the next year, one word on your mind today should be "Brexit."

That portmanteau of the words "British" and "Exit" refers to the United Kingdom's possible break from the rest of the European Union, a move being put to the vote today in a public U.K. referendum closing at 5 p.m. Eastern. So far, polls suggest support is split fairly evenly between the "remain" and "leave" camps. [Update: U.K. voters have now moved in favor of Brexit and Prime Minister David Cameron has stepped down.]

Why should you care?

A decision by Britain to break its nearly half-century relationship with the European continent would be unprecedented. The move could roil global markets and shake multinational employers, with serious consequences for global workers, job seekers, and investors — read: anyone with a retirement account — both within and outside of Europe.

While Brexit supporters say that independence from the continent would reduce the costs of bureaucracy and overregulation, the British Treasury itself has warned that the move could leave the nation "permanently poorer," by damaging trade, employment and productivity.

Before you start feeling relieved not to live in the U.K., remember that in today's globalized economy, the fates of nations are interconnected. Investors fleeing the pound or euro might drive up the value of the U.S. dollar, for example, which could hurt global demand for American products. That's bad for American companies — and the people who work for them.

"One worst case scenario might be that Brexit triggers a period of very slow global growth, so slow, in fact, that companies feel like it's too risky to take on additional workers," Oklahoma City-based financial advisor Tim Courtney said.

It's unlikely that a Brexit would push the U.S. economy into recession, Boston University economics professor Robert Margo said. However, the simple fact that nothing like this has ever occurred before means nobody can easily predict what may follow, he added.

"There might be a short-run negative effect on the British and the European economies, which could affect the U.S. economy and potentially generate a slowdown in employment growth," Margo said. "Generally, the expectation is that the effects will not be huge, but that could change if the E.U. decides it's extremely angry and takes retaliatory measures."

Even if stocks and other markets take only a short-term hit, other global economic effects might keep rippling out over the next six to 12 months, Margo said.

A scary dimension to the Brexit debate is how it reflects growing racial and social tensions in the U.K. — a trend that Americans might find familiar.

In addition to gripes about E.U. bureaucracy, a leading criticism by Britons in favor of an exit is that Europe is too open to immigration. Those sentiments have already had serious consequences: Pro-immigration and anti-Brexit U.K. legislator Jo Cox was killed last week, allegedly targeted by a right-wing extremist.

The impulse to close borders, both in the U.K. and U.S., should worry those who care about a healthy global economy, said Harvard economist Carmen Reinhart.

"Barring immigrants and looking inward in terms of trade is an invitation for your neighbors to do the same," Reinhart said. "One of the things that made the Great Depression worse was the rise of inward-looking and retaliatory policies in the 1930s. Those only aggravated the situation."

As economist Anatole Kaletsky has pointed out, the very existence of fear and uncertainty in markets changes economic reality, which can lead to a positive feedback loop of ever-increasing "anti-establishment anger." And when that ire results in policy changes, the whole world gets poorer.

British voters are rolling the dice on a future that extends far beyond U.K. borders: That future includes the prices people around the globe pay at the grocery store, the cost of their debt, the performance of their retirement accounts, and yes — their job opportunities.

Of course, if Brexit fails to pass — and even if it succeeds — the global economy might be spared. It's impossible to predict for certain.

But the nationalist anger driving the vote? That isn't going anywhere.