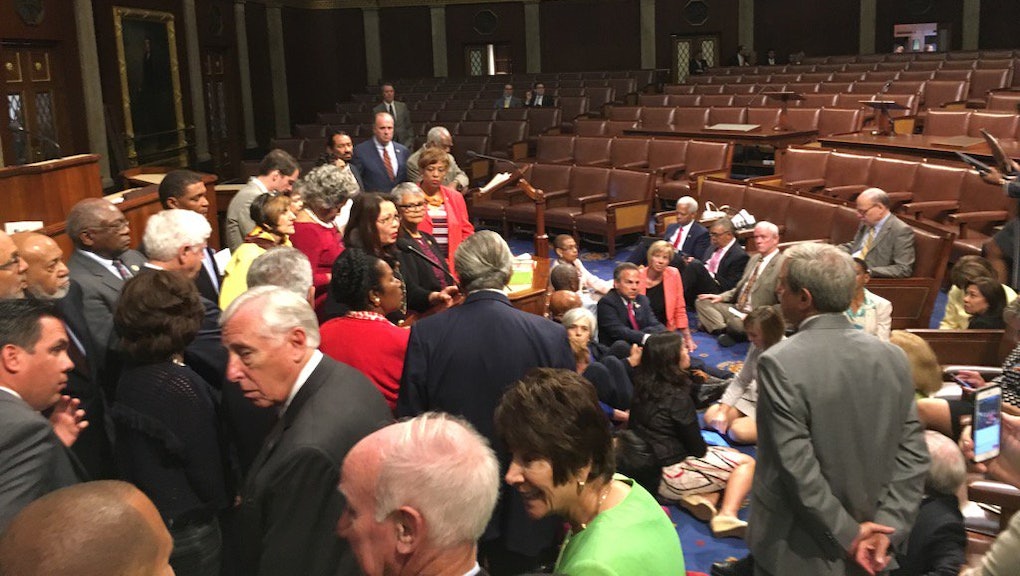 Even after the Senate voted down four pieces of gun control legislation on Monday, not everyone in Congress is ready to concede defeat.

On Wednesday, a group of about 60 Democrats held a sit-in on the floor of the House of Representatives to call for action on gun regulation measures. But, as Raw Story reported, Republicans don't want anyone to see it.

The site reported that amid the protest, Rep. Ted Poe (R-Texas) called for a recess, during which the cameras were turned off.

Before the sit-in, Rep. John Lewis (D-Ga.) opened with a statement.

"For months, even for years, through several sessions of Congress I wondered — what would bring this body to take action?" said Lewis. "What would finally make Congress do what is right, what is just, what the people of this country have been demanding and what is long overdue?"

Sen. Chris Murphy, who led a 15-hour filibuster on June 15, as well as senators Susan Collins and Heidi Heitkamp, who proposed bipartisan legislation on gun control Tuesday, are among those leading the struggle against partisan gridlock in the Senate.

"How many more mothers, how many more fathers need to shed tears of grief before we do something?" asked Lewis on Wednesday.

"We were elected to lead, Mr. Speaker," he continued. "We must be headlights, and not taillights. We cannot continue to stick our heads in the sand and ignore the reality of mass gun violence in our nation."