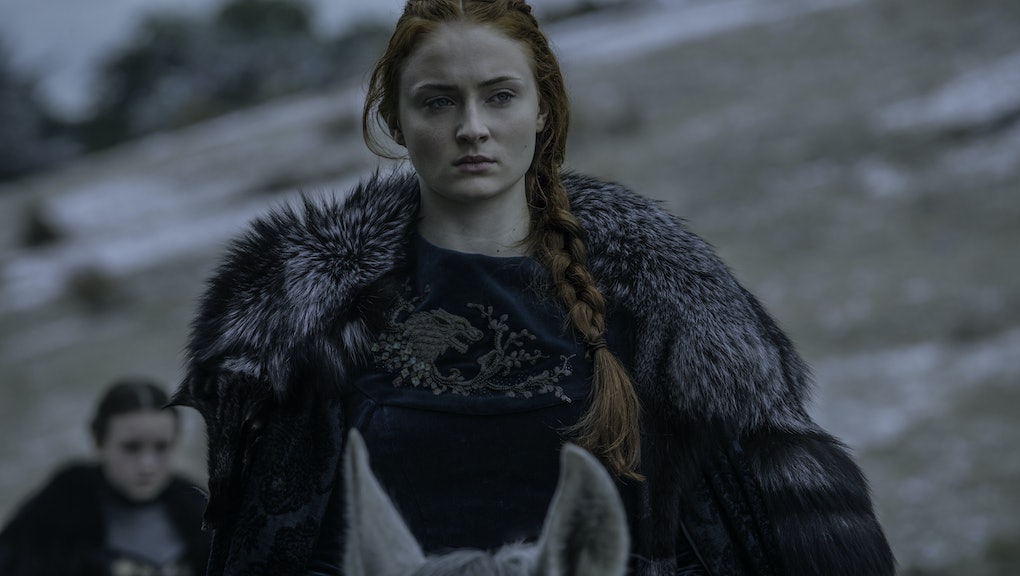 The "Battle of the Bastards" was an epic fight, and Game of Thrones fans got something they've craved for years: Ramsay Bolton, the worst person in a show of horrible people, was finally killed off. However, the solace of Ramsay's death could be overshadowed if a certain fan theory rings true: What if Sansa Stark is pregnant with Ramsay's child?

The first piece of evidence for a pregnant Sansa was from an earlier episode in the season, "The Door," in which Sansa describes to Littlefinger the mental and physical torture Ramsay put her through: "I can still feel it," she tells him. "I don't mean, 'In my tender heart, it still pains me so.' I can still feel what he did, in my body, standing here, right now."

Then, prior to Ramsay being eaten alive by his own starved hounds in the "Battle of the Bastards," he tells Sansa, "I'm a part of you now."

Thankfully, however, the chance of the Bolton lineage staying alive is highly unlikely, and fans were probably reading into the dialogue a little too literally. But don't take our word for it, take Iwan Rheon's — the actor who played Ramsay.

"How the hell would he know that?" Rheon said, in an interview with the Daily Beast, published Tuesday. "That'd be quite a tricky thing for him to tell, I think. Yeah, no. I think that's people reading into it too much."

Additionally, Liam Cunningham, aka Ser Davos, was equally unconvinced. Speaking with the Huffington Post, he said he also saw Ramsay's parting words as a symbolic meaning for the damage he's done to her. In the same way that Theon Greyjoy won't ever be the same after seasons' worth of Ramsay's torture, that notion applies to Sansa. Also, per Cunningham, Westeros doesn't have pregnancy tests, so far as we know.

"Unless he's got one of those Game of Thrones pregnancy sticks, he's not gonna know," he said. "I think he's saying he's put himself into her head. That's what I took from it. She's never gonna get rid of him because of what he's done to her. He knows what he's done to her. It was off camera, what he was doing to her, but we all know what it was. But I think he's placed himself in her soul for all the wrong reasons."

Therefore, fans can rest easy knowing with near certainty that Sansa isn't pregnant. Instead, they should be concerned about her true intentions during the battle, and why she didn't tell Jon Snow about Littlefinger's army. Perhaps, with that knowledge ahead of time, Jon would have avoided being trampled by his own men.