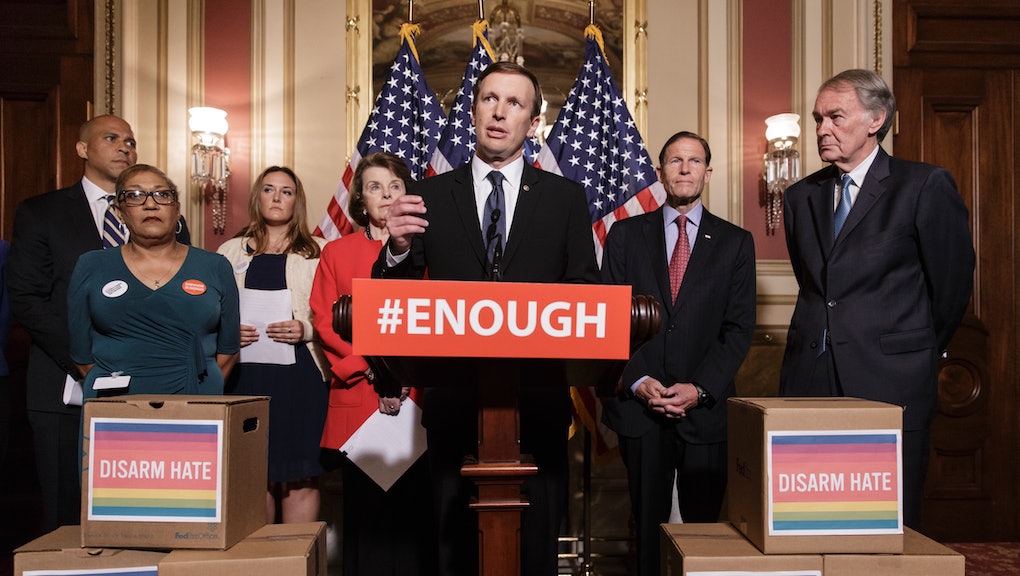 Sen. Chris Murphy on His Senate Filibuster and the Politics of Gun Violence

Shocking incidents of gun-related violence have horrified people on both sides of the pond in recent days.

In the United States, a man killed 49 people and injured more than 50 others at Pulse, a gay nightclub in Florida. And in the U.K., Britons reeled after the shooting and stabbing murder of Parliament member Jo Cox ahead of the contentious Brexit vote.

"Certainly something isn't adding up when you have 90% of the American public who support the anti-gun violence measures that we're proposing," Murphy says in a deep-dive interview on the latest episode of the Special Relationship podcast with Mic senior political correspondent Celeste Katz and John Prideaux, U.S. editor of the Economist.

"This is not controversial anywhere in the country, except for here [in Washington], where, unfortunately, the gun lobby has a vice grip — a vice grip that's loosening every day since Orlando in significant, significant ways, but a grip that right now still prevents these consensus measures from becoming law," says Murphy, who as a congressman represented a district that included Newtown, Connecticut, the site of the Sandy Hook Elementary School massacre.

"That's deeply, deeply frustrating for everybody, but certainly for those of us that have come from states that have been ravaged by this epidemic."

Reports came Thursday that a masked man had opened fire in a movie theater near Frankfurt in yet another example of the rampages that have given new urgency to calls for better gun regulation.

Murphy expressed his anger and frustration — but also his hope for change — as he and like-minded legislators battle the gun lobby for measures including a ban on gun sales to people on the terror no-fly watch list.

He also spoke about how the the fate of stricter firearms regulations could play out under a President Hillary Clinton — or Commander in Chief Donald Trump.

We also touch on the legal and cultural differences between — and the hosts' own experiences with — the American and European approach to guns.

Subscribe to Special Relationship on iTunes, Google Play or wherever you listen to podcasts. Please rate and leave a review, and stay tuned for our sixth episode in two weeks.