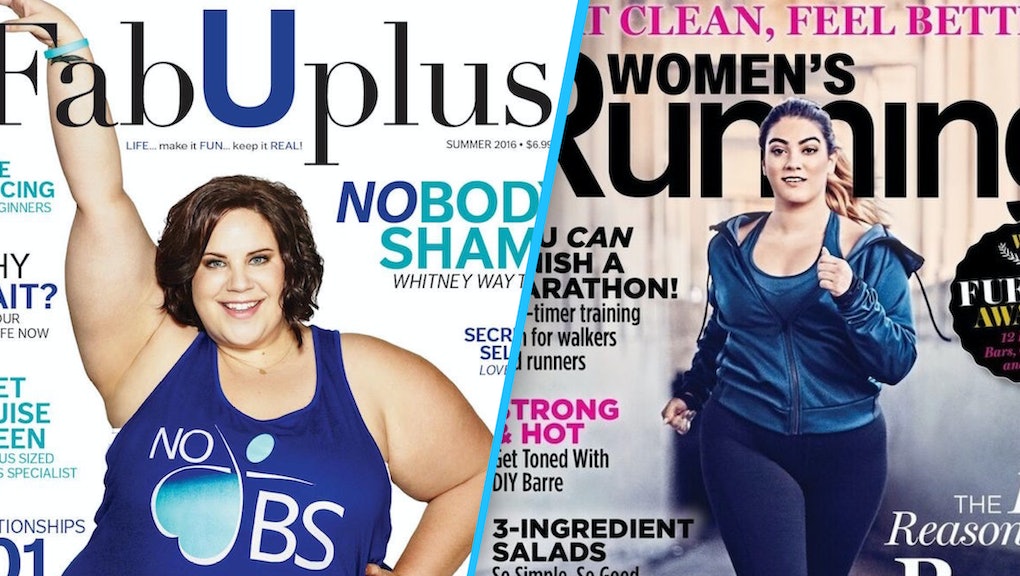 When It Comes To Plus-Size Women and Fitness Magazines, What's Real Progress?

In early June, it was announced that plus-size women would be getting their very own fitness magazine. Called FabUplus — y'know, like fabulous — the magazine was created to cater to plus-size women who want to read about health, lifestyle and fitness without necessarily being told to obsess over their weight.

The mag comes at a time when curvy women are slowly creeping into the magazine world, with Ashley Graham on the cover of Sports Illustrated, Amy Schumer on the cover of Vogue and Melissa McCarthy on Elle. Fitness magazines, however, have been slower to accept women of various different sizes. With the exception of two covers of Women's Running, which featured full-figured women, the landscape of popular magazines are all ripped abs and svelte arms.

So, FabUplus stood as the first of its kind: A health, fitness and lifestyle magazine that not only showcases women of various different sizes, but doesn't equate beauty with losing weight. As opposed to hyping stories about "flat abs" or "how to get lean and sexy in 15 minutes," FabUplus's cover stories include "secrets to self love" and "how to live your best life now."

Already on social media, women have been quick to announce their glee.

But still, there are questions waiting to be answered when it comes to an entire magazine being devoted to plus-size women, rather than an already beloved magazine simply including them.

1. Is this really a good thing?

After all, women above a size 12 don't necessarily exercise any different than anyone else. They don't necessarily have to eat different either. In most cases, they are just as interested in being healthy. Is making a separate entity specifically targeted toward plus-size women doing any good or is it just furthering the "othering" plus-size women face in fashion time and time again, from separate departments to separate stores? Is this separate but equal mentality progress at all?

For the founder of FabUplus, Shannon Svingen-Jones, the magazine is meant to be, above all else, a place for women to feel good about who they are, regardless of their size or shape or whatever. And the reason that's important is that advertisers and marketing execs have long celebrated just one ideal that is often so far away from reality that people are unable to relate to it.

Svingen-Jones, 47, knows this first-hand after years of being a regular consumer of fitness magazines and a plus-size woman, feeling constantly ignored by an industry she had previously looked to for advice.

"It made me feel like I was less of a person because I was plus size," Svingen-Jones, who's based in Vancouver, said in an interview. "No one represents me. There are more than 100 million women who are a size 14 and above in North America. There's nothing wrong with me. I run races, obstacle courses. There's nothing wrong with me. Why am I made to feel bad about myself?"

By Dec. 1, she launched her website for FabUplus, which has similar content as the print magazine. From there, she met with a number of body positivity and acceptance activists and found out what they really wanted: A print magazine that focused on health, wellness, beauty and fashion that featured women with various body types.

FabUplus's first issue went to print on May 1. On June 1, it hit newsstands in Canada and the United States. Eight days later, Barnes and Noble told Svingen-Jones that it had already sold 500 copies in just eight of its stores. Her website receives a reported 5,000 hits a day.

For Svingen-Jones, she says the ultimate goal of her publication is to help women unlearn some of the more damaging fitness and health advice they've learned from publications like Shape or Women's Health, which are just two of the largest fitness magazines that have yet to have a plus-size cover star.

"It's all about making women feel good about the body they have," Svingen-Jones said of her content. "Beauty, lifestyle, relationships. One of the main reasons I started the health section is that when you look up why you should drink water, there a million reasons other than losing weight that it's good for you, but all anyone writes about is how much weight can you lose if you drink a lot of water. The same goes for kale, and there are a million other health benefits other than losing weight."

So, according to Svingen-Jones, yes, women need this magazine, and the reason is that plus-size women are virtually invisible in the fitness magazine market anyway. All Svingen-Jones is doing is showing everyone else how it's done.

"I'm serving a group of women that have never been reflected in media before," she said. "It's what they wanted. Why do we need it? Because it's time."

The same goes for Women's Running, which has made concerted efforts to highlight plus-size women on its covers. "There's a stereotype that all runners are skinny, and that's just not the case," Women's Running's editor-in-chief, Jessica Sebor, told Today.com last July. "Runners come in all shapes and sizes. You can go any race finish line, from a 5K to a marathon, and see that."

Just like Women's Running was progress, FabUplus is too. It's not perfection (which might look more like plus-size women regularly being highlighted in fitness glossies), but it's a step in the right direction.

"I think I'm breaking through in a world they haven't been represented in before," Svingen-Jones said. "Although they may think I'm othering them now, I'm paving the way for them to not be othered. It's very powerful for my readers to stand at a checkout and see it in a line with all the other women. It is very emotional to them."

"It's a sense of feeling like we belong in society," Svingen-Jones continued. "We can be the largest woman who walks in a room and yet nobody sees us. We make up the majority of the population, yet we're only exposed to what like 5% of the population looks like."

Maybe if Shape or Women's Health finally take notice, Svingen-Jones won't have to be one of the only editor-in-chiefs making an effort to include plus-size women in her pages.