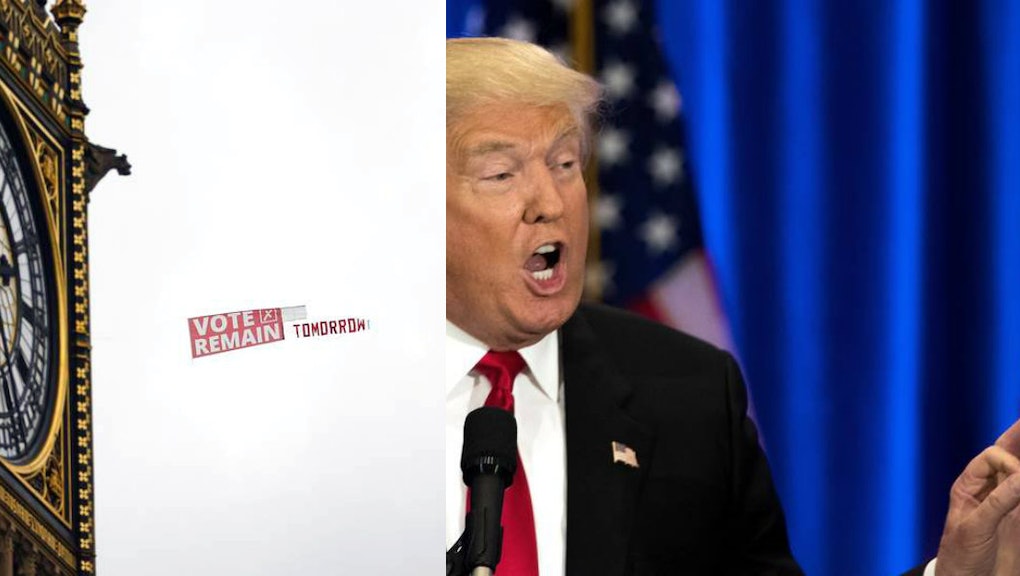 Today Britons have gone to the polls to vote on a referendum that has profound implications not just for the country, but for the rest of the world: whether or not the United Kingdom should stay in the European Union.

A right-wing populist movement in the U.K. has been a driving force behind the "Brexit" (British exit) campaign and it's a movement worryingly similar to Trump's base. It's nationalistic, it's xenophobic, it's inward looking and it's myopic.

If the Brexit succeeds, it would be the British equivalent of Donald Trump winning the White House — in short, it would legitimize the percolating populism across the Western world.

"The success of these campaigns reflects a global political shift that is much bigger than Brexit or the U.S. elections, and it is driven in large part by economics," Fortune's Daniel Alpert explains.

"A glut of global resources has rung the death knell for traditional business cycles in the developed world, creating fertile ground for populists across Europe and the U.S. who are angry about rising inequality and are anti-globalization, anti-immigrant and anti-elite," Alpert adds.

The U.K.-EU relationship has existed in some form or another for over fifty years. Proponents of the EU argue it is beneficial for member states as it creates a collaborative economy, which allows for the freedom of people, money and goods to move across borders.

But members of the Vote Leave camp argue that the EU threatens the country's sovereignty and there's too much regulation, which is hurting the British economy (conversely, there are robust arguments for why a Brexit would, in fact, damage the global economy).

Consider Nigel Farage, head of the far-right U.K. Independence Party, a leading figure in the Vote Leave campaign and a politician with striking parallels to Trump. And consider the Farage-approved Brexit ad, which pictured a long line of migrants and refugees and the words "Breaking point: the EU has failed us all"— the same ad that was reported to the police for its "blatant attempt to incite racial hatred."

Some are concerned that a Brexit could galvanize the movement for Scottish independence. On Sept 18, 2014, Scots ultimately voted in a referendum to remain in the United Kingdom, though 44% of those who voted disagreed with the outcome — not an insubstantial number.

Indeed, it is possible that drastic nationalistic measures, like a Brexit, could reopen the question of Scottish independence, a move that could weaken Britain's military might and, in turn, trigger a panicked domino effect of insularity.

"The Trump people will be overjoyed if Leave wins," Austan Goolsbee, a University of Chicago professor and Obama's former economic advisor, told Politico. "It would say that the same problems we have with accurate polling in the U.S. exist in the U.K. and that the populist element is much stronger than polls say."

If Britain's right-wing populist streak successfully maneuvers the exit of Britain from the EU — regarded as virtually inconceivable for half a century — it would not just rearrange the world order, but it may well be a chilling indication of what's to come. And that's reason enough to care.