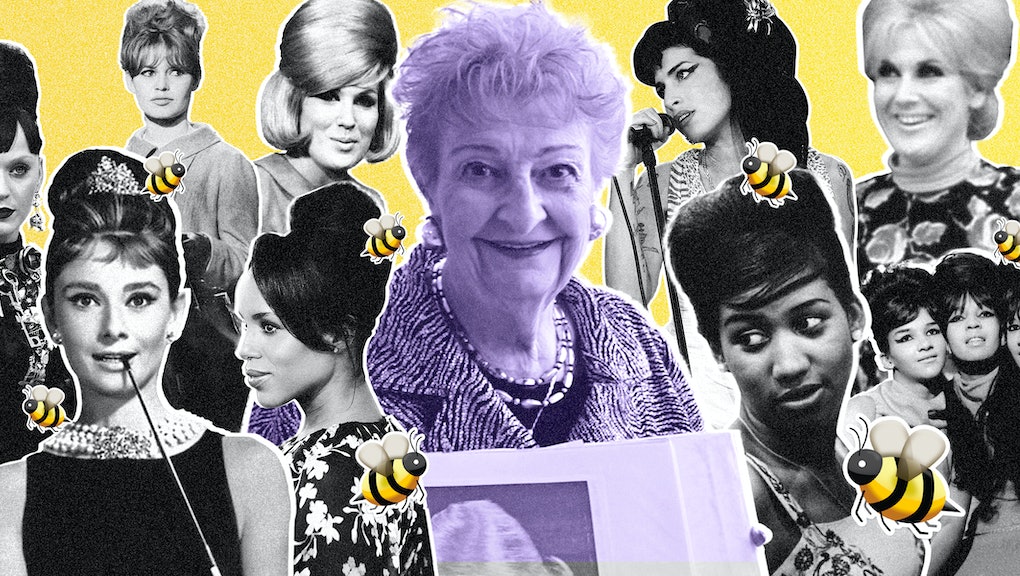 Back-combed, piled high and hair-sprayed within an inch of its life, the beehive remains one of the definitive symbols of being a retro-loving woman with a bit of an attitude (think Fran Drescher in The Nanny). Along with being an iconic hairstyle of the 1960s, it is also a hairstyle with an unusual history — and that has much to do with the woman who started it all.

Margaret Vinci Heldt, who died on June 10 at the age of 98, created the beehive in the early 1960s, with the style's first appearance in the February 1960 issue of the trade publication Modern Beauty Shop, now called Modern Salon.

For years, according to the New York Times, Heldt had made a living as a beautician in Chicago. As a child, she loved fixing people's hair, and after high school decided to go on to cosmetology school. In 1937, she received her cosmetology license, which allowed her to work in a salon. Through the 1950s and '60s, she owned her own salon, Margaret Vinci Coiffures, which quickly became a buzzing salon on Michigan Avenue in the Windy City.

By the 1950s, she had won a competition for national hairdresser of the year and her salon was increasingly becoming a sort of local treasure. With people realizing her talents, she began to regularly contribute to Modern Beauty Shop, sending them a selection of styles she supplied to her Chicagoan clients. But it was the almost impossibly tall, cone-like style that looked like a beehive that made her a household name in early 1960.

Just think: A hairdresser who finally makes a name for herself via a hairstyle that looks like something made by bees.

"[The magazine] called me and they said, 'Margaret, hairstyling has gone dead, there's nothing exciting,'" Heldt recalled in a 2014 interview with Modern Salon. "'We have the pageboy, the flip, the upsweep like the French twist, but nothing is happening around the top of the head.'"

"I always would look at that little hat and say, 'Someday, I'm going to create a hairstyle that would fit under the hat, and when you take the hat off, the hairstyle would be there,'" she told Modern Salon.

According to the Times, what made the beehive's unusual shape and architecture possible was the already-popular style of the bouffant, which also required a liberal application of hair spray — an innovation in postwar hairstyling. Back then, hair spray was the equivalent of dry shampoo now: a product that's nothing short of a miracle.

And that's because, much like dry shampoo now, it allowed hairstyles to last for days at a time so women didn't have to wash their hair every day. (In short: It was a gift.)

"I used to tell my clients, 'I don't care what your husband does from the neck down, but I don't want them to touch you from the neck up,'" Heldt said in an interview with the Daily Mail in 2011.

So because of Heldt in 1960, women the world over could ramp up their bouffants, creating sky-high creations with either their real hair, or with the help of a wig. (According to Heldt, it was a magazine writer that gave the style the name "the beehive" early on.)

But the reason for its quick embrace in the '60s from women across America and then the world were the female celebrities who adopted the beehive, like Aretha Franklin, Brigitte Bardot, Dusty Springfield and the girl group The Ronettes. In 1961, Audrey Hepburn was already wearing her iconic beehive in front of Tiffany's with a tiny tiara. In 1964, Barbra Streisand was already appearing on Time magazine looking like, well, this.

Throughout the decade, Heldt's store only boomed with popularity, with women flocking all the way up to Chicago to get their hair in the hands of the beehive's original creator.

From then on, the beehive style has been regularly embraced by female pop stars and actresses, who look to the beehive to give them an elevated (literally) glamour.

Still, to this day, the beehive is seen on red carpets with actresses like Salma Hayek and Kerry Washington wearing them to award shows and pop stars like Katy Perry and Lily Allen donning the style for a retro edge.

But within the past decade, perhaps the most iconic beehive was the one on Amy Winehouse, a songstress who personified the era in which the beehive was created, as well as her own. For her, the beehive was an ode to women like Springfield and Franklin, while also channeling the modern day, roughing her 'do up a bit.