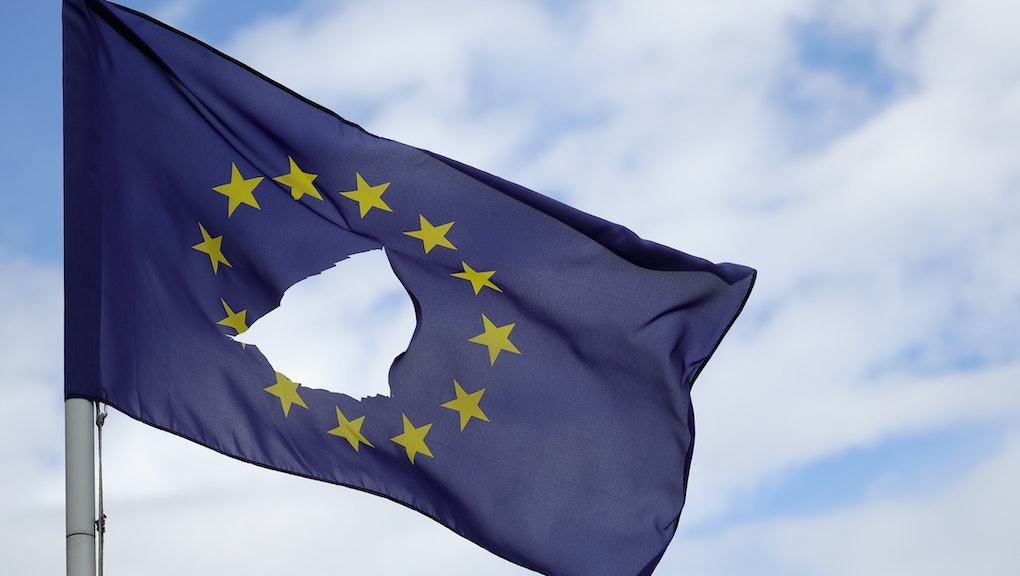 Brexit Update: Here’s the Latest News on the UK Referendum to Leave the European Union

While you were sleeping, citizens of the United Kingdom voted to leave the European Union in an historic referendum — and political, social and economic panic has ensued.

The Brexit — or British Exit — campaign won by a narrow margin, with 51.9% of the votes, leaving almost half the country unhappy with the dramatic decision, adding to the turmoil.

Early Friday, Prime Minister David Cameron resigned in response to the Brexit, which he has strongly and vocally opposed in the months leading up to the referendum.

"I was absolutely clear about my belief that Britain is stronger, safer and better-off inside the European Union," Cameron said, in front of 10 Downing Street, the location of the prime minister's offices and residence. "But the British people have made a very clear decision to take a different path, and as such I think the country requires fresh leadership to take it in this direction."

While the prime minister technically has the power to ignore the vote and defer to Parliament to make the final decision, either would potentially face political consequences for overriding the demonstrated will of the people. Cameron repeatedly said in the run-up to the vote that he would respect the people's choice and his resignation is a clear indication he has no plans to interfere.

The FTSE 100, a composite of the 100 biggest companies in the London Stock Exchange, fell by more than 8% as soon as trading opened on Friday morning. And the British pound plunged in value, the weakest it's been since 1985.

By Friday morning, the total losses for stock exchanges across the globe exceeded $2 trillion. The Dow Jones opened on Friday to losses exceeding 500 points in the wake of the referendum.

Numerous economists argued, in anticipation of the referendum, that a Brexit could slow not just the U.K.'s, but global growth. Furthermore, it could result in massive layoffs in both the U.K. and U.S., as companies feel the pinch of slower growth.

The Brexit has also reopened the case for Scottish independence. Scotland's first minister Nicola Sturgeon said it was "democratically unacceptable" that Scotland would be taken out of the EU without its consent and therefore an independence referendum is "highly likely," the BBC reports.

Major figures in the British private sector have previously argued Scottish secession would damage the British economy, potentially compounding the negative economic ramifications of Britain's leaving the EU. It would likely compromise British military might, too.

There are serious concerns a Brexit would also undermine the Good Friday Agreement, responsible for lasting peace between the UK and Ireland after years of war. Under the agreement Northern Ireland, which remained part of the UK, shares an open border with the Republic of Ireland — a country in its own right — in large part because both are members of the EU (EU member states enjoy porous borders). Withdrawing from the EU may well mean Britain does good on its promise of tightening border control, a move which could easily revive conflict between the two nations.

Lastly, and perhaps most pertinently for the U.S. right now, the success of the Vote Leave campaign has legitimized right-wing populism in the Western world, which, until now, has been largely relegated to the periphery. And this is good news for presumptive Republican candidate Donald Trump.

"The Trump people will be overjoyed if Leave wins," Austan Goolsbee, Obama's former economic advisor and University of Chicago professor, told Politico. "It would say that the same problems we have with accurate polling in the U.S. exist in the U.K. and that the populist element is much stronger than polls say."